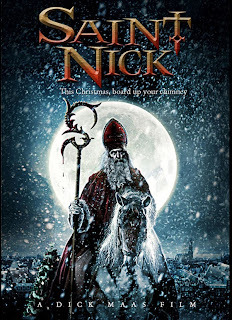 Another foreign movie showing the bloody bad side of St. Nick

So, it begins again, the annual Ruthless parade of Christmas Movies. All of the worthwhile classics have long been watched and reviewed, so I have to sift through the scrap-heap of obscure and awful movies, and see what new Christmas movies might appear on the horizon. I am not optimistic.

Saint, or Sint is a Dutch Christmas horror/slasher movie that depicts St. Nicholas as a child-abducting and murderous Bishop who appears on his birth/death-day every December 05 only when there is a full moon. It isn’t known why to good Bishop has it in for the little tykes, but he snatches them up the chimney, and Goat help any adults who get in the way of his mission.

The lead in to this grisly Yuletide fare are two bloody flashbacks. One occurs on December 5, 1492 when a small village becomes fed-up with the bishop’s murderous ways, so with torches and pitchforks, they dispatch St. Nick and his henchmen with axes to the skull, and pitchforks to the face. There was also a fiery death for the fun-loving Santa on his ship. The next scene features an equally grisly and violent bloodbath on December 5th 1968, where an entire family was dispatched except for Goert, who was fortunately out in the barn checking on the pigs. He returned to witness the massacre of his family. This was some nasty stuff.

The movie should have ended there, but alas, we lurch forward to the present with the inevitable annoying teen-agers and young adults, plus the now 52-year-old, and still traumatized Goert, who is an unhinged police officer. Goert is naturally over the top edgy as another December the Fifth with a full moon approached. What could possibly happen?

Well, as you might have guessed with this type of movie, I could have stopped watching the movie right then and there, but I don’t do that. As you might predict, many of the young and most annoying “students” (who always seem to be in their 30’s in horror flicks) were killed off quickly and violently. This left Frank, who was wrongly accused of the early murders, to team up with whacky Goert to try to thwart Santa and his goons.

Sint was predictable, pedestrian and lame, with just a few good and juicy action scenes. There was not enough of St. Nick and his horse, and too much dull dialogue and predictable jump scares. High points were the actual fights with the zombies and the colorful setting in Amsterdam. Also, St. Nick’s horse was pretty amazing, the way he navigated those rooftops. The English dubbing was horrible, so if you just have to watch this thing, do it with English subtitles instead.

6.5/10.0 With The Goatesians Rating Of: There are better foreign Christmas Horror Movies to watch