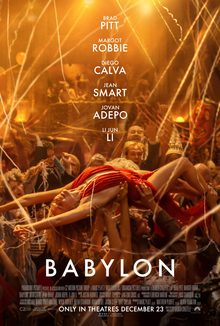 We’re going to need two cigarettes after this romp

It’s a rare occurrence when a movie or series shows something that stops every random thought in my head, every synapse focusing like a laser on the screen. I become Neo in The Matrix when Morpheus leaps to a distant building. “Whoa” is the only correct response. It happened the first time I saw the control room in The Cabin in the Woods. It happened when A-Train liquefies Huey’s girlfriend in the first episode of The Boys. It happened when The Deep accidentally got his dolphin friend killed in The Boys. You know what – it happened a lot in The Boys. That show is nuts.

Babylon managed it three times in its first half hour.

Relax. I’m not going to tell you what they were. That would spoil the fun. What I will tell you is that Babylon is a remake of Singing in the Rain. I owe thanks to my wife for that connection because I have never seen Singing in the Rain. She read the synopsis for Babylon – the film depicts the rise and fall of multiple characters during Hollywood’s transition from silent films to talkies. She started describing some of the things that happen in Singing in the Rain and those same things definitely happen in Babylon, too…but in the craziest ways possible.

(Mild SPOILERS – I promise you I won’t reduce the shock value.)

Manny Torres (Diego Calva) is hired help for a massive party being thrown by legendary actor Jack Conrad (Brad Pitt). Manny is infatuated with movies and is hoping to get any kind of job involved with filmmaking. But first, he has to get an elephant up the hill to Jack’s house for the party. Yes, an elephant. Once there, we are treated to roughly thirty minutes of the most insane party you can imagine. Think The Great Gatsby meets The Wolf of Wall Street meets Eyes Wide Shut. Minutes in and Manny is as exhausted as the audience. Suddenly, a car smashes into a statue and out pops Nellie LaRoy (Margot Robbie). Nellie also wants to make it in Hollywood, but she has her sights set solely on acting. She joins the festivities, the party plays out, and we are left stunned and ready for that cigarette.

But the movie is ready to go again almost immediately. The next day, Jack enlists Manny as his assistant and suddenly Manny’s dream has come true as the two head off to the film sets where multiple films are being shot. Also enlisted is Nellie, though not for the same film as Jack. She is rushed onto the set and told to dance and look seductive. Nellie has been waiting for this moment her entire life and blows the director’s mind. Meanwhile, Manny is thrust into urgent situation after urgent situation (deal with extras, find a new camera). Like Nellie, he’s not about to blow this opportunity and comes through with shining colors. As with the wild and manic party, every shoot happening on scene is just as wild and manic, except without piles of naked people or elephants. By the time the day is over, everyone is spent. The actors, directors, extras, assistants, us. It’s exhilarating and so crazy that even Baz Luhrmann would be slack-jawed.

And there are still two hours left of this three-plus hour film.

Remember, this is basically a remake of Singing in the Rain. We still have to transition to talking movies, Jack, Manny, and Nellie’s character arcs have to actually arc, and people are literally going to sing the song “Singing in the Rain.” As the studio is investing in the transition, all of their big stars get first crack at it. Jack’s current wife Ruth (Katherine Waterson) is a Broadway star and runs lines with Jack while also giving him pointers. Nellie has a very nasal and Jersey-accented voice, coupled with her acting like a spoiled brat. Manny has risen to studio executive, pitching ideas to the studio owners, including featuring Nellie in several films, as well as creating a film featuring a jazz trumpet player named Sidney Palmer (Jovan Adepo). All of their arcs will play out over the last two hours, but with far less energy and ferocity than that first hour. Kind of like the inevitable hangover after any blow-out party.

That’s not to say the film crashes in a heap on the bed. There are still a couple of fantastic scenes left. One features every take of Nellie’s first audio film, me laughing so hard I almost cried. Another features sensationalist journalist Elinor St. John (Jean Smart) lecturing Jack on the sobering reality of Hollywood. Yet another features underworld boss James McKay (Tobey Maguire) making one last gasp at keeping the debauched days of the first hour alive a little longer. I appreciate the effort James, but…WTF!!! Is that a crocodile!? Man, I’m just sooooo tired; I don’t think I can go again.

Babylon is a good film overall, but it felt like it was at least thirty minutes, if not an hour, too long. Much of the film was done exceptionally well. From the costuming to the staging to the acting (Pitt, Robbie, Calva, and Smart were amazing) to the supporting actors to the set designs to the truly shocking moments that littered the film, it’s almost everything we hope for in movies. The problem is the first hour is so exhausting that we’re too tired to fully take in the final two hours. I get that it was intentional. The whole point was to make the audience not just see the transition of the three main characters and Hollywood in general, but to feel the transition as well. And it was done very well, perhaps too well. It’s possible that not even Damien Chazelle (writer/director) was expecting the first act to blow it out quite like that. So, he’ll just have to excuse us for falling asleep before he was done.

Rating: Don’t ask for any money back, but maybe a third cigarette.