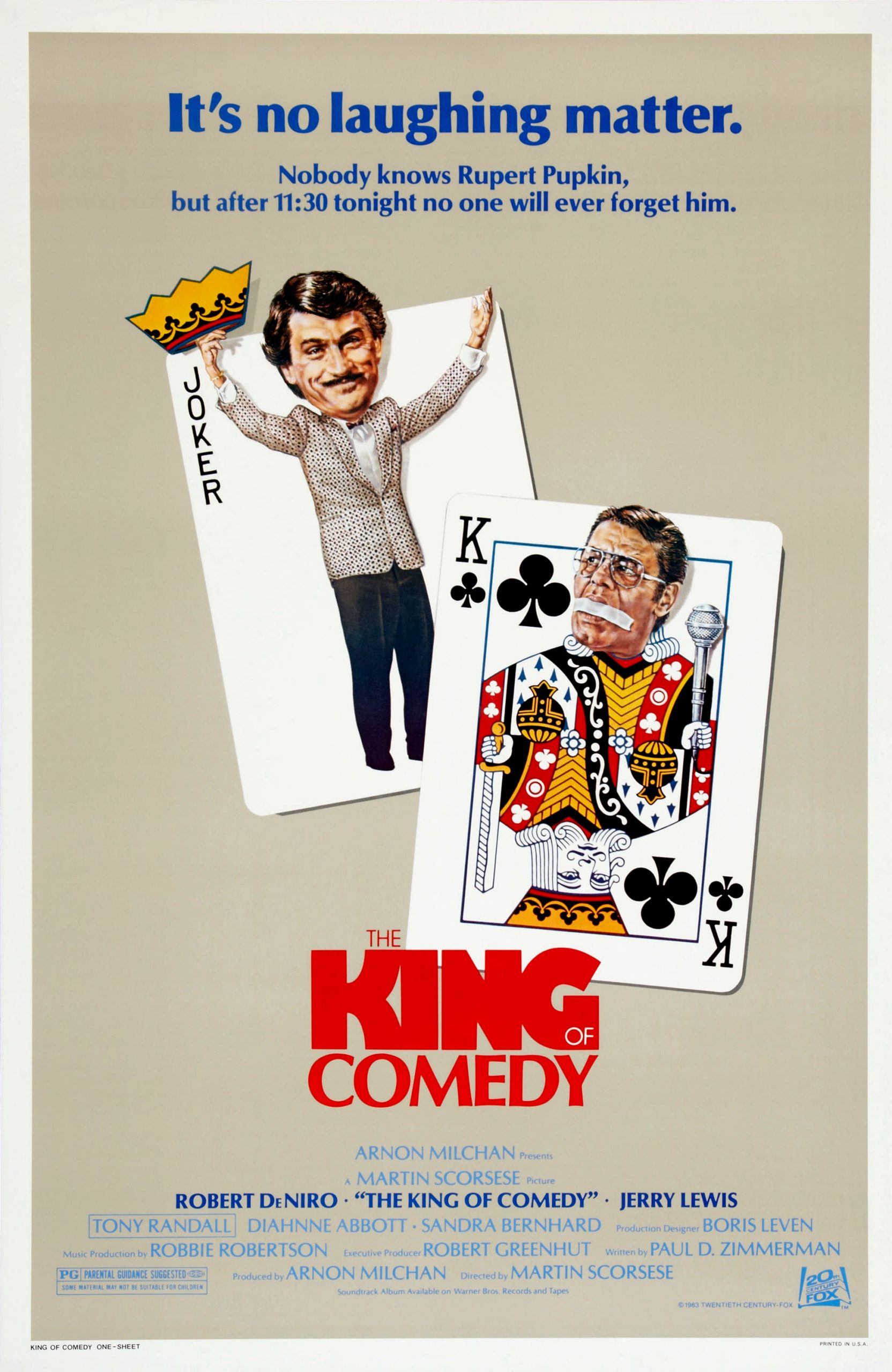 It's No Laughing Matter

A comic failure stalks and kidnaps his idol

Scorsese’s cinematic partnership with De Niro is among the most legendary of the twentieth century, hemorrhaging up blood-soaked classics like Taxi Driver and Goodfellas. It wasn’t all plain slaying, though. Just take a look at the headache-inducing musical New York, New York in which De Niro argues nonstop with Liza Minnelli. Then there’s the redundant, painfully overlong Irishman, a 2019 flick that only tells me they should’ve called time with the nasty (but groovy) Cape Fear remake.

King of Comedy is a middling effort, loved by plenty and clearly influential. Still, it’s not hard to see why it flopped by casting an over the hill Jerry Lewis while allowing De Niro his first stab at comedy. He might have just won an Oscar for Raging Bull, but cinemagoers were probably too used to seeing him killing people (or at least beating them up) to handle such an abrupt change in persona. King of Comedy also didn’t help itself with an exceptionally dull promotional poster and a confusing tagline: It’s no laughing matter.

A comedy that’s no laughing matter?

The story: In Wayne’s World, Wayne and Garth sometimes drop to their hands and knees to worship a favored celeb while wailing: “We’re not worthy! We’re not worthy!” This ostentatious display might be played for laughs, but it also appears spontaneous and compulsive. Are there really dweebs out there who dissolve into a quivering mess by the mere presence of someone like Alice Cooper? Well, I guess if I consider a phenomenon like Beatlemania, that’s a bloody naive question. Not only are there people who scream and faint, but there are those with much more sinister intentions. After all, Lennon was murdered while Reagan managed to survive an attempted assassination only a short time before the release of King of Comedy. Here the growth of creepy celebrity fixation is satirized in the form of Rupert Pupkin (De Niro), an aspiring stand-up comedian who desperately wants to be as famous as his hero, the late-night TV chat show host Jerry Langford (Lewis).

If at first, you don’t succeed…

Why it works: The performances. Christ, De Niro is excellent. You can’t really forget him down in the basement surrounded by cardboard cut-outs of stars pretending to host a chat show while his mom yells at him. Neither can you forget him haunting Langford’s office as he waits for his big break to somehow begin. This is a pitch-perfect portrait of a deluded, pathetic fantasist, his lust for fame so palpable you can almost see it oozing out of his pores.

Lewis also nails his role as the put-upon and abused TV host. Look at his reaction upon the overbearing Pupkin elbowing his way into his chauffeured car. Langford doesn’t say much on the back seat, but the disdain and frustration is captured in the tightness of his face, his pursed lips and the placatory, non-committal replies. Langford has been here many times before and knows damn well he’ll be there again. He’s very good at communicating that fame is a peculiar form of hell in which you constantly have to endure people who run the gamut from ingratiating and insincere to leech-like and dangerous. To be sure, a simple walk down the street can be the stuff of nightmare (“You should only get cancer!”) Quite clearly, the hoi polloi are like blind baby birds feeding on his mental and emotional wellbeing. He finally loses his rag when Pupkin turns up uninvited at his country home, leaving the audience to chortle and nod as he delivers the line: “Did anyone ever tell you you’re a moron?”

Elsewhere, Langford’s office-based foot soldiers do a good job at illustrating the fine art of the brush-off. Gee, the first seventy or so minutes of the prescient King of Comedy are tremendous. It’s an ideal companion piece to Network.

The things against it: King of Comedy is a PG flick. Oh boy, I wish it’d been aimed at adults. Then we could have enjoyed a much darker vision and greater unpredictability. As a result, Pupkin feels like Travis Bickle’s nicer older brother. For all his lunacy he radiates surprising little threat. He’s persistent and inept rather than dangerous. And why do we never see him perform his stand-up in New York’s bars and clubs? This has always struck me as a big missed opportunity to inject pathos, cringe, grit and genuine laughs into the mix. For the most part all Pupkin does is talk and act out, but it would’ve been better to see him dealing with an up-close audience comprised of drunken hecklers, indifferent assholes and piss-taking MCs. At least that way we might begin to understand how hard it is to get somewhere in the world of comedy, even if you start in the right places rather than endlessly pestering an established star.

Plus, how does Pupkin support himself? A job is never mentioned. How is he so well-dressed? And why would a former cheerleader like Rita (Abbott) have anything to do with him, especially as she already knows he’s a loser from school? Of course, there’s a fair degree of truth that comedians are not particularly funny away from their onstage act, but you can’t detect any humor bubbling away in Pupkin. It’s obvious Rita finds him corny and boring. Just look at her face where he unironically hands her an unrequested autograph, telling her how much it’ll be worth one day.

I also don’t care for Sandra Bernhard’s snarling character, Masha. Resembling Bob Geldof’s Spitting Image puppet, she’s merely an amped-up female Pupkin. There’s no need for her shouty character because we already have plenty of insight into the obsessive fan/stalker mindset through our main man.

But King of Comedy’s biggest mistake takes root through the kidnapping of Langford. Yes, this is plausible, but soon afterward things begin to horribly fizzle. This is not how cops, the FBI et al deal with this kind of shit. Then there’s Pupkin’s crowd-pleasing performance on Langford’s show. Er, what? Given his lack of stand-up experience and familiarity with a TV studio, how come such a whacked-out klutz is so relaxed and at home during his first broadcast before a nationwide audience? For fuck’s sake, he’s up to his neck in a prison-baiting criminal venture that the authorities know all about. King of Comedy lets itself down by abandoning Pupkin’s meticulously built-up, agonizing reality and instead falling headlong into his most fervent daydream. I’ve tried to interpret its lengthy climax as fantasy, but that doesn’t work no matter how I approach it. How can it be make-believe if an exhausted Langford is watching Pupkin make it big? All I know is that as I listen to Pupkin’s overlong and fucking lame brand of comedy, the movie has gone in the wrong direction while sinking ever deeper into the rankest implausibility.

Verdict: King of Comedy should be watched, if only to remind you how shit and phony the average chat show is. It’s an often-fascinating look at celebrity fan culture, happy to depict an ever-growing bunch of sad sacks who believe a photo, a handshake or some form of acknowledgement from an overpaid celeb somehow validates their existence. Why don’t these people have any self-worth? Why do they act like they’ve got their noses pressed up against the glass? “It’s not my whole life,” Pupkin tells a fellow autograph hunter at the start, but it’s not long before we grasp that his weird obsessions and fame-chasing fantasies are just as potent and enveloping as a serial killer’s. His life is one long act in which he does everything he can to keep reality at bay. De Niro would have better box-office luck mugging for the camera in an inferior comedy like Analyze This, but there can be little doubt that Pupkin is a key role in his career. However, King of Comedy’s nonsensical, step-too-far finale betrays the movie.