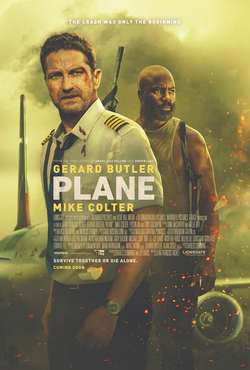 A pilot is forced to land a storm-damaged commercial plane in a war zone.

After the disappointing but perfect-for-January M3GAN, I fully expected Plane to be perfectly January as well. Plane stars Gerard Butler. We don’t need any other information than that to set our expectations. Butler’s filmography contains thirty-eight films (not including Plane or animated films) and just eight of those films have a positive score on Rotten Tomatoes. It didn’t help that the trailer for Plane seemed to promise the same premise featured in scores of crappy action flicks – a couple of guys with special skills, but down on their luck, will team up to take on an army of heavily armed bad guys to save the day. Yes, that setup was indeed present, but the film executed it in a way that was far more April than January.

Commercial pilot Brodie Torrance (Butler) is in the middle of flying a sparsely populated plane from Singapore to Japan when lightning strikes the plane, knocking out all power. Torrance and co-pilot Samuel Dele (Yoson An) have just ten minutes of backup battery power to bring the plane down and attempt a crash landing (sea or land). This event covers the first thirty minutes of the film and it’s done well enough to make the audience grip their armrests and assume crash positions.

In case you are wondering, lightning striking airplanes in flight happens regularly. I mean frighteningly regularly. In fact, airplanes are frequently the cause of lightning when flying through storms. Rest assured airplanes are designed to withstand lightning strikes, specifically protecting the sensitive electronics from being destroyed to avoid exactly the situation presented in Plane. I’m not saying the scenario in Plane could never happen. I’m saying you can give the armrests a break.

The beauty of the opening thirty minutes is the near absence of nonsense. We see the flight crew going through pre-flight checklists. We get a glimpse of a corporate bean-counter talking weather and fuel cost with the pilots. We watch the pilot and head flight attendant greeting boarding passengers. And we listen to the same pilot spiel given at the start of every flight, albeit with a bit of gallows humor thrown in. And the post-lightning strike is more of the same. Checklists, cabin announcements, “PLEASE SIR, STAY IN YOUR SEAT!” With the exception of a flight attendant getting out of her seat during the worst of it, the entire sequence is very believable and realistic, creating a high level of suspense despite the film’s synopsis telling us Torrance will land the plane safely.

Once on the ground of an island, Torrance addresses the survivors, apprising them of the situation. All power on the plane is out, but co-pilot Sam is going to try to get the power back online. They have no way to communicate; there isn’t even a cell tower on the island. Torrance is going to look for a facility they passed, hoping to find a phone or people to rescue them. That is the remainder of the film, spiced up when Torrance later discovers the island houses an army of anti-government Filipino separatists who will ransom and kill them all if they are captured. On his initial journey, Torrance decides to take passenger Louis Gaspare (Mike Colter) with him, because…wait, who is Louis Gaspare?

Notably, the film refuses to develop any characters on the plane besides Torrance, Dele, and Gaspare, not even giving any of them special skills to help escape the island. The film doesn’t want the audience to emotionally connect with any of the side characters in order to avoid the audience expecting certain characters to survive. In a film this simplistic, side character development would kill the suspense. They are nothing more than damsels in distress.

Unfortunately, the writers decided to give Gaspare an unnecessary back story where he is an accused murderer being extradited to the United States. Realizing the uselessness of this fact mid-movie, a quick explanation is thrown in that Gaspare’s crime was “being in the wrong place at the wrong time” and that he joined the French Foreign Legion to avoid capture and prison. That explains his soldiering skills, making the murder subplot extraneous. Luckily, that’s the only part of the movie that strays into a January-esque subplot.

As I said, the movie works precisely because it is so simplistic. The only bit of complexity comes in the form of the airline’s owner Hampton (Paul Ben-Victor) hiring a fixer named Scarsdale (Tony Goldwyn) to run the rescue operation, which includes a team of mercenaries to extract the survivors. While this team may seem like a bit of a deus ex machina (would an airline really hire private mercenaries for any reason?), they are necessary to the plot to keep Torrance and Gaspare from turning into near-invincible 80s action stars. As for Hampton and Scarsdale, they also toe the line of 80s action flicks. They are only seen in the room that appears in every hostage movie – the room with the big table and lots of people furiously doing nothing as they sit at the table while the guy in charge (in this Scarsdale) barks commands at everyone. As with everything else in the film, everything and everyone is the bare minimum, existing solely to reinforce that this movie has a one-track mind. Rescue the survivors.

What caught me so off-guard was a level of competence rarely seen in movies released so soon after New Year’s Day. The film never strays from its plot, has no side plots to get sidetracked by, and no stupid arguments between people who are on the same side. Plane also features another January unicorn – solid acting. Everyone doing exactly the right amount their character requires, no more, no less. Most impressively, the cinematography is done well, notably leaning heavily on close framing of characters during action scenes to keep the audience’s eyes from wandering around the screen. By the time the credits rolled, I was quite pleased with a film I expected no more from than to confirm Gerard Butler has officially assumed the mantle of patron saint of bad January/February action flicks from Liam Neeson. Plane makes me wonder if my calendar is broken.

Rating: Don’t ask for any money back, probably for the only time this month.