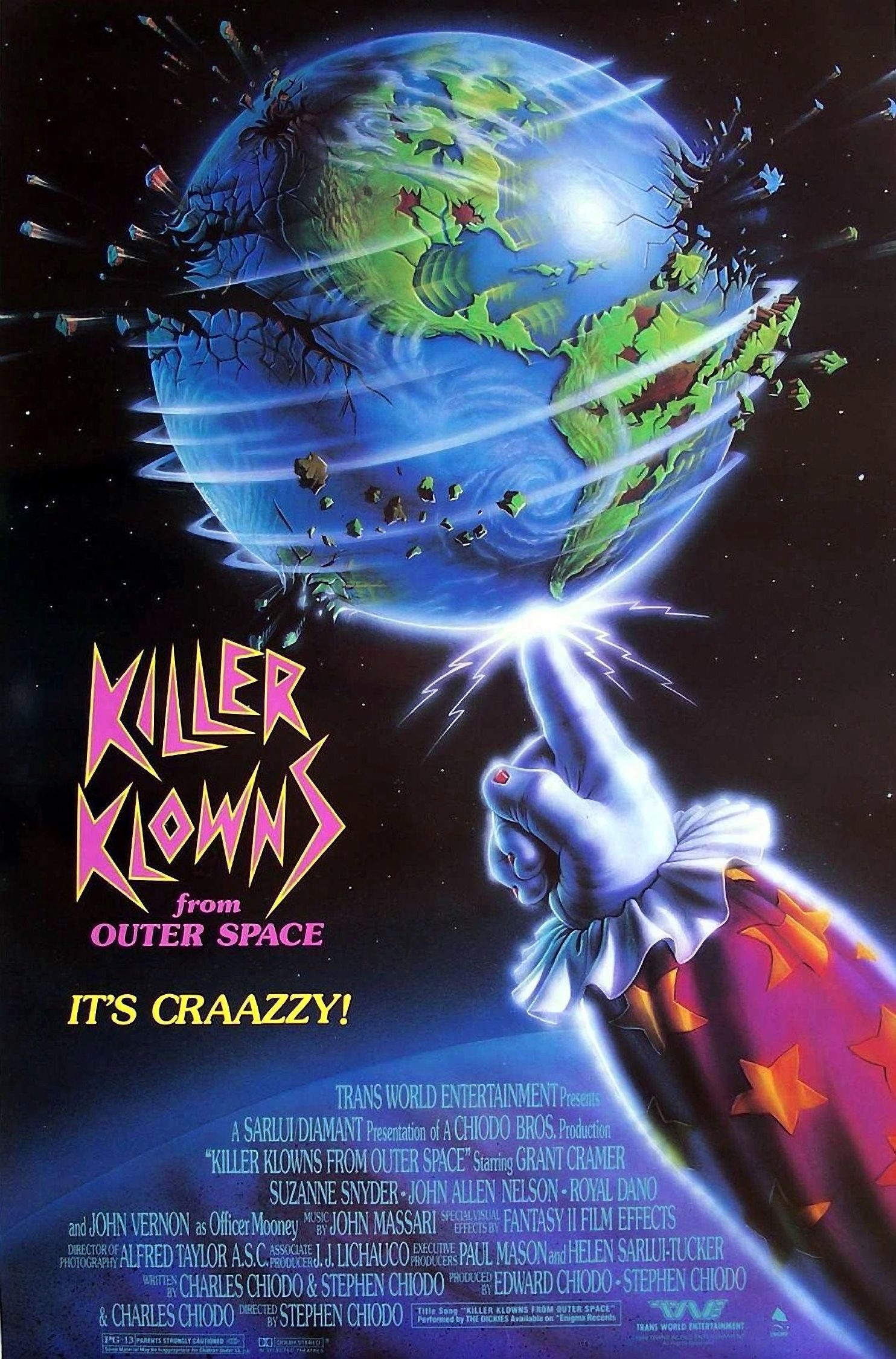 Aliens from outer space, dressed as clowns, terrorize a small town with cotton candy and popcorn. Why not circus peanuts?

Someone sent me Killer Klowns from Outer Space years ago; I think it was Steen or someone from the Roofless Forum. I’ve never bothered to watch this thing until tonight, and I’m glad I did. I didn’t realize that the great John Vernon was in this movie, reason enough to give this thing a spin via Prime Video. Yes, the Klowns have landed, so get ready for every circus cliche ever foisted on an unfortunate viewing audience.

The influence of earlier horror flicks is immediately apparent as we see the mischievous teens vs. the unbelieving and annoyed police, like in the ground-breaking movie, The Blob. We also notice the Klown’s not so subtle cocooning of humans in pods, made of cotton candy. I mean, these Kreepy Kolorful Klowns are actually having a parade down main street, tossing their victims out of 2nd floor windows, to their hench-klowns below. Great stuff!

The plot of this film is as predictable as it is irrelevant. What is important are the garish clown costumes and antics, as well as the human clowns and police, who try to save the day with all the aplomb and tact of Benny Hill. Let’s be realistic here. If you can’t figure out what you are in for after seeing the title to this mess, then you have no business operating a remote without supervision.

Killer Klowns lived up to its colorful creepiness throughout the movie. The dialogue was predictable and almost childish, but the film moved at a great pace throughout, and did not take itself seriously for a moment. The unwanted visitors had all the manners and charm of Beetlejuice and the terrifying tact of Pennywise. There was even a G-Rated bathtub scene that was pretty lame and tame compared to the one in Jack Frost.

Killer Klowns is one of these “bad” B movies that was 86 minutes of pure joy. The costumes and sets were outstanding and never once was I put off by the meaningless and trite script. One was not really needed as this movie was all about the hilarious slapstick action, and what would those Klowns do next? Watch and find out, the entire movie is available free on YouTube.

7.0/10.0 With The Goatesians Rating of Bring Your Own Popcorn