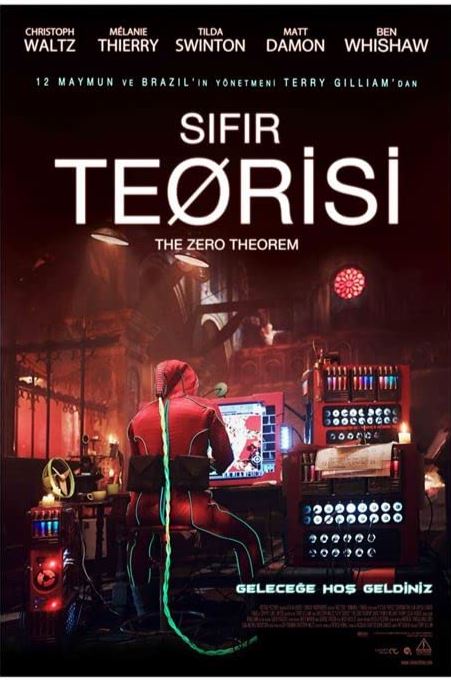 They say that to really understand someone, you need to see inside their house. If the same thing goes for movies and minds, I think I like Terry Gilliam. He was once a member of the legendary Flying Circus of Monty Python, and since then wrote, among other things, the screenplays for such awesome movies as Fear and Loathing in Las Vegas, and Brazil. And now, if now was in 2013, he made another one.

It’s called The Zero Theorem and it stars Christoph Waltz as Qohen Leth, a hacker/slash/computer-programmer that works for Mancom, a nearby future company in some nearby future world as envisioned by Terry, that tries to find the meaning of life, by chucking algorithms at it.

The visual style of this movie somehow reminded me of that of The Fifth Element, from Luc Besson. I could easily imagine how this story could have played out on one of those many levels that Bruce passed while diving his flying Taxi deep into the dark, misty bowels of this ugly, godforsaken world…

Qohen schrikt zich natuurlijk even helemaal het ape-zures en krijgt vrijwel spontaan een hartverzakking. Hey, did you see what happened there? I spontaneously went into my mother’s tongue, for a minute. Wait, that sounds wrong… I mean… [EDITOR’S NOTE: No one cares]

‘You’re quite insane, Mr. Leth’, says Management to our dear Qohen. Is he right? Is Qohen insane? Well, that depends, like with a lot of things, on your definition. “Insanity, madness, lunacy, and craziness are behaviors performed by certain abnormal mental or behavioral patterns”, says Wikipedia, but hey, what do they know, right? Mental or behavioral patterns? Fuck that. This movie is great. Just find it, somewhere, and watch it. Preferably alone, while under the influence of as many drugs and booze as possible. I did, and it was an awesome trip.

I have to spread my eagles now, dear people, and leave you to it. May the force of Gandalf be with you, forever and ever, and may the true horrors of authentic insanity never find you, in any shape, nor form. Because if they do, Terry will be there, and make some awesome movie about it.