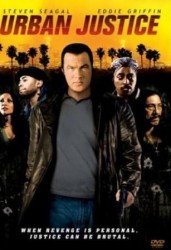 Sure.  Seagal is some mysterious spook type whose cop son appears to have been gunned down by  mysterious spook types in a random gang shooting.  After murdering and beating every ganger banger he can find, he discovers that it was a bad cop who pulled the trigger.  Oh well.

Evidence That The Script Was Written by Paddy Chayefsky:

Compared to other Seagal 90’s Inaction, this is a gem.  It plays to Seagal’s strengths, which is smart on a low budget, because it doesn’t cost anything extra for Seagal to push one of his son’s killers against a wall and just kick him in the balls over and over again.  There is probably the worst car chase scene I’ve ever seen, but that’s not the script’s fault and the dialog is largely pain free.  Probably the worst written part is that, although he kills over 40 people, Seagal keeps saying “I don’t care who ordered the hit, I just want the shooter.”  Why wouldn’t he care who ordered the hit?  I mean, if it were me, and I had to pick one of the two, I’d kill the guy who pushed the button rather than the drone who pulled the trigger.  Still, I actually enjoyed this one.  If you really want a good cringe, here are a couple of quotes attributed to Seagal on his Wikipedia page:

Eddie Griffin?  I didn’t know he’d fallen so far.  In any case, his career problems are a blessing unto me, because Griffin is the deciding factor that pushes this film into being a worthwhile addition to the Seagal cannon.  All of the best lines are his.

Expressing disappointment in his crew’s inability to eliminate Seagal:

“Do I have to buy you dresses? Ya’ll want mini skirts, tutus? Dip your motherfucking ass in hot olive oil, put you in roller skates?”

Frustrated and no longer feeling amorous, he tells the young women he has been hosting that he no longer desires their company:

“I haven’t killed a bitch in a week, goddamnit.” (Cocks gun, walks of screen, we here the sound of a gunshot.)

“Fuck Santa Claus. He never got me shit. That’s why I sell dope”

At long last I’ve found a DTV Seagal flick without a shit tornado for a plot, that’s not trying to ape the aesthetic of Kill Bill and that has no zombies other than Seagal himself.  Someone kills his son and he spends the whole film beating and killing anybody between him and finding the shooter.  Was that so hard?

When revenge is personal, justice can be brutal.  (What?)

48, a lofty total for Seagal. And yet he beats and cripples as many people as ever. I have to ask again, don’t the producers know that this is all we want and is it so hard to deliver it?

This is one of my favorites, for personal reasons. In fact, it was kind of a comfort kill for me. Seagal’s beaten his man into a stupor. Then he slaps on the Camel Clutch, which happened to be my go-to finishing move when wrestling my friends. Here’s a hint. If one of your friends is a bull necked football player who would rather die than lose to your Hessian ass, a few chops to the back of the neck will soften him up. Another tip, if you’re wrestling with friends, don’t pull back so hard that you break the guy’s neck, as Seagal does here, even though it is awesome and would probably be the highlight of your life.

Seagal regards himself primarily as a sex symbol. And deep down, you know he’s right.