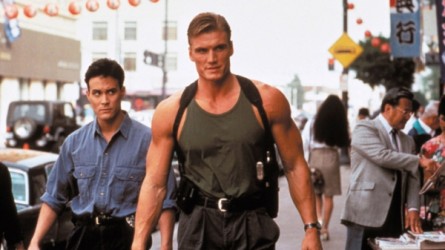 
Brandon Lee might be a famous name, but he’s a one-hit wonder in more ways than one. He had one actual box office hit with The Crow. Most thinking people, of course, recognize that The Crow is terrible. However, he had one legitimately good film that was a hit among more astute viewers in Showdown In Little Tokyo. Also, he got hit by one bullet. Everyone knows this was because his father stole a jar of powdered giraffe penis from the Hop Sing Temple back in China, providing the potency that would allow Brandon to be conceived. But the monks put a retributory curse on his family and both Brandon and his father died under bizarre circumstances. Tragically, the curse of the Hop Sing Monk was not powerful enough to kill The Crow franchise itself, and it would go on to be more prolific and profitable than Lee was in his own, short career.

You might not realize how little work Lee actually did before his death. He has 10 acting credits on IMDB. One of them is “uncredited,” another is “Man in Line to Nightclub,” in a video released years after his death, and surely done with the best taste possible. Four are spot TV work. Besides Showdown and The Crow, he really only had one role that shows up on radar, the small, 1992 blip, Rapid Fire.

Lee did leave a positive mark on the world. In Showdown In Little Tokyo, he utters the gayest line in 80’s Action history. Lee and Co-Star Dolph had previously engaged in a literal bathhouse battle with the Japanese mafia and facing probable death, Lee turns to Dolph and says, and I quote verbatim, “In case we don’t make it, I want to tell you, you have the biggest dick I’ve ever seen.” Where do you go from there? It’s the G.G. Allen of gay lines. The film has much else to recommend it, but Lee has earned a place on the 80’s Action walk of fame with one line and one starring role.

Perhaps the Hop Sing Monks are wiser than we know. Had Lee gone on with The Crow franchise, he might now be known as an icon to noncommittal goth type kids around the world, and a source of shame to the 80’s Action family. He clearly lacked the acting chops to do much else, although perhaps he would have eventually been relegated to direct to video glory and turned out more quality work there, as so many of his contemporaries have. We will never know. Good night, gay prince.