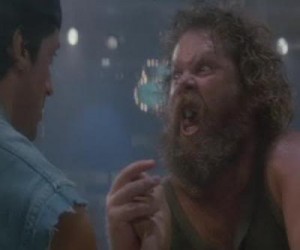 John Grizzly, Over the Top

One movie. One character. Cinematic immortality. Few in the history of the silver screen have ever dared a one and done, but for Bruce Way, there never really was an alternative. He came to us without any preconceptions, unasked and unknown, like Shane from the wilds of a still untamed West. It was 1987. We were weary from nearly eight years of Reagan, and we needed a hero. One was born the day Over the Top hit theaters, and because he left as quickly as he arrived, his legend would be secure. The man was John Grizzly: the roughest, meanest, toughest, most wild-eyed maniac in the entire run of 80s Action. He blew in like a bearded hurricane and left no man standing. Though arm wrestling was his craft, he was the ultimate visionary; a gifted, sweaty icon who went beyond performance art to achieve a burly, near-mythical transcendence. He wore fatigues. He inhabited a F.U.B.A.R. tank top like a second skin. He smacked himself about the face and head without pain or regret. He chewed  and swallowed  a lit cigar. He drank motor oil like it was squirrel piss. Valvoline, if there was ever any doubt. And when he emerged victorious  and my god, how he emerged  he was more than triumphant; his roars were the guttural cries of a wounded race, and he was their champion. Our champion. With the biceps, body hair, and flared nostrils to prove it.

But when he relaxed, say, for a casual interview at the event that would define his very soul, he had the sweet tone of an angel. Though his words were callous  murderous, even  he was simply a businessman in a rough and tumble game. When I get to the table, he reasoned, That person, I dont care who they are, theyre my mortal enemyI hate them. Who would dare disagree? He was the decade made flesh, winning at any cost  money, friendship, love, and sanity be damned. Few from the era had a greater sense of self; a knowing look at the world and his place in it. Grizzly was boorish, selfish, sick, and twisted into a parody of machismo, but who didnt want to be like him? He pushed ahead without fear or trepidation, and though barely literate and likely not long for this world given his unorthodox diet, there wasnt a challenge he couldnt meet. He was everything the Reagan years aspired to be and often werent, given the limp-wristed opposition. One shudders to think what could have been accomplished with a mere battalion of such men. And though few, if any, know where Bruce Way currently resides, below ground or in a fortified bunker in some unnamed forest, he has the unique distinction of cashing his modest paycheck, turning away all comers, and taking leave while fully on top. Over and above it, Mr. Grizzly.