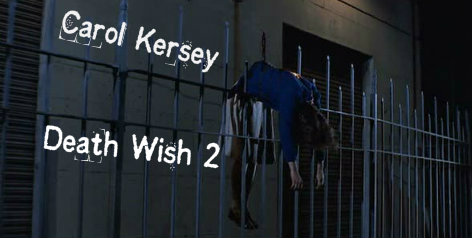 After her devastatingly one-note performance as Carol Kersey, Pauls put upon daughter, in Death Wish II, Robin Sherwood never acted again. Not even on deep, deep background in some forgettable 80s sitcom. She staggered around glassy-eyed, uttered not a peep, drooled over a glass figurine, pawed her ice cream cone, remained insanely stoic throughout a vicious, nauseating gang rape, jumped to her death, and simply closed the book. Though theres nothing to support my hypothesis, I can only suspect that the role was so thoroughly exhausting that she couldnt survive another shoot. Who but the heartiest, most seasoned thespian could endure take after take of suffocating sweat while trapped beneath Laurence Fishburnes dead-weight thrusting? No doubt the nightmares kept her away from future cattle calls; being thrown into a van, beaten about the head, face, and neck, and believing that crashing through a glass window to fence spikes below is preferable to welcoming another care package into her ravaged vagina. Did she dream of ratty beards, dirty fingernails, and the foul breath of the unwashed? Were her nights consumed with blurry visions of surly Mexican housekeepers being stripped to the bone, smashed with bats, and pounded like morning-sun cornmeal? Ill leave that to the therapists.

Still, Ms. Sherwood could not have been a sane woman after her star turn, but lets be thankful that we have it at all. While the Jane Wymans and Holly Hunters of the world collect Oscars for their wordless wonders, no one pays any mind to the action movie mutes who scratch and strain to curry our favor. Who weeps for those who, a decade prior, watched their mother forced to chug thug cock, only to survive just long enough to feel the cold splash of spray paint upon the buttocks? From that day on, Carol never spoke again, and though the screenplay lacks details, what of surviving a divorce and being sent to an institution where the only salvation is a bevy of humorless nuns who see rape as the ultimate heavenly cleansing agent? Her martyrdom is beyond dispute, for had she not been led away by that gang of thieves, only to die by her own hand, what would have inspired the mad architect to keep on killing? Had she lived, even though shed been raped so many times that ejaculate could double as perfume, its doubtful that Paul would have gone to the Big Apple to visit an old Korean War buddy. In that sense, Carol died so that Part III might live. Rest in peace, sweet Carol. Now, you belong to the ages.

Let us also consider Carols symbolic power as an 80s-era feminine negation. Because this film came at the onset of the decades eventual slide into cock-filled fascism, her role arguably ushered in the unapologetic misogyny to come. Throughout Reagans administration, women of the silver screen existed solely to be mocked, attacked, sodomized, victimized, brutally dumped in various staged of naked, and, when the gods were generous, used to reignite the masculine juices of our flaccid heroes. At no time were they consulted, debated, engaged, or treated as equals. Yes, they could scream for help, roar in agony, or beg for a second round of uppercuts, but no conversation, please. Simply ask the man to remove his skin-tight jeans, and make yourself scarce. Carol made it even easier: dont say a word, shuffle around like a dope, and end your life to spur on the gents. Yes, papa will do. Hell kill for you in kind, though well know hes trying like the devil to recapture the erection he lost when Nixon stepped down. The babes of 80s Action were our barometer of belittled humanity; as our societal pin cushions and voodoo dolls, they failed to register unless on their backs, topless, and utterly blank. Carol, against the odds, was our pathfinder; the Amelia Earhart of action lady emptiness.