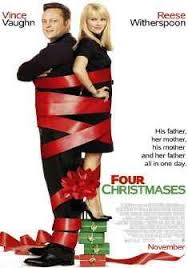 A couple we’d like to see divorce, visits all four of their divorced, entitled, boomer parents.

Twas the week before Christmas, and all through our house,

Not a brain cell was stirring, I felt like a louse.

The movies were calling, though shit was the fare,

Four Christmases!” I shouted, lets go, if we dare.

The Dodge Ram was nestled, all snug in its shed,

While visions of Shithouse danced in my head.

And mama in her pea coat, and I in my cap,

Were off on our way, for some cheap holiday crap.

When there on the screen arose such a clatter,

I sprang from my seat, my heart pitter-patter.

I roared like a lion; such madness, such trash,

I tore at my hair, my wrists I did slash.

The bullshit before me, my anger did grow,

When, what to my incredulous eyes should appear,

A message so vile, so awful, so sick,

I knew in an instant, this directors a prick.

More nasty than Limbaugh, his cause to defame,

No children, no soul, we all were the same!

Get married, settle down, theres cribs to be fixin.

Youre selfish and evil, so death be to all,

Who spurn hearth and home, and ignore heavens call!”

Lord Jesus brought fog, now no one could fly.

So instead of warm Fiji, with waters so blue,

Theyd visit their parents, roll eyes, but make do.

And then, in a twinkling, Kates rage went a-poof,

She holds a dear child, while Brads on the roof.

Its cries turn to laughter, itflips Kate around,

Down comes her guard, her purpose is found!

Til now shed been empty, all that now kaput,

She wanted a husband, many babies afoot.

But Brad loved their lifestyle, it all seemed on track,

Vacations and free time, wild times in the sack.

Look at our families, he cried, So sad, not at all merry,

They fight and they scrape, you see why Im wary.

And look at us now, were rolling in dough,

Great jobs and such freedom, they envy us so!

With that I got sick, began grinding my teeth,

I knew what was coming, what was lurking beneath.

Like a cult attracts the lonely, as p.b. needs jelly,

The childless are doomed, like a pre-teen with R. Kelly.

The film had turned somber, despite the tits on that elf,

Who caught my attention, in spite of myself.

The only bright spot, in a film filled with dread.

Except as a think-piece, for conservative jerks.

Women must breed, til they dry up I suppose,

Shared fun is appalling, as everyone knows.

So I leapt from my seat, and gave out a whistle,

My rage had the focus, of a Tomahawk missile.

The lie again stated, as the film went out of sight,

“This world is for parents, as the day follows night.”