AN OPEN LETTER TO SHEPARD SMITH

May I call you Shep?  Great.

I write to you on behalf of a number of concerned citizens at the Ruthless Reviews website, a burgeoning community of progressive, enterprising young men and other men, engaging regularly in respectful debate on the same domestic and international political issues that animate the dinner-table conversation of families across America.

Iconoclastic often, patriotic always, Ruthless Reviews has gained the respect of the serious internet political world with sharp commentary, incisive probes, and flagrant disregard for journalistic ethics. We do this with our unmatched talent for drawing overnight conclusions based on a handful of leaked pseudo-factoids.  And having Kos wedge our theories in on his website once or twice a year.

For example, we know some guys who know Matt Taibbi.  Also, we broke the (incorrect) story that Trig Palin was really Bristol Palin’s child and Sarah took responsibility, even though she really didn’t.  Additionally, one of our admins took a picture with Ralph Reed at the mall, and last but certainly not least you probably heard about a little-known, well-known incident in which one of our members was photographed urinating on President Nixon’s grave.  We are serious players in today’s political arena.

And Shep, it pains many of us so much to still see you consorting with the most despicable scumbags on television this side of a Steve Wilkos marathon.

You’ve been with Fox since Juan Williams wore jheri curls.  Your loyalty is unquestionable.  In 2007, they re-upped your contract for three years at a rumored $8 million a year.  And why not?  Your early evening show, Studio B, pulls in the largest daily ratings for a news program in its time slot.  In surveys of the viewing public, your name is up there with Brokaw and Russert as a credible news reporter during a time when well-crafted spin on behalf of like three multinational conglomerates passes as journalism.  In fact, insider reports suggest that the Big Rupe looks at you as his most trusted anchor in the schedule.

But we’ve all learned that unlike that fat fuck Roger Ailes, Rupert Murdoch is a bit less about ideology than he is about money.  I think the man knows that losing you would turn his entire station into a round the clock circus without a straight man to wrangle the clowns, or without a straight man period, thus leaving only the rabid cretins beating off to Bill O’Reilly’s retarded Pinheads and Patriots segment while twittering Obama death threats on the crawler.

But you know what?  Fuck that crazy Murdoch, T.  Currently, you probably walk tall at Fox studios but in so many ways you are a co-dependent in an abusive relationship who sticks around cause your husband buys you nice things.  Cause man, what happened to that thing you call a soul, brutha?

When we saw you punk out the bewildered Sean Hannity when he tried to portray the tragedy of Katrina as just some black folks going for a swim while you were standing in a moat full of corpses, some of us figured that might be your last report from Fox News.  Even though you had always spoken to the viewer with a mischievous gleam in your eye, as if you were in on the joke that was your network, this was raw, fed-up emotion viewers saw at home, and it was unclear whether the network would stand for it.

Yet, you came back.  All the way through the ’08 primaries and into the most relentless, vicious attacks a national media outlet has unleashed on a Presidential candidate since the Richmond Enquirer called James Buchanan a “homo.”

But we who can sense the slightest bit of suffering can see the changes, Shep.  The subversive twinkle in your eye has now glossed over.  That dashing grin?  Only on Fridays.  Nobody with your assumed level of decency and integrity could withstand the convenient lies coming out of Hannity’s face every single fucking minute he speaks.  A man who would panel Randall Terry and G. Gordon Liddy to discuss Obama’s relationship with William Ayers.  You had to show up to witness the cross-eyed Steve “This is Huuuuge!” Doocy, his Predator-faced manboy Brian Kilmeade, and that goddamn retarded blonde woman wrap up their 4th morning segment on Jeremiah Wright to then go on and praise Sarah Palin’s watertight brand of Christianity that holds up a pastor who hunts witches in Kenya during Passover as one of its heroes.

And Shephard, I’m not so sure you haven’t been drinking.  Being a drunk my whole adult life I learned how to turn the put-upon Jeckyl into the brutally honest Hyde and now, in recovery, I can spot many of the signs.  I don’t think it was a sober man who made fun of Glenn Beck’s silly studio cushion fort a few months back.  And that time you let one rip on the air?  Live? Though that may have been the juicy fart of a plastered anchorman, I recognized it less as a momentary lapse of biological control and much more clearly as a cry for help.
After all, what better means of communicating a grievance to that narcissistic, knuckle-dragging crew of cavemen with whom you work?

By this point, you’re probably taking a double slug with your Honey Nuts just to get out of bed and face that ghoul, Brit Hume.  Gatorade and vodka during rehearsal.  Another pinch before they go live.  I been there, dawg.  You think it’s sober Chester who’d loudly remind his step-dad he’ll never be his real father during the man’s retirement party?  Not bloody likely.  But that bottle is not gonna give you back your integrity, Shep, not as long as you are hobnobbing with the propaganda clowns at NewsCorp.

And last month, I think most of us saw the beginning of the end.  Stuck between a couple of neocon stooges during a live segment on torture, you couldn’t stand it anymore and I’m told you threw your chair at the audience and told everyone in the studio to go fuck themselves. Or something along those lines. 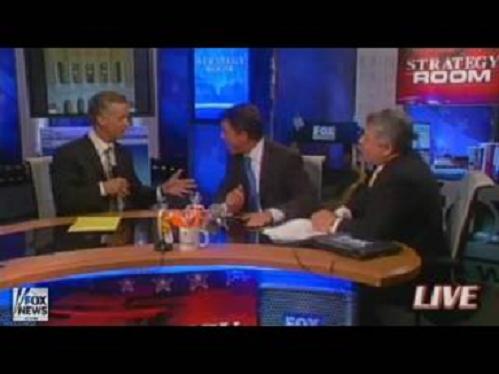 Brother, you are spinning in this shame spiral due to the guilt of accepting a paycheck from that vile network and only a blitzed outburst, in the form of blowing mud at a hapless co-anchor, or a pointed curse word, gives you any sort of release from the internal hell you must be going through.

Or tell CNN to make an offer.  They put you in the driver’s seat of a commentary show…and put that shit up against The Factor.  Sheeeeit!
I could see you whooping both Olbermann’s and O’Reilly’s asses. With Spongebob still whooping all y’all, of course.

Nonetheless, this is an opportunity.  Let that insanity parade march itself right into oblivion.  If you were to find greener pastures, and given your reputation, they WOULD be greener, your old network will eventually go the way of daytime talk shows.  We know you want out of there.  We know you’re one of the good guys, but right now you’re holed up with the bad guys, only we can tell that your Stockholm Syndrome is starting to wear off bit by bit. We here at Ruthless wanted to extend an encouraging hand.  We don’t see ’em change to the side of decency and  virtue too dang much anymore in this crazy world, but we see it just enough to be inspired.  As with Arlen Specter.  David Brooks.  Randy “Macho Man” Savage. And now it is YOUR time, bro.  Because though you may not be parroting all that conservative propaganda those right wing douchebags around you are, as long as you have your wagon hitched to Fox’s dark star, you are enabling wrongdoing.  And you know, they’re still sending old man Nazis up the river for that kind of thing.

Mr. Smith, we beg of you to depart that disgusting purveyor of deception, cynicism, and hate.  You have been walking through the valley of darkness for far too long.   Beset on all sides by the selfishness and tyranny of evil men.  And it IS Foxnews that is evil. And selfish.  And weak.  But you sir, you are the righteous.  You are the protector of truth.  Of justice and humility.  And as we toil through the cold, vengeful black, we call on you to lead us out.  Because you sir, you are the Shepard.

And we’d be honored to be your flock.