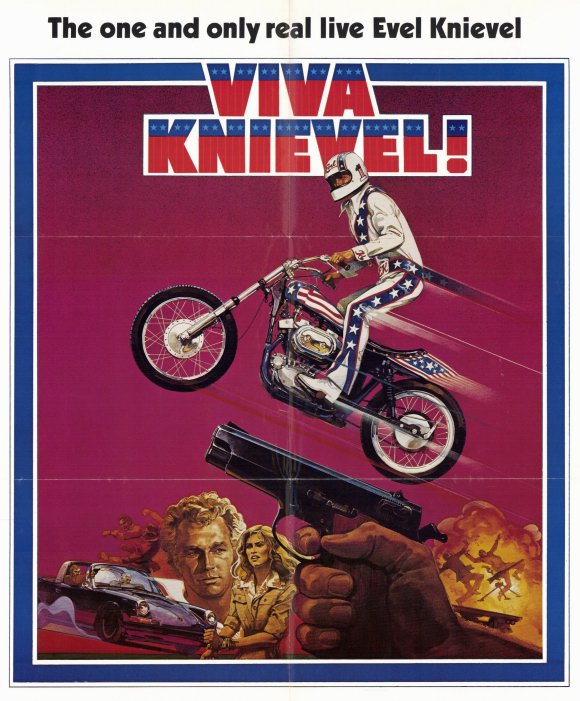 In the same year that Star Wars was shattering box office records and shifting the culture to a new dimension of merchandising, special effects, and unending Mark Hamill mania, an old icon was inhaling the fumes of a once proud career. That man was Evel Knievel. With the infamous Snake River Canyon jump three years behind him, Knievel was dying for a hit; a new enterprise by which to recapture the country with his unparalleled flair for the dramatic, as well as one of the worlds most enviable heads of hair. Thankfully, Hollywood was coked up just enough to throw a few million his way, and what resulted was Viva Knievel!, a film so legendary that it was quickly disowned by everyone within earshot. A film so incompetent, so dreadful, and so uniquely embarrassing that co-star Gene Kelly would sign on for Xanadu as a cleansing ritual. A movie so egregious it would think nothing of asking Leslie Nielsen to play a drug kingpin, or worse, that Frank Gifford be paraded before incredulous eyes wearing the same mustard sport coat and ketchup shirt on three separate occasions. Its the sort of clueless action-adventure with precious little by way of actual motorcycle stunts, but enough out-of-control semi-trucks to satisfy even the most hardened veteran. And without a sense of humor in sight, its just about all we can take when Dabney Coleman shows up as the head doctor of a ritzy Mexican sanitarium.

After all, its damn near impossible to salvage an ounce of credibility when, during the films opening scene, Evel breaks into an orphanage to shower the apple-cheeked children with Evel Knievel toys, one of which is so inspiring it causes a crippled boy to throw away his crutches. At that moment, a lumbering nun appears, roaring, Darn you, Evel! The anger quickly subsides, as the good sister is bribed with chocolate. But how much does our hero really love the children? Consider his reaction to an affectionate hug by the weakest, most vulnerable of the kiddos: Back off, little guy. Excuse me? Id say the tone was aggressive, but Evel rarely wavers from his marble stare, so any intended elbow to the ribs will remain forever unknown. And yet, when the soundtrack kicks in, it promises excitement. And why not? This is the most famous man in the world — a daredevil, a showman, the Gorgeous George of stunt work — and who could resist a tune that refuses to offer any words save Evel and Knievel?

Admittedly, Gene Kellys first appearance forced me to cringe, what with Singin in the Rain and Inherit the Wind already on his resume, but he quickly won me over with his dynamic attire from the Ralph Furley collection. No man should be expected to bear the cross of that much orange in any one picture, but Gene pulled it off with the usual class. As if it had to be said, Gene plays Evels right-hand man; a former stunt man of great renown who now tends to the bikes and makes sure the jumps come off without a hitch. Before we can adjust, Gene is kicking the crap out of Red Buttons, and trying desperately to avoid his 10-year-old kid; a boy whose Barry White inflections betray a much older man, as if the resemblance to the kid from The Omen werent bad enough. But Gene wants no part of him, as he is blamed for killing his beloved wife during childbirth. Its a subplot that goes nowhere, but it does allow us to see a once great dancer and screen talent reduced to phoning in a fistfight with a disco-era madman.

Immediately, it is apparent that no man in this movie will be allowed to button his butterfly-collared shirt above the navel, including Leslie Nielsen. Especially Leslie Nielsen. Showing dramatic chops unequaled until Creepshow, Leslie is the bad guy of the story; a rat fink drug lord who just happens to be the kind of criminal who hatches his evil schemes while eating breakfast poolside. And what a scheme it is! In order to smuggle $3.6 million in cocaine into the United States, Nielsen will lure Knievel to Mexico with the carrot of $500,000 in jumping gigs, all so that his bike can be rigged with an explosive, thereby killing him before a packed house of thrill-seekers. Then, having placed EK into a coffin that will be housed snugly in an exact replica of the stuntmans big rig, the body will be brought back to the States stuffed to the gills with packets of white powder. Its foolproof, I say! If only Nielsen hadnt conspired with a glory-seeking rival to seal the deal. You just had to know that the kid would crack under the pressure, causing him to spill the beans to Knievel, but only right before hed crack him over the skull, grab a handy EK jumpsuit that just happened to be lying around, and attempt that doomed jump himself. Pride always goeth before the fall. No matter; well just throw the phony Knievel into the coffin and take our chances.

One would have thought that the plots unraveling would have constituted the movies conclusion, but it droned on for at least another half-hour. In that span — complete with Genes death and resurrection, a chopper/semi chase scene that all but stopped time, and Knievels hilarious sideswipe of a goat — I could reflect on what I had seen play out before me. There was Gifford, playing himself, screeching uncontrollably about never having been witness to such excitement, even though the bastard played in the goddamn 58 NFL Championship, a.k.a., The Greatest Fucking Game Ever Played. But no, an aging asshole in a star-spangled jumpsuit flying over a trough of flaming Pico de gallo has that beat. To add to the danger, Gifford deadpans, Any mistake will cost him his life. Or that Gene Kelly again, inexplicably locked up in Dabneys booby hatch, where he screams violently and attacks Evel with fists flying as if he alone were the reminder of a career now officially off the rails. Or hell, even the dialogue, where EK spits, That kids your number one fan! Why, hed take on the Supreme Court for you! And then, with a shot, Id flash back to the opening stunt (involving a jump over lions and tigers, some of which, according to Gifford, weigh almost 200 pounds each!) where EK harangues the weary crowd with an anti-drug lecture. You think youll do well, he cries, and for five or ten years you will I will? This is a cautionary tale, Evel? Then comes the kicker: Then youll blow up! Its a terrible thought, though the crowd eats it up.

Evel is seriously hurt during that first jump, and though hospitalized, he appears to have suffered little more than a dirty forehead and mussed hair. But the champ considers retirement, that is until the evil rival teases him with the Mexican offer. As Evel loves tequila (and money), he readily accepts. In addition to Gene and his kid, EK invites Gifford and the crusty female reporter he will later kiss with a decided lack of passion. And what the hell happened to Red Buttons? But this is Mexico, where women throw roses from balconies, and the sweet aroma of Latin love inspires EK to snarl, Big dealTheres always a revolution in South America. After a few kidnappings, crying kids, and overheard conversations, Evel is suddenly dressed as a doctor so he can speak to Gene. Soon, Evel will burst through the hospitals front door on his bike, shoot out the lock on Genes rubber room, and ride away. Pushing forward once again to the final moments, Evel proudly sits atop his metallic steed, driving through bars (to remind us its still Mexico, all the patrons wear sombreros) and across mountainous roads, the last of which has a convenient drop-off, just in time for Nielsens Porsche to shoot into the air, roll a few dozen times, and explode in a fireball. In more ways than one, EK has thrown his hat into the all-too-successful drug war. Evel didnt get that bloat and paunch by sitting on the sidelines, my friend.

If it doesnt make sense in the telling, it makes even less sense as it actually plays, and all told, it just might be the worst film of the period. Why it isnt more revered in bad movie circles is beyond me, and its more in line than ever to be resurrected as a cult classic. Now that Evels dead and buried, its fitting that we reconsider his life and times in a new light. The Evel of Viva Knievel! is hopelessly bereft of all charisma, yet this man captured the imagination of millions for years on end. His jumps, had they been housed by the more global media machine of today, would have been so momentous as to paralyze the culture from considering anything else. Its even possible that he could have ridden his motorcycle straight to the White House. He even hated drugs just enough to have been a modest force for self-righteousness. So what if were the type to be hypnotized by sumbitches who haul ass down long ramps, only to crash through beast and flame, breaking backs and limbs along the way? Just keep them on the field on honor, away from that ever-alluring camera, offering but the siren song of an easy paycheck. He needed to be Lawrence of Arabia, when the best he could hope for was Elvis on wheels.