As someone who has made a living in casinos both as an employee and as a player, I could go on an extended, Comic Book Guy rant about the small inaccuracies in this movie, like how MIT students would not use a count so simple as the one in the film, and how painfully obvious the signals the team uses are (“Ooookay, I’ll just go ahead and make a straight edge sign behind my back for no reason and hold it for several seconds.) Instead, I’ll give a brief low-down on counting and casinos, then complain about some other things.

The film portrays the simple counts used by the MIT kids as difficult in themselves, but they aren’t. These guys are just adding values of 1, 0 or -1 for every card revealed. This is explained, but, for some reason, the film tries to convince us that only math prodigies can master such complex calculations. Like, there’s actually a scene where the cards are coming in slow motion so as to allow us to experience the counting process through the mind of the smartest man in history. For a regular schlub, like you or me, the overwhelming torrent of numbers would come like 15 (the existing count) +1, -1. But if you go to MIT, it feels like 15……..+1…………….-1. The hard thing about counting cards isn’t the math, but being able to remember the number while playing hands, enduring unlucky breaks, talking, wondering if the casino din will be loud enough to drawn out the sound of an impending fart, etc. And there were counting teams before and after the one at MIT. The really impressive people are the ones who figured out the counting and team play strategies the MIT kids used in this film. The MIT angle is just a good hook–kid geniuses take down huge casinos. The other big issue in counting cards is bankroll. The movie wants you to believe that card counting is like taking candy from a baby when, in reality, you only gain a small advantage over the casino. You have to bet pretty big to even make counting worth your while and have to have enough money to withstand huge swings. If the real MIT guys scored millions on 17 trips to Vegas, as in the film, then they just got plain lucky. But obviously, the film is very loosely based on the book which, in turn, is probably loosely based on reality (well known counters, perhaps even more than other gamblers, have a reputation for… exaggeration). For example, it is extraordinarily unlikely that either now, when the movie is set, or in the 1990s, when the book is set, that someone in the employment of a major corporate casino would grab a counter, on video, in front of 100 witnesses, drag him to a secret room and beat him. Counting is legal, unlike kidnapping and assault, and it’s hard to see how the protagonist could fail to land a seven figure settlement. In real life, they just ask you to leave. 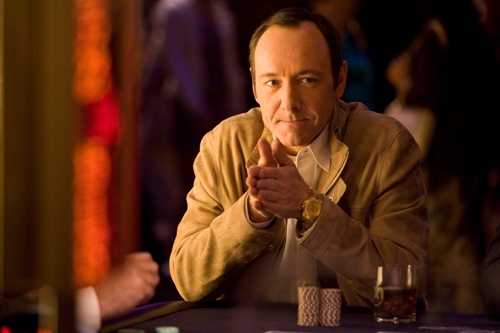 A smaller film about the actual nuances of counting and the real lives of these kids, as opposed to the cut and paste story of nerd–>success–>previously unobtainable tang–>hubris induced collapse–>redemption, could have been interesting, but this is obviously meant as cheap entertainment. And it is pretty entertaining. It’s the gaping plot holes and implausibilities that are hard to ignore. Like, the protagonist seems to feel that the only way to pay for medical school is with a $300,000, up front payment in cash. The student loan option is the elephant in the room, completely unconsidered and unmentioned. It’s like he’s a 15 year old girl with an unexpected pregnancy in a PG-13 comedy standing right in front of a coat hanger and vacuum cleaner. Nobody in the film seems to be aware of the existence of safe deposit boxes or the fact that they can just keep large sums in high denomination chips, rather than great walls of cash hidden in the dorm. Yeah, in the dorm. There is a bit of controversy as the protagonist of the book and most of his cohorts are supposedly Asian, while Asian actors are only given small rolls in the film. This seems like even more of a mistake, given that Jet Li has a better American accent than Brit Jim “‘I’m jus’a middo’ class bloke from tha colonies ‘oo don’ ‘av enough quid ta go’a university” Sturgess, who plays the lead here. Finally, there is the downfall of the treacherous professor and gambling mentor to the MIT kids, Micky (Kevin Spacey). The students he recklessly screws over have more than enough information to have him both fired and put in jail for a good stint, as he clearly exploits his students and foolishly refuses to pay taxes on his perfectly legal winnings. They could probably sue him too, if the IRS didn’t take everything. No genius grasps these facts, as Spacey destroys his prodigy and everyone reacts helplessly. Instead, a trap is set that is not only needlessly elaborate, but would be sniffed out from a mile away by a hydrocephalic panda bear if it were in Spacey’s position. The trap is sprung and the consequences for Spacey are that a casino security guy who has been pursuing him for years, while knowing his full name and place of employment the entire time, finally captures him and… calls the IRS.

As I said, the film is entertaining despite failing in almost every other dimension. Take that with a grain of salt, as I am the kind of person who is delighted by mere radio ads for Vegas. This one hovers between worth renting and worth maybe catching on TV someday. Kate Bosworth is aging horribly.