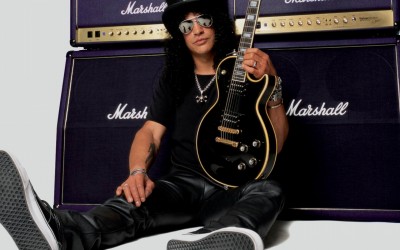 I resented Guns and Roses when they came on the scene. I imagine that, as a dipshit 7th grader, it had something to do with my musically challenged philosophy that they were ripping off equal parts Metallica and my beloved Crue. If you remember, it was only after “Sweet Child O’ Mine” that they rocketed into the stratosphere and at that time I was fully unfamiliar with the rest of the album except for a vague recollection of seeing the “Welcome To The Jungle” video. Since we were Iowan trash without cable I wasn’t exposed to the rest of the album . Thus, given the balladry of “Sweet Child O Mine” and the amount of people I didn’t like showing up to school wearing G N’R tees, I figured them for another hair-farmer, girl-bait band. And yet, Motley Crue were somehow paragons of integrity.

Sometime in 1988 my older brother plucked my head from my asshole and I experienced a few full listens of the greatest rock album of the past 30 years, Appetite For Destruction. For me, like many other kids, it changed my world. It was antagonistic, mean-spirited, looking for a fight with liberal usage of the word “fuck,” and god damn melodic in the face of salty old detractors and critics clinging to their Beatles records denying what was apparent. Out of the cellar of zebra spandex and Z2 double neck guitars with, well, zebra patterns, came a rabid, snarling bunch of psychotics with a record that blew doors off those dusty, near-mint record collections.

What makes Slash’s autobiography interesting is that one is constantly reminded that five dysfunctional, drug-saturated, chemically imbalanced young men were able to lay down those 12 tracks and inarguably change the face of rock and roll. For like, a couple years. Until Nirvana did it all over again, but that’s another biography.

Reading this mashup – while learning that Slash’s real name is Saul for Christ sakes – you find yourself perplexed at how it was to all come together. Seems that all these guys were bouncing around other bands on the Sunset Strip, seemingly directionless and going nowhere fast. Slash actually auditioned for Poison at one time, for the love of God (which turned out to be one of the funniest stories in the book). Mostly there was this incestuous swapping of musicians between bands like London, Hollywood Rose, whatever else Tracii Guns had going on, Slash’s dropout band, which didn’t even have a singer, and like, Jetboy.

Slash was already dabbling in H and Axl, even then, was already a moody prick that couldn’t be counted on and told Slash’s grandma to “fuck off”. You almost have to respect that money didn’t really change Axl. Apparently, he was always fucked. Izzy Stradlin had focus but was picking up his own drug habit and Steven Adler was a gigolo since he was 12 and was without trustworthy skills in the eyes of the other soon-to-be band members. It turns out some of Duff McKagens connections came through at the right time and place more than once to keep this shifty bunch of undesirables from unraveling and going their separate ways before any songs were even written. If you’re having similar problems, check out this review of The Sundance Center rehab in Scottsdale, Arizona.

I’m always fascinated with rapid rises to fame and the rise of this group of already extremely dysfunctional men could be considered one of the most meteoric in music history. It did take a year before Appetite caught on with the public after its release and the band started headlining, but shortly after that – if you can even remember the fall of ’88 – they pretty much ruled the planet. However, what’s most interesting is reading about the events right before they broke big. The band was opening for Queensryche, Ratt (Slash labels Stephen Pearcy a “moron”), Motley Crue (respected by Guns and Roses as incredible partiers), until they finally got a headlining slot with bands they hated, like Faster Pussycat, opening for them. Slash and Izzy were full blown heroin addicts with Slash downing a bottle of Jack or vodka per day. Those posters we all saw were not faked. You know, the ones with Slash crumpled on the ground, top hat and hair hiding his closed eyes with the neck of his guitar holding his head up? He was passed out at the shoots. And Steve Adler with a gigantic clenched teeth grin on his face? He was the bands resident cokehead.

Fame didn’t really seem to change our boy’s habits much either. Slash had two main interests outside of playing guitar; dope and booze. As a matter of fact, and I’ve read about a lot of other junkie musicians, Slash so far is the biggest fiender I’ve ever come across. Not necessarily a junkie I suppose, but Slash was the kind of scrounger who would throw rocks at his dealer’s window at 4 in the morning, ask everyone in a public place if they could score, get his stash, and like a squirrel running off with a nut, scramble to a bathroom to fix immediately without a care that everyone knew what he was doing. At one point he says even his dealers started avoiding him.

One of his best heroin stories comes from a time he was supposed to be detoxing at an Arizona resort but instead was speedballing. He became so paranoid that the once friendly hallucinatory little corner-of-his-eye army men chased him right through the glass of his shower and eventually fully nekkid into the lobby of the hotel where he dodged between some businessman to shield him from the spazz warriors. Oh, and Slash recalls that the little bastards looked like Predator. I suspect this horde of mini-soldiers were cousins of the tiny robots that chased our head groundskeeper Erich around his pad and the little figures that repeatedly did kama sutra positions I used to see in my darkest hours.

We all know we don’t like Axl, right? I mean, for a decade it’s been common headbanger knowledge that he was the monkey in the wrench, the ointment on the cock, and that somehow – though we never really understood – it was his fault that G n’ R disbanded. Well, according to Slash, if only half of what’s written here is true, Axl Rose is the biggest piece of shit in music. If I could unsee his band of fools (your brother must be spinning in his grave, Tommy) I paid $65 to see in 2002 I absolutely would. It would’ve been more appropriate if Roseanne Barr and Margot Kidder were in the band and they called themselves The Bi-polar Bitches because Axl is the poster child of that pathetic disease.

Slash to his credit refuses to blame Rose entirely. He recounts the Use Your Illusion tours in which the singer, with perpetually hurt feelings, would keep the band waiting and go onstage three hours after they were supposed to, causing more than a couple riots, and embarrass the other guys in front of Metallica with lavish theme parties such as, seriously, Roman bathhouses and Mexican fiestas complete with big sombreros. Not to mention the biker shorts. Those fucking biker shorts. My dilemma is that I wonder if I can ever hear a G n’ R song the same way again. I just keep thinking of the little bitch that the screeching singer was all those formative years. Slash is nice enough to blame many of their problems on the addictions that overwhelmed certain band members, even though he contends that at show time, they were all, except for the lobotomized Adler who was no longer with the band, ready to go on. But not Axl Rose, no, because the lead singer of the most dangerous band in the world was as womanly as your fruitcake mother-in-law.