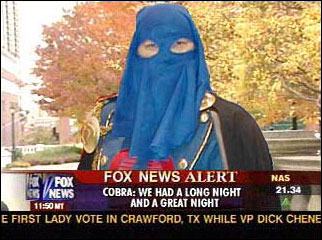 Like many people on the left, or even the center
left, I will wet my pants with impotent rage if Hillary Clinton gets
the Democratic nomination for president. This would be true in any
year, but with the Republicans on the ropes after a disastrous and
historically unpopular administration–with the strongest Republican
candidate being a cross between Jared and Fred Phelps–in a
year when the Dems could probably get the corpse of Eugene Debbs into
office, there is a strong chance they will choose a repellent,
center-right shrew. They might as well run Cobra Commander. No, really.
I follow politics closely and loved GI Joe as a kid, so the obvious
similarities came right away. But the more I googled and learned about
the two leaders, the muddier the distinction between Cobra Commander
and his terribly disfigured face and Hillary Clinton with her Christian
Okoye thighs.

Opportunistic hawk. She was for the war in Iraq
when she thought it would make her look good, paying no regard to the
death and destruction it would create. And don’t give me any nonsense
about bad intelligence. All you needed to know was that Iraq was less
involved with terrorism, or any other type of threat to the US than
almost any other country in the Islamic world. Who gives a fuck if they
had some mobile homes and aluminum tubes, even supposing those things
constituted WMDs? When the going got tough during her war,
Hippobottomous took an ambiguous stance. Now, when doing so is crucial for
the nomination, she has begun talking about bringing the troops home,
just as a glimmer of hope for rebuilding Iraq to some degree seems to
be emerging. As to her roll in the whole debacle, she is casting blame
for failure in Iraq and her own support for the war on anybody
available.

Cowardly hawk. He demands total courage and
selflessness from foot soldiers, has no regard for the risk of his own
men or innocent life and berates the slightest failure. Yet when the
bullets are flying he is never the one to make the ultimate
sacrifice–safely parachuting or leaping away from an exploding
vehicle. As soon as his own ass is threatened, he demands retreat and
then blames others for the failures of his ill conceived campaigns.

She got her real start as a corporate lawyer,
pulling down six figures at the service of such clients as arms dealers,
GE and ALCOA, named one of the “ten most toxic companies in the
country” by The Political Economy Research Institute and Wal-Mart,
named one of the “ten biggest boxes of dicks” by The American Institute
for the Study of Shitbirds. She began her political life as a Nixon
supporter, then built a political career in Arkansas, “The Rickets State.”

He has a close, if contentious relationship with
arms dealer Destro. His mask is manufactured by ALCOA. While not a
Nixon supporter, Cobra Commander was often willing to work with
Serpentor. He built terrorist group with aid of Dreadnaughts.

As mentioned, she was a sleazy corporate lawyer.
She made a buttload of money betting lavender chips on the
futures markets with only one problem, she always guessed right. Made
more money in a real estate scam for which over twenty people where
indicted. Chalked all criticism up to a vast right wing conspiracy
that she would devote herself to fighting.

Cobra Commander started out as a used car
salesman, but built his fortune and revived a small city with a company
called Arbco. When the government ruled that Arbco was an illegal pyramid
scheme he claimed to have been “ground under the wheels” of government
oppression and vowed to fight back.

Hillary Lovejoy spent her early career in the
senate on a holy jihad against curse words, boobies and violent video
games. The idea was that the government would take action to alter
media content, but it wouldn’t count as censorship. Then 9-11 changed
everything. People wore hats on their feet and hamburgers ate people!
So she switched from video games to things like the forth amendment via
shit like the Patriot Act. She had patriot fever! She also has a 33%
rating from the ACLU for ’06-’07.

Cobra Commander is a longstanding proponent of
violence in media, including television, movies and comic books,
especially when that media is directed at children. While a dissident
himself, Cobra Commander takes no lip.

Hillary’s past times include flailing pompoms, as
retards are executed by the state. She’s such a staunch drug warrior
that she supported the Violent Crime Control and Law Enforcement Act of
1994, which included a provision for the execution of drug traffickers.
Yes, the death penalty for pushing dope.

CC also favors the death penalty in grossly
unjust circumstances, such as insubordination. However, he favors soft
sentences for heading international terrorist organizations.

Although the financing of Hillary’s campaign by
pharmaceutical industry is often discussed, it is less well known that
she has received significantly more money from defense contractors than
any other Democrat. Perhaps this is because she says things like I dont
believe that any president should make any blanket statements with
respect to the use or nonuse of nuclear weapons and took the
astonishing measure of opposing George W. Bush’s efforts to terminate multiple arms programs. Drink that in.

Although he got started with the pyramid scheme,
COBRA derives most of it’s funding through arms dealing and fomenting
wars so it can sell to both sides. Of course, the defense companies
funding Hillary would never be involved in anything like that.