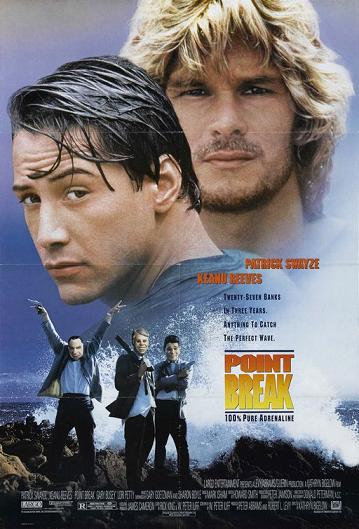 Look, I can’t completely cash in on our running gimmick, as brilliantly revealing as it is, because we’re creeping into the early 90’s here and certain familiar elements of the (gay) male-oriented action movie were being cast aside in favor of more earthy tones, normalized heroes, and possibly even an effort to reflect a more tolerant society at large. Which means less homo-anticipatory frustration in film, as men wore their hair longer, donned earrings, didn’t take steroids, etc. and those once stigmatizing features no longer got them called a “faggot” by a burly guy who secretly wanted them to pound his butthole.

That’s not to say there isn’t some serious male bonding going on in Point Break. Patrick Swayze’s zoom zen beachmonk, Bodhi, takes an increasingly unnatural liking to so-called lawyer Johnny Utah, played perfectly by the impressionable, indecisive Keanu Reeves. Bodhi’s come-ons to Utah range from the admittedly seductive, “Johnny has his own demons, don’t you, Johnny?” to the bizarre, “you’re a pitbull!” But Bodhi doesn’t look particularly heartbroken either when Johnny succumbs to Lori Petty’s gruesome charms after an impromptu night surf. Maybe that’s only because she is nasty-ass Lori Petty and the only hot chick in the movie belonged to Warchild.

Swayze is continually shirtless but unlike with the staples of the 80’s action movement that’s maybe not meant entirely to make you and your brother swoon as this movie drew in a pretty hefty female audience. And that’s not to say it only pulled in fat girls either. I guarantee that James LeGros’ grin made an oily Sly Stallone look positively troglodytic to any chick who saw this movie.

The guys in these surfer tribes portrayed in Point Break definitely have a tight bond but I’m going to hazard a guess that they’re less interested in glistening beefsex than they are some light bromance over spraying cans of beer and the occasional leap from an airplane while holding hands.

10 maybe.
Two for sure during the botched, hilariously unorganized drug raid. Anthony Keidis also shoots his foot off during that part, and an FBI guy gets stabbed in the back but I think those end up being superficial wounds. The real serious deaths occur after Utah is exposed as an agent. A bank security guard gets one, an off-duty cop trying to be a hero takes two to the chest, and young Nathaniel dies in Bodhi’s arms. Then, when Angelo Pappas (Utah’s scruffy partner played by Gary Busey) illegally takes Utah somewhere that isn’t jail after punching his FBI boss in the face, Pappas is shot to death but not before giving Roach a bullet that will later prove fatal. It’s said near the end that Rosie, Bodhi’s henchman, was killed in a knife fight in Baja. And then of course, Bodhi’s tragic demise. 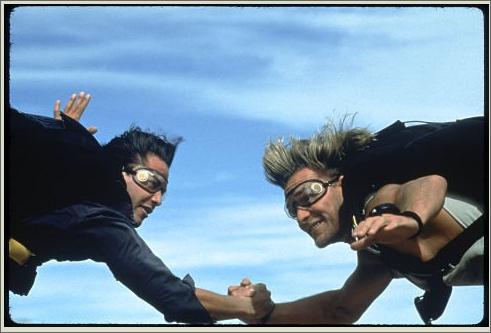 The premise is possibly the most insane in movie history next to maybe Iron Eagle. A tight-knit group of surfers don masks of former U.S. Presidents and rob several banks throughout Southern California while evading the law for no apparent reason. Ok, they don’t go for the vault. Which suggests the banks’ losses aren’t that profound. And more importantly, they don’t initially kill anybody while committing their crimes. And so the situation isn’t all that much more crucial than a few held-up liquor stores.

For some reason, the FBI gets involved, and this is where the viewer starts contemplating yelling at the screen. Pappas and Utah’s plan to teach Utah to surf in an attempt to infiltrate the criminal gang is improbably successful and leads to several inexplicable subplots, one of which has Johnny climbing into a small airplane with a group of bandits who know he’s undercover and he knows they know he’s undercover and they know he knows they know. But they don’t even get to kick him out of the plane at 10,000 feet because he goes ahead and jumps out of it, with a dubious parachute on his back that one of the criminals admitted to Johnny that he packed.

Also, undercover agent Utah just leaves his wallet lying around where anyone can find it, and of course just flipping over the fold reveals his ID with the words “F.B.I” written in big letters. In one early scene Pappas, a veteran Federal Agent, just gives up on dealing with bank-robbing methods that have been foiled throughout law enforcement history at one time or another and dismisses the Ex Presidents as “ghosts”. Well, they must be. Either that, or surfers.

Aside from the entire plot though, the movie is fucking radical. How talented director Kathryn Bigelow managed to stay on and shoot all those incredible action scenes around such a mind numbing plot is anyone’s guess but in doing so, she nearly transformed Battlefield Earth into fucking Die Hard. Make no mistake, this is a fun movie and highly re-watchable even today.

Nobody really talks shit after someone dies, but one that would have been awesome if it’d been said pre-murder is when Roach says to Johnny, “Johnny, you’re about to jump out of a perfectly good airplane – how do you feel about that?” right before Johnny leaped out of it, but for some reason they didn’t sabotage his chute, even though he stood as the biggest threat to their lives and it was the perfect opportunity to get away with it.

Previous mercy for him didn’t stop Johnny from digging his boot in Roach’s wound later though after Roach complained about dying. “You’re cold because all of the blood is running out of your body, Roach. You’re gonna be dead soon. I hope it was worth it.” Oh snap! What a dick.

Actually, there’s some pretty awesome political content. At the end of Point Break, Johnny Utah throws his badge in the ocean because he realizes that working for the FBI is fascist and even though killing people in bank robberies is wrong too one can obtain an existential contentment in traveling around the world surfing every day. As Bodhi once told his crew, they are fighting against, “a system that kills the human spirit.” They’re standing up showing the suckers, “inching their way down the freeway in their metal coffins,” that the human spirit still exists.

Is There a Stupid Chief?

Well, he’s not really stupid but Ben Harp, Pappas and Utah’s FBI boss, is an asshole. And he’s not open-minded at all. I’m guessing Harp shot down all of Pappas’ theories. That the Ex-Presidents are ghosts. That they’re surfers. A bowling team. A circus troupe.

Despite the story, this is a movie that takes it’s deaths fairly seriously. Bodhi’s is sort of novelty though because when Johnny finally catches up to him a year after everything went bad and people died, at Bell’s Beach in Australia, where Bodhi’s whole life was leading up to the perfect wave, they have a short fight on the beach but then Johnny lets Bodhi go out in the surf before his would-be arrest. Johnny knows Bodhi isn’t coming back, that he’s sacrificing himself to the sea after nailing like an 80 foot wave. The fucked up thing though and what makes the scene completely anti-climatic is that Bodhi doesn’t even stay on his surfboard for more than a couple moments and appears to just failflop into the sea. I expected they’d show him tearing shit up for at least 15 seconds but he eats it immediately.

How Did This Movie Make You Feel?

Terrible. I first saw Point Break when I was living in Virginia Beach the summer of ’93. I was obviously younger, I had sun-baked, flowing curls, a fearless disposition regarding soaring my bike off ramps, bungee jumping, stage diving, or you know, going to the beach.

Now my knees wobble on a 12 foot ladder and I’m afraid to touch a spider. Watching this film from my couch coffin, my human spirit diminishing in reverse proportion to an expanding waistline, I felt fucking terrible!