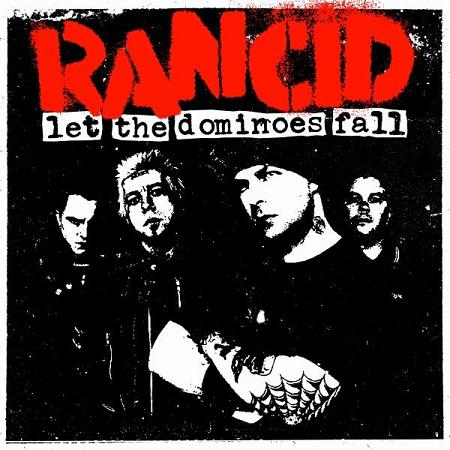 It’s getting hard to trust aging punk bands’ output after so many disappointments in the past couple years. Pennywise, Poison Idea, Bad Religion – there comes that point where a loyal fan must accept that his heroes have run out of new ideas. When the old guys in Motley Crue are releasing more exciting material than NOFX you start to contemplate if punk has a creative ceiling.

I was reticent picking up Rancid’s Let The Dominoes Fall. Initially passing it up new for $9.99 at Best Buy, I then found myself facing a classic used CD store Catch-22 when I saw such a recent release on the shelf at the secondhand price of $7.99, a price that seems like a no-brainer for the latest from such a legendary band until you think about how someone in town sacrificed about $5.00 in possible disgust. I considered listening to it on Youtube before shelling out the money but the store is all the way across town and I figured I owed it to the band if only for the timeless …And Out Come The Wolves and my five finger discount of their previous album from the internet.

Rancid’s newest turns out to be much less of a letdown than some of the aforementioned bands’ last releases. You’re not getting a reinvention of the wheel here like with Wolves and coming six years after the all-over-the-map Indestructible, maybe fans were hoping for a little more predictability. With Indestructible, band founders Tim Armstrong and Lars Frederiksen were immersed in so called “side” projects to the point that it was expected to feel like a second-thought album, which does not seem to be the case on this release.

To this particular critic, now in his mid-30’s and listening to like six new records a year, LTDF is a helluva solid comeback. Blasting off with another charged opener, and a singalong tribute to their stomping grounds, “East Bay Night,” a hopeful but cautious smile crept across my stupid face. Four of the first five songs in fact are pretty infectious and though it doesn’t seem as classic as Rancid’s past material, part of that could be due to my sorry lack of knowledge about new music.

Not every song gets to be an anthem though, except if it was on AOCTW, and therefore we put up with some of Rancid’s now trademark mid-tempo filler come songs numero 6 and 7. Perhaps being lulled into apathy by those two then, I’m now doubly excited about song 8 and what would have to be the record’s next single, “New Orleans.” A heartbreaking love letter to an unjustly scorned American city, this is a folk song on par with something by the likes of Bob Dylan or John Fogerty, just with reved up guitars and some flying spittle. The band doesn’t go out of its way to bust the government’s chops on their sinful response to that tragedy, and like “Rwanda” from 2000’s self titled release, just keeps it a show of support to the town and its people and that’s what makes the song so great. That and a remarkably uplifting melody. And is there anyone else out there who can rock a slide guitar like Tim Armstrong? “New Orleans,” is Rancid’s best song since the mid-90’s. And that’s saying a lot.

The populist screeds “Civilian Ways,” and “Lulu,” recount more working class song stories, a band trademark and, “You Want It, You Got It,” lights up the back side of the album between a couple weak moments. One issue I had– Armstrong has one of the most distinct voices in music and Frederiksen is a welcome growler but to me bassist Matt Freeman sounds like he’s trying to force out a bunch of vocals while running out of breath and is reminiscent of that guy from Dropkick Murphys who they let sing sometimes too and I thought to myself “why would Rancid invite Dropkick’s underwhelming backup singer to sing on this?” Then after a couple listens I realized it was Freeman, who they let touch the ball out of charity a couple times in the past. Seems pointless and why toy with such a successful formula but hey, why carp? I think it’s safe to say punk doesn’t boast the most rangeful of vocalists. They also have a new drummer. I liked that other guy but I can’t say I’m able to tell the difference.

Nineteen decent songs with a couple killers close out with, “The Highway,” a little acoustic gem that becomes disarmingly yearning as it goes along and has a distant last song ever quality to it. Which after listening to Let The Dominoes Fall, I sincerely hope is not the case.