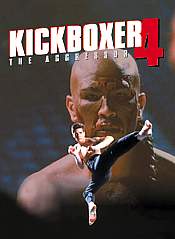 Jewish beefcake is almost as sexy as Belgian beefcake.

This is the queen of the series and, considering the constant display of the oiled, male form in Kickboxers 1-3, that says a lot.  One woman shows her tits and has sex with our hero’s sidekick.  In accordance with the laws of 80’s action, she is killed for poisoning his cock with her vile stank.    The plot does revolve around Sasha Mitchell saving his wife, who has been kidnapped by bad kickboxers.  However, she is unattractive and seen only in the beginning, when she is raped by the head bad guy, Tong Po, and then at the end as a hostage/horrible, ugly burden.  Mitchell never deigns to hug or kiss her.  The real action begins when Sasha and his equally buff sidekick are tied up together, chests oiled and glistening. We meet Tong Po, we can see that he waxes his eye brows, has had numerous plastic surgeries and wears make up.  Not movie make up, girl make up.  Sasha  is asked by a woman just how hard he is.  He rebuffs her by saying, “hard enough,” in a reply that can only be meant to establish that he is too much man for a mere woman.    Also, there is a bar fight in which Sasha Mitchell uses two pool cues to grope a man’s groin and, given Mitchell’s poker faced intensity in the scene, we can tell he really enjoys vice-gripping those balls. The climax occurs among picnic tables, where hissing, kneeing, kicking and bludgeoning all take place in the sun so that our hero’s and villain’s muscles glisten, ensuring that we all win.   In other words, I was left with a swollen colon and a broken pool cue.

“Darcy Is a beautiful woman!”  Right before Tong Po stabs a hooker, spilling her guts as she’s tied up next to our hero and his sidekick. This sequence is funny, not so much because of the line,  but because Tong Po is playing a mandolin when he disembowels her.

13.  Once again there is a lot of gray area because there are many fight sequences that could easily kill someone in real life. A guy gets his head slammed into a brick, for example but fractured skull, schmactured schmull… there were 13 confirmed kills.

Tong Po’s main henchman (Played by the guy that killed Jason in Friday The 13th Part 6: Jason Lives) has a gun to the head of Mitchell’s wife.  Mitchell grabs a really dull looking knife that happens to be sitting by a punchbowl.  Before the villain can  react, he gets the knife to the head.   I love it when people get stabbed in the head.

How Bad Is It Really:

This is easily the best of the Kickboxer sequels.  This fucker is watchable (I’ve seen it like 14 times, which is about 11 times less than I’ve seen K1). There is a great bar fight in which Mitchell throws bikers through windows, pool tables, phone booths, picnic tables (there’s kind of a picnic table motif) and stools.  During this scene, a man is thrown through a window, then hit by a van and propelled back into the bar through another window. There was a guy who would slam the head of his opponent into the ground over and over again.   There were tons of necks being broken and, in one memorable scene, Sasha Mitchell actually beats up a guy with a pool skimmer.   So this is better than the previous two Kickboxers and better than most  martial arts flicks in general.  Of course, it is still  terrible.   I mean, whoever did Tong Po’s girlish makeup should have their hands chopped off.  And how did Sasha Mitchell’s character become a DEA agent after being a kickboxing champion in 2 and 3?  And why on earth does Mitchell go undercover among bad guys who already know who he is, disguised only by a pair of sunglasses?   I wasn’t surprised to see that the guy that directed this film also directed the equally surrealistically crappy Cyborg. Thankfully, they know where their bread (and ours) is buttered and any distractions can be forgiven in exchange for the numerous homo-erotically charged fight scenes.

Mitchell is in prison for doing his job too well, having been set up by his enemy: The System. The System uses Sasha Mitchell’s kickboxing skills to try and take down a drug lord, because the drug lord is also a deadly kickboxer.  He goes too far for the liberal System, however, and they shut him down, which somehow leads to Mitchell’s wife’s abduction.  Only after Tong Po kills a bunch of  DEA agents does The System realize it needs an unfettered hard man to take down a criminal hard man.  Politics and rules are worthless to the bad guys, so the hero shouldn’t have to abide them either.  Finally, when you show criminals mercy, as Mitchell did to Tong Po in Kickboxer 2,  it will come back to bite you in the ass approximately two movies later.

A pair of sunglasses is an adequate disguise, so long as you have a pool skimmer on hand in case things go south.