It isnt easy being Ruthless. The Press Officer for the Homeless World Cup confirmed my press accreditation minutes after asking me So, what exactly is that? Clearly, the Ruthless Corporation has yet to establish itself as a media outlet on par with more reputable organisations, like Al-Jazeera.

A quick summary of the site that neglected to mention its recurring motifs of Black Metal, hardcore pornography and a large wooden cock was enough to convince them that I was suitably harmless and so the road was paved for me to pick up my press pass the following morning, then stroll towards City Hall Square for two days of football and sunshine.

The day began with a major crisis: to my horror, the press centre boasted no food or, more importantly, beverage stand whatsoever. I was forced to assume that, in a slightly misguided attempt at striking up a bit of empathy with the players, I was expected to scour the city’s trash bins for both instead. Inexcusably, my weekend of homelessness had begun on a sour note. I had become a credit card-carrying bum.

Another faux pas on the part of the organising body was the decision to set up the two pitches in the middle of what appeared to be a refuge for a gang of homeless locals. That said, they endured the commotion with the admirable stoicism that comes from being passed out, blind-drunk at 1 oclock in the afternoon.

Tempted as I was to follow their example, professionalism prevailed and I headed to Pitch 1 to watch the games commence. Friday was quarterfinal day, but due to the limp-wristed liberalism of the organisers, all the teams were still represented, as there were 6 trophies to play for: the winner’s trophy and 5 Mickey Mouse consolation prizes. Denmark were thankfully gunning for the real thing and Friday’s climax was to be their quarter final against Nigeria. Three hours prior to that game I had a little chat with two of the Denmark players kicking back in the still near-empty stands:

As the whole team slowly gathered in the corner, I observed as the pre-game preparations consisted of chain-smoking and talking on mobile phones. Just like the Premier League, probably. One player spent roughly 15 minutes on the phone warning an acquaintance not to bring his ex to the game later on, as he would fuck up and leave if that cunt as much as shows her face down here. Clearly not the sort of lad who’d let his girlfriend give head to a bouncer called Pancake without severe retribution  very commendable and very unlike the Premier League, in that respect.

The first game I watched was USA vs. Argentina. It ended 6-4 and proved that Team America does its best work on the Sawkher pitch when its women, homeless and no David Beckham are involved.

With unpredictability the only certainty here, this was a chance to shine for all the nations otherwise condemned to eternal footballing mediocrity. Except England, obviously.

America fielded a team that didn’t exactly support my perception of the nation as an ethnic melting pot:

Could it be that something’s rotten in the old Union? Be that as it may, they won themselves a nice Mickey Mouse trophy for the mantelpiece back in Ye Olde Shelter  and this was all achieved with the inexplicable omission of Freddy Adu.

An equally fair-skinned team was Burundi, who had gone through some trouble obtaining their visas prior to the tournament. As it turned out, everyone was pleased they made it, for they took it upon themselves to perform the ancient ritual of disposing of England in the quarters. I suppose a penalty shootout would have been too much to ask for, but we gladly settled for an old-fashioned 12-6 thumping and the knowledge that back in Blighty the fans were probably attributing it to a lack of balance in central midfield.

By the time of the Denmark vs. Nigeria game rolled around I was sadly still sober, but the stands were packed and the atmosphere was surprisingly great. The Danes were on the winning end of another 6-4 scoreline. The hard-fought contest was marred by some dubious refereeing resulting in an excellent post-match brawl, which put things back on an even keel in terms of entertainment. Sparked by a couple of Nigerians having a go at the referee, the home nation looked on with the reluctant knowledge of how far attacking the ref will get you in football.

The win, incidentally, didn’t get Denmark any further than the semis, where they took a deserved 15-1 hammering at the hands of mighty Poland. No small feat in a game lasting all of 14 minutes.

As the last match of the day ended, I left the city centre to take shelter at a friend’s house in fashionable northern Copenhagen, a continuation of my plight as a Business Class homeless person.

The Homeless World Cups final day gave the opportunity to acquaint myself with some of the strong nations of world football who hadn’t performed well at this venue. Apart from the ludicrous six finals, the competition had a stab at mimicking the real World Cup by playing out a string of variations on the meaningless tussle for 3rd and 4th place. Among these fixtures was France vs. Brazil.

Puncturing the at-times reasonable misconception that everyone in Brazil is better at football than everyone else, their downfall here was due to an apparently female striker who did well to mask her Adams apple with a 5 oclock shadow and a lot of on-the-ball trickery, step-overs and diving that got them nowhere, as this competition proved to be more about quick passing, positioning and sweeping opponents out of the way with the blind motivational fury only a breakfast of Special Brew and chain smoking cigarette ends can bring out of a sporting competitor.

As for France, it was no surprise to those of us who follow the Euro 2008 qualifiers that they ended up playing second fiddle to Scotland.

The final of the main competition was like football coming home… to 1891 or thereabouts, before South America and swarthy Europeans destroyed the beautiful game with a lethal injection of skill, flair, tactics and other gratuitous nonsense. I imagine the first game of footy ever played may have looked something like the bizarre spectacle I witnessed: for all the finalists cared, the ball may as well have been a pig’s bladder or a Rubik’s cube. Scotland ran out 9-3 winners over Poland in a game decided by quantum mechanics (90%), the direction of the wind (7%) and the players’ intentions and abilities (3%).

The Poles naturally had an army of immigrant plumbers, carpenters and fascists cheering them on, while the Scots thankfully spared us the sound of bagpipes and people screaming in horror at the sight of lifted kilts. I hung around long enough to see Crown Prance Frederik of Denmark present the trophy to the Scottish captain, who looked a bit like Chelsea mercenary  sorry, vice-captain  Fat Frank, circa 2015, before I headed off to the nearest pub to finally do a bit of work on my own beer gut. 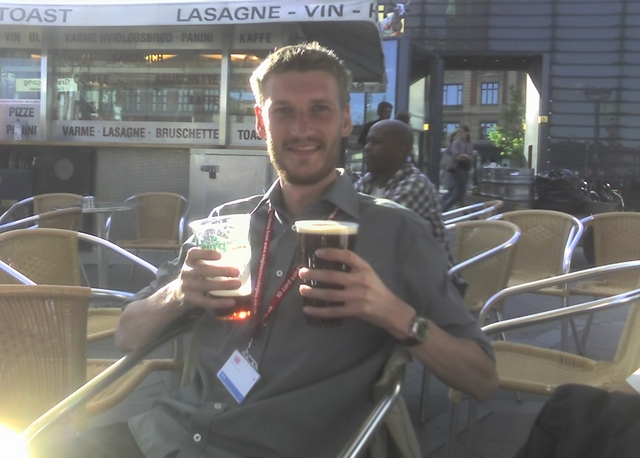 Having been put off poverty by the quality of football on display, I spent Sunday bathing and shaving before I abandoned my nations depraved capital and hopped on a train bound for home, the lesser-known city of Aarhus. As I unlocked my front door, I looked at my flat with fresh eyes, reflecting that a home is nothing to be taken for granted or scoffed at  also, who’s to say you can’t be passed out drunk at lunchtime under a roof, too?