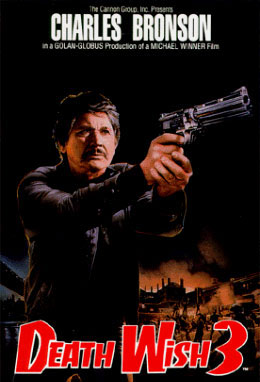 “Muggers who prey on this victim end up praying for their lives!”

Paul (Charles Bronson) sends away for a gun he calls “Wilde” (as in Brandon de, not Oscar) which is long, black, and has the power to coat giggly Hispanics in their own blood. There is also a close-up of Paul doing push-ups, which serves no other purpose than to demonstrate that Bronson looks pretty damn good in a sweatshirt. True, Paul makes love to an owlish female public defender, but homoeroticism has a last laugh as she is murdered within fifteen minutes of coitus. Paul also goes on a ten-minute murder rampage with the police chief who first arrested him after he arrived in town. As the two massacre assorted thugs, punks, and black men (one is a dead ringer for H.R., the lead singer of Bad Brains), they give each other knowing glances and come-hither looks. Moreover, each saves the other’s life, which demonstrates that so long as men bond, there will be peace in the land. Every time Paul tries to land pussy, people die.

I lost track, but at least 578 people die during the course of this film, the majority in the final twenty minutes. We get to see all types of death — stabbings, gunshots to every possible body part, being burned alive, falling from rooftops, etc. No expense was spared and it is my belief that there is no bloodier movie in motion picture history, and I’m including every other film discussed on this website.

Not bad at all [Ed Note: See Matt’s full review]. In fact, it is downright hilarious. I have to believe that the director intended his tongue to be firmly in cheek, although there are enough scenes that approach social commentary (one has an obviously liberal cop taking away a defenseless Jew’s firearm while the neighborhood is literally burning down) to allow for a serious approach. I have yet to read a defense of this film that isn’t based on guilt or sarcasm, so who knows. Still, because the film is lacking any real structure (only serving to satisfy bloodthirsty viewers who enjoy watching people die), it isn’t art by any means. Still, how bad can it be when the cast includes an honest-to-goodness Oscar Winner (Martin Balsam) and future Star Trek: The Next Generation star Marina Sirtis? And did I mention Bill & Ted alum Alex Winter?

Interestingly enough, Bronson doesn’t utter one word after committing hundreds of murders. He is the most efficient, heartless killing machine I have ever seen. The best line in the film, however, comes from the top bad guy (played by Chuck Cunningham from the early Happy Days episodes) as he leaves jail after kicking Bronson’s ass: “Tell you what, I’m gonna kill a little old lady just for you. Catch it on the six o’clock news.”

As with all films produced by the team of Golan-Globus, there are assorted right-wing themes running throughout — inept police departments, harmful gun control laws, impotent government agencies, silly liberal idealism (typified by loony lawyers who demand protection for civil liberties and the rights of criminals). Murderers and rapists are let out of jail by feminized judges, which requires hyper-masculine action by Ayn Rand types who believe the individual, preferably with muscles and/or a big-ass gun, to pick up where the candy-assed pinko-state left off.

A man (or is it a woman?) who looks strangely like Margaret Thatcher, runs screaming from a home immediately after Molotov cocktails have been thrown through the window. Needless to say, she/he is on fire and the whole thing is terribly, terribly funny. A close second is a man pushed out of a window by a screaming woman armed only with a broom.

Only when blood flows in the streets will the violence stop.