THE 9/12/09 TAXPAYER MARCH ON WASHINGTON 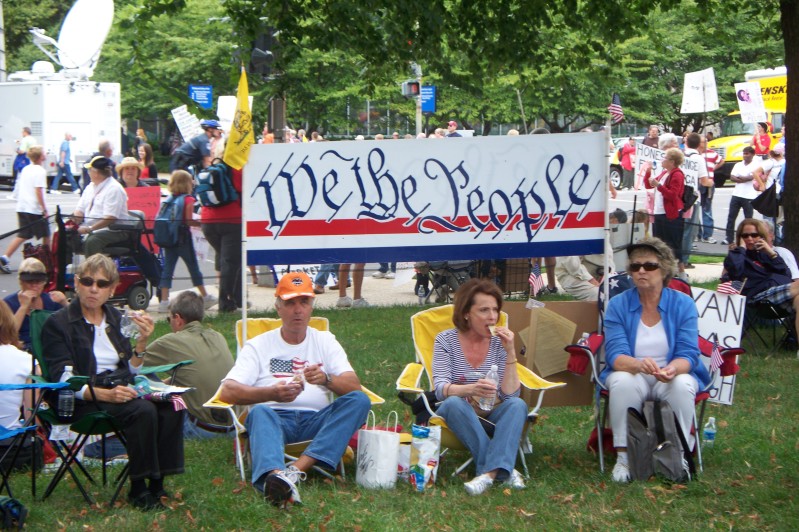 TAGLINE:
When the Communists and Socialists invade, they are our only line of defense. WOLVERINES!!!

ENTIRE STORY IN FEWER WORDS THAN ARE IN THIS SENTENCE:
White people cant really march either.

HOMOEROTICISM:
Grand Old Party, indeed! One of the chief organizers and speakers of the event was none other than Dick Armey. Members of this movement call their events “tea parties,” and they all gathered in the tip of the shadow of the most phallic symbol ever erected to chant, sing, and focus on one mans giant, black cock. Even Gay Pride parades cant hold a candle to the sexual frustrations of these teabaggers who have flung themselves from the closet of patriotic male-love into the open for the entire world to see. They love America, Ronald Reagan, and Glen Beck goddammit! And they dont care who knows it! But even sexy bald eagles, dead presidents, and weepy commentators took a back seat to the real star of the show and subject of fawning adulation, tumescent cocks, and welcoming open mouths  their very own Joe Wilson, whos outburst of, You lie! has become this movements, You complete me.

CORPSE COUNT:
There were no actual physical deaths, although I did spot several old, winded white men and heard ambulances rushing by, so hope springs eternal. However, one could not turn around without being confronted with the corpses of Reagan, Adams, Jefferson, and Schiavo. No, the only true death to be witnessed was that of Republican ideology. For all the rhetorical bluster that this march on Washington signified a middle class uprising surfing a new wave of Conservativism and populist anger, it felt more like the last gasps, gurgles, and moans of a terminally ill people raging against the dying of the Right.

It would be easy to dismiss these people and their collection of half-baked prejudices and Reagan-worship masquerading as ideology as ignorant and out of touch. Of course they are. Their complaints represented the best/worst of a long-since debunked mythology of yesteryear. Their heroes are either long dead or morally bankrupt and disgraced by their inability to abide by the Puritanical code of conduct expected by their supporters. Instead, they are left to worship petulant Congressional brats and a former beauty queen with the toxic appeal of a fart on a long, crowded elevator ride.

But instead of writing them off, noting the time of death on the certificate, and moving the fuck on, Democrats, and even Obama himself, continue to offer CPR and administer shocks in a misguided effort at bipartisanship. JUST LET THEM FUCKING DIE ALREADY! They have already said that they don’t want the government involved in their end of life decisions, so just walk away. For the love of all that is good and righteous in this world, do not fucking resuscitate.

HOW BAD WAS IT REALLY?
As political theater, it was highly successful. There were laughs aplenty as participants mugged and posed for the cameras carrying signs with handwritten instances of sharp and insightful political wit. As a political movement, it was an abject failure. It was an odd intellectual (not really) cornucopia of Reagan conservatives, pro-lifers, 9-11 Truthers, Ron Paul supporters, anti-corporate free marketers (yeah, really), and Lyndon LaRouche douches. Sure, Glen Beck and Dick Armey were able to mobilize thousands of disaffected Fox News viewers in an amazing display of Right-wing diversity, with participants ranging from middle-aged and white to old and white, with a smattering of twenty- and thirtysomething whites who forced their 2.5 white children to march for causes they cant comprehend while wearing political shirts they probably cant even read. Having your kids listen to a message from the President telling them to stay in school is considered an unrepentant and insidious kind of indoctrination, but decorating your child in the latest Hate Speech apparel is apparently A-OK.

Crowd estimates range from 12,000 to hundreds of thousands. It may be difficult to accurately gauge the true number as most participants marched down to the Congressional grounds, saw that there were no seats or shade, realized they would have to stand and listen to speeches, said Fuck it, and decided to head to the nearest bar to stuff their faces and watch college football. These peoples commitment to their cause can be measured by the equal number of yellow Dont Tread on Me flags leaving the rally as those that continued to fly on the Capitol grounds.

The Teabaggers appear to have only three solutions to their multitude of complaints  1) Impeach someone; 2) Stop government spending; and 3) Accept Jesus Christ as your personal savior. Sure, they have no problem with going to war under false pretenses, deregulating a financial market to the point of outright criminality, or having an unelected and unaccountable private insurance company making medical decisions, but the mere suggestion of helping the poor or implementing government regulation in any way, shape, or form will flip them out enough to waddle on Washington. And where is their indignant rage at the unchecked, deficit ballooning, multi-trillion dollar giveaway that has been Iraq and Afghanistan? The same people who bristle at the idea of increasing the minimum wage by $.25 or extending unemployment benefits by an extra week consider the unchecked, deficit-ballooning, multi-trillion dollar giveaway that has been Iraq and Afghanistan as perfectly acceptable. But suggest that government, as the major consumer and purchaser of health care, should be able to negotiate lower prices and suddenly youre a traitor and a Communist who should be strangled with a copy the Constitution by the resurrected corpse of John Adams, which, quite frankly, isnt very Christ-like of them.

POST-MORTEM ONE-LINER:
As I was walking back from the rally, a lone Teabagger marched down the sidewalk toward the rally, shouting, Thank you, Patriots. You are relieved. The second wave is here. Thats right…a one-man relief team. This is what we on the Left are afraid of? Really?

The H1N1 flu is just a New World Order media controlled and contrived smoke screen to frighten people into getting the vaccine. The flu vaccines are actually a secret government plot to experiment on an unwitting public because they contain CIA developed mind control substances aimed at turning our children into subservient lackeys of big government spending by weakening their immune system and making them more susceptible to socialism. And, no, Im not making this up. A woman and her kid were actually handing this out on the Metro to a mind-boggling collection of nodding heads and I knew it looks.

Yosemite Sam is an evangelical Christian. I shit you not. 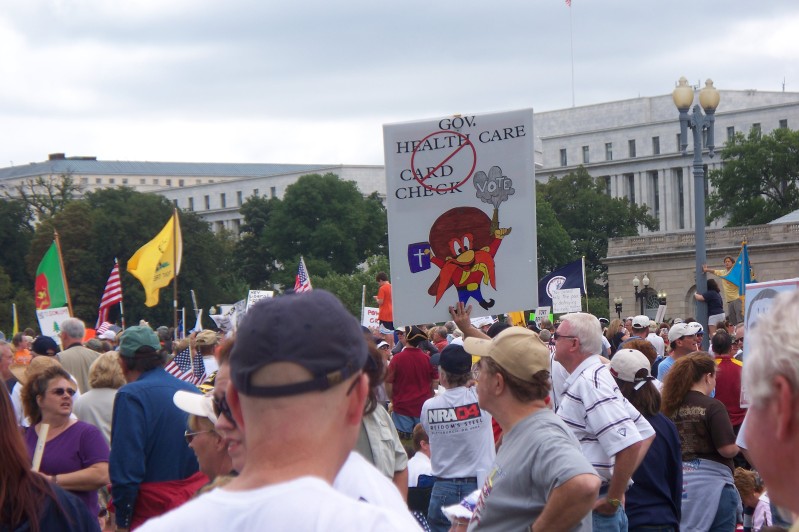 WHAT YOU LEARNED:
Conservatives of this ilk are our Native American population circa the late 1800s, pushed to ever-shrinking fringes of a land they used to call their own, completely surrounded and outnumbered by the Calvary of equal rights. Their way of life is being slowly crushed and replaced by the new Manifest Destiny of social liberalism. One can only hope that as history progresses, it will also repeat itself, resulting in Conservatives being forcefully herded into their own semi-autonomous reservations scattered throughout the Bible Belt, filled with evangelical churches instead of casinos. And heavily taxed to subsidize gay marriage and provide free abortions on-demand. That is, if Democrats dont fuck it up.