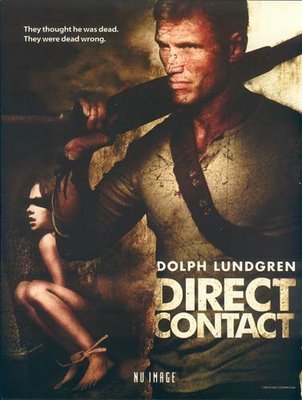 They thought he was dead. They were dead wrong.

Dolph Lundgren is just shy of 52-years-old, and Ill be damned if he isnt shirtless within the first five minutes. Hes ripped, hes cut, and despite a minor sag or two, he still looks like his torso is slathered in saran-wrap. Hes an undeniable slab of eye candy, even if hes now more Gordon Ramsey than Ivan Drago. Hes a mans man, but at this late date, hes still bored by strip clubs, and seems only mildly amused whenever hes surrounded by topless tarts. Even after kidnapping a hot oil heiress, it remains about the money – $200,000 to be exact. Right away, he stuffs her in the trunk of his car to avoid looking at her. And hell, doesnt anyone sodomize kidnapping victims anymore? The gay vibe is blasted away when the pair, now on the run, fuck in some farm house, but Ill swear on my grave that he was raped. Shes the one who pushed him to the ground, after all. And during their brief make-out session, shes all squeals and chirps, while hes indistinguishable from balsa wood. His is the hard-on of the cash nexus, not perky tits and pouting lips. Dolph is also kicked squarely in the nuts to absolutely no effect. Im not sure how thats gay per se, but its a little odd.

A respectable 48 are sent to their graves, most of whom are faceless, nameless, soulless Russians. Thankfully, the filmmaker decided that because he only had about 15 minutes of story, hed be forced to put each and every death in slo-mo to ensure categorization as a feature film. As densely packed as the violence is, the number should have been twice that, as the Russian army has apparently decided to hire the least proficient snipers on the globe. Even worse, Lundgren and his female companion are chased down a narrow tunnel by a fucking tank, for chrissakes, and nothing – not bullet, not land mine, not grenade, nor heat-seeking missile – so much as singes a patch of forearm hair.

Lets begin with the tagline. At no point does anyone think Dolph is dead. Not the Russians, not the CIA, and not even the guy trying to kill him. Even the bad guy funding the whole operation says that Dolph has more guts than the entire army being sent to kill him. Next up, the Russian mobsters and generals are inexplicably dubbed half the time for no apparent reason. Dubbing usually clears up forked tongues and the like, but here, the added voices are impossible to understand in any language. The musical score is also an abomination, providing the usual heavy-handed cues for who is good and evil, and during an opening fight scene, its pace is in direct opposition to excitement. Its moody and slow, as if Dolph were reading Tolstoy by a fire rather than sticking forks in eyeballs, or kicking more groins in a single minute than any action hero in history.

The plot is remarkably thin, even for a straight-to-video action piece, but its made worse by Gina May, heretofore the worst actress ever to stand opposite someone I had assumed to be the worst actor. Her stilted delivery, furrowed brow, and dopey grin about forced my hand, but she eventually won my heart by killing a few Russians herself by the final scene. See, she stands to inherit a fortune from her late fathers oil company, only some evil dude channeling Robert Wagner wants it for himself. He has Lundgren kidnap her from a slimy Russian in order to secure her signature on a transfer of ownership certificate he just happens to carry around with him. There are betrayals, hidden motives, and double-crosses, but all occur right before our eyes, leaving no chance for the third act talking killer.

Additionally, Dolph invades and destroys an entire military base all on his own, though its not hard when the dippy Russians conveniently leave dozens of barrels helpfully labeled Explosives right outside key strategic positions. Theres also a lengthy chase scene through the streets of some city in Belarus, I think, that might be the first to involve a motorcycle and a tank. Oddly, as they blast away what remains of the city, no one in the streets seems fazed by the destruction, continuing to read papers and order lunch as runaway jeeps fly through windows and atomic-level blasts cut away entire blocks. And did Dolph have to walk away unscathed from a gas station explosion that just happened to ignite mere yards from his beaming face? And when did he start talking like Kris Kristofferson?

None of any note, though bad dialogue thankfully won out in the end. The bad guy (not him, the other guy), says to his operative, What if this guy goes AOL and tried to cross the border with her? I listened to it three times, and yes, AOL it remains. Lundgren, alas, is reduced to spitting, Look out! and Get down! half the time, though he was given a chance to mutter Keep quiet! near the end. Fortunately, hes given the films final line: God Bless America. Indeed, Mr. Lundgren. The best line, however, is a subtitle, screamed by a Russian general as hes executing civilians for no reason. Search for the Americanskis, he cries, which is twice as funny in the original Russian, I assure you. Then, near the end, as Dolph and the chick are racing towards the American embassy in a flaming tank, an American soldier roars, Terrorist attack! Take your positions! All should hope such brave boys are guarding our liberty as we speak.

Pretty spare for a film about, by, and for Russians. Still, Russians remain evil incarnate, and not a one of them shaves, bathes, or stops drinking. And so the Cold War marches on. There was some loose talk about not negotiating with terrorists, but we can clearly see that the CIA does exactly that, so I guess thats a slap at some administration that shall remain nameless. For a movie that has oil politics at its core, its surprisingly apolitical, even a bit left-wing in its sympathies. Still, liberalism being what it is, few on that side of the aisle openly endorse laying waste to an entire country to rescue some rich girl who rides away in a gas guzzling limo to end the movie.

The guy who spit in Dolphs chow during the opening received a fork in the eye, but theres no proof he died. The waiter at the outdoor café in Volka, however, most certainly breathed his last, even though his reaction to being shot in the heart was to shrug and slightly grimace, as if he spilled gravy on his shirt. And then theres the loony gypsy on the train, who is shot down like a dog while executing a particularly difficult leg kick, all while the band plays on. The best death, however, was when the Robert Wagner dude (played with no ability whatsoever by Michael Pare) is thrown out the window by Dolph after having a grenade stuffed down his shirt. The resulting explosion is a feast of blood and body parts, eclipsed in carnage only by the finale of Jaws.

This is the only movie in history where an actor named Vladimir Vladimirov plays a character named Vlado.