The assumption is that the Yankees will blow the Twinkies out in three games. Trust me, they should. Minnesotas staff ace is Carl Pavano who was last seen being pelted with rotten fruit on his way off the mound for the Yankees after he cashed almost $40 million in checks while on the disabled list. Minnesota has an anemic lineup, a cut-rate pitching staff, and fields a group of slap hitters who all look like second basemen from the 70s. The Yankees on the other hand boast a $238 million (or whatever the fuck it is now) payroll that features C.C. Sabathia. A.J. Burnett, Derek Jeter, Jorge Posada, Mo Rivera, Robinson Cano, Hideki Matsui, Mark Texiera, and Alex Rodriguez and quietly won 100 games because George Steinbrenner is now catatonic and being fed baby food.

Now, name five Twins who arent named Joe Mauer, Joe Nathan, Carl Pavano, and Justin Morneau (who happens to be out for the year with a bad back). They have a couple things going for them that are always pointed out, but are incredibly important. First, they dont give a shit who theyre playing. A week ago they were behind Detroit, and after a 1964 Philadelphia-style choke job and one of the best one-game playoffs ever, they are on their way to New York. For them this is like an early Christmas present. Second, they have the Metrodome and the Yankees have, uh, a stadium that looks like a really clean toilet bowl. The Metrodome is one of the all-time greatest home field advantages in the history of sports, so the Twins have one last chance to use it.

But it doesnt matter because unless Sabathia, Burnett, and Andy Pettitte have epic meltdowns or Phil Hughes starts choking in the eighth inning, the Yanks are looking primed for a deep run. How far they go depends on if they draw Los Angeles or Boston in the ALCS, but they take this series in no less than four.

While the Angels have the Yankees number, the Red Sox have theirs. Maybe its the last few ghosts of 1986 floating around or the specter of Donnie Moore rattling his chains and moaning in the bullpen, but for some reason, even when they get a big lead, the Angels cannot seem to get past these guys. My heart wants to believe that this is the year that they finally drive a stake through the heart of Beantown and slay this rotten dragon, but until they do, I gotta stick with the fact that they wilt against Boston.

So, with the hex-related bullshit out of the way, they keys to the series are whether the Angels can get into Bostons bullpen before the seventh inning, Boston can shut down LAs running game, and if the Angels closer Brian Fuentes can get over his late season case of the yips. Basically, the entire series is going to come down to a total of about five at-bats in what should be a series of close games, and if it swings to the closers, which it will, the Red Sox have the advantage. This is the only series where I am not using my head in the pick though, so Ill take the Angels in five. 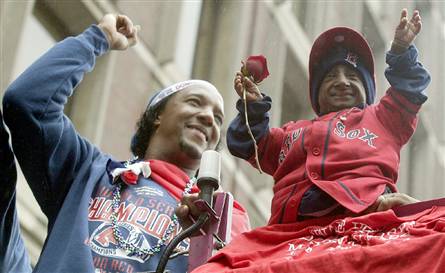 I dont know if its the power of Christ that compels the Rockies to make this sort of run seemingly every other year or if its the Dodgers inability to close out a season without sending their fans into tailspins of despair and doubt, but the Rockies are looking shaky and Philadelphia is going to bring them back down to earth hard. Colorado just lost their best pitcher, De la Rosa – who won 16 of his last 19 decisions – to a groin injury that could possibly keep him out of the entire playoffs. Beyond that, Jason Marquis did his annual second-half nose-dive that got him landed in the bullpen. No wait, he’s starting game four! Good luck. That leaves Ubaldo Jimenez and Aaron Cook on the mound to handle one of the best lineups in baseball in two parks that are built to accommodate home runs in bunches. Conversely, the Phillies get to trot out Cole Hammels and Cliff Lee along with possibly Brett Myers and Pedro Martinez who should be okay for about five innings. The one danger for the Phils, and the key to the series, is Brad Lidge who has become one of Ray Bradburys firemen. If the Rockies can keep it close, they could flip what I think is going to be a Phillies sweep into a demoralizing Rockies 3-1 series win. Watch this one drunk.

St. Louis has the Dodgers number this year and the Cardinals are a trendy choice to knock off the Yankees in the World Series. Oh, and Manny Ramirez can no longer hit either because hes off the juice or he inexplicably developed a conscience and has been racked with guilt and self-doubt over the steroids flap or his transsexual lover left him for a rich Brazilian man. Seriously, Juan Pierre is a better option right now. Toss in the double-barreled butt-fucking that is the inexperience and low self esteem of Jonathan Broxton and Clayton Kershaw and you have all the makings of the Dodgers pulling a Cub-like disappearing act in the opening round. I dont think that will happen because Joe Torre is pretty good at manipulating a clubhouse, but everyone said the same thing about Chicago the last two years.

Anyways, St. Louis got scary good over the last half of the season and since they have The Best Player in Baseball at first base, its safe to assume that everyone around Albert Pujols will be seeing decent pitches to hit. Chris Carpenter is back at peak form, Adam Wainright is the best pitcher no one has seen, Albert Pujols is Jesus Christ, Matt Holliday is hitting again, Rick Ankiel is safely tucked away in the outfield, and the Dodgers have completely stopped hitting.

Cardinals in four flushing out my dream of a Freeway Series so the Angels could shut up those obnoxious assholes in the Manny wigs.