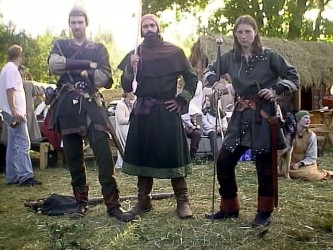 In my tenure at Ruthless Reviews, I have called openly for the sterilization of the mentally unfit, gulags for the aged and the infirm, retroactive abortions, and a societal purge of moms, whether of the soccer or security variety. I have said Fuck the Marines, celebrated military losses with glee and knee-slapping excitement, mocked the wife of an Enron suicide, and pushed the parent of a Down syndrome youngster to snuff out the half-wits slobbering candle with a well-placed pillow. I have dispensed with empathy, sympathy, joy, wonder, and simple human compassion, all without apology or regret. And yet, after years of boiling hatred and misanthropic rage, it is a speculative review of Zach Snyders 300 that at last releases the hounds of overreach. Despite hundreds of reviews, rants, and provocative statements over several years, it took a direct challenge to the received wisdom of a graphic novel to finally bring forth the buried passions of so many who had previously remained silent. Never before has a single review provoked so much hatred, dissent, and apoplectic rage; and were unlikely to see a repeat performance in the years to come, unless of course I finally get to that investigative study of LARP Ive been otherwise putting off.

Above all, the cacophony of grunts and whines have challenged my thesis because it fails to account for the fact that author Frank Miller wrote the original book in 1998, many years before President Bush even took office. It is the single point that has them befuddled, tongue-tied, and panting with uncertainty, much like their repeated first date practice sessions before the bathroom mirror. As such, my interpretation is dismissed out of hand; the product of a disgruntled politico, or  even worse  a disrespectful outsider. Original intent is all, and now, for perhaps the only time, we must remain rocklike in our literalism! Curious, though, that a leap of imagination  a wry flight of fancy  is so dictatorially punished by a group of people for whom boots of escaping and moons of Endor are topics of daily conversation. Fascinating, in fact, that this large mass of indistinguishable virginity, this screeching swarm of inconceivable loneliness, will not allow any push beyond the line that separates fact from fiction, as if their very lives of immersion in identities decidedly not their own could be forgotten as they howl against my perceived slight. Can the very people, then, who have at some point in their female-free lives worn capes, chain mail, pseudo body armor, faux bear skins, and wigs  man-boys who have applied to their microdermabrasion-craving mugs assorted paints, beards, moustaches, and scars  actually bemoan invention, a creative dance of criticism that dares venture beyond the obvious?

The question answers itself, for the true source of disgruntled offense lies not in the alternative perspective of a juvenile text, but in my unmasking of this groups darkest, most heinous secret: nerds, far from an aggrieved class of shy, introverted victims who are but one dance card away from the social respect that is their due, are, in fact, authoritarian monsters  cauldrons of intolerance and self-imposed supremacy so white-hot that they easily surpass the chest-thumping egoism of the very tormentors they deride on a daily basis. But while the enemies of nerdom actually get laid (while not needing to roll dice, draw cards, or tuck away the nutsacks of their brethren to do so) and manage to leave the house not under cover of darkness, these creeps and cretins channel their twisted menace inward, becoming the very epitome of subliminal aggression. Above all, they so worship the male form  the very one to which they bear no obvious similarity  that a world of hyperstylized violence and war becomes their playground of fanciful lust. This class of pseudo-warriors work out their passions for murder, bloodshed, and sphincter-blasting mania in the dark recesses of their own minds, convinced as they are that on the day when civilization crumbles under the weight of its own depravity, they will lie in wait; a new order to surpass the old.

Purple prose aside, geeks, goons, and shut-ins hate my review because I at last told all the world that, at bottom, they love war even more than the most battle-hardened Marine, and to every last, chicken-legged one of them, they are far right buffoons posing as empathetic sweethearts; armchair soldiers drooling at the sacrifices of others as they act out their inadequacies on the world stage. They romanticize slaughter  the very meat grinder that would eradicate the world that never brought them to the table  because, as with all myth throughout time, they can be reborn as gods in our midst. For too long, their juvenile curiosities   comic books, video games, role-playing weekends otherwise spent in stupefying silence  have been dismissed as retreats into silliness, when in fact they are calculated efforts to unleash the barrel-chested fascists within. The weapons they wield, and the symbols to which they bow, have but one end in mind: total domination. Or maybe its as simple as saying that nerds are as protective of their turf as gang leaders; that they want their world to remain free of politics or social context, for then they can live forever in a whirlwind of beautiful queens, heroic gestures, and impossibly hard abdomens, all without the responsibility of their implications. But I prefer the former, after all. Never has a group of turds so humorless, so lacking in the imagination they claim to celebrate, been so unfairly inflicted upon a stronger, wiser class of persons. The more they bare their teeth, the more I know Im right.