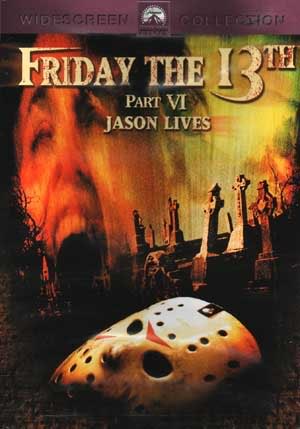 Burt, war games leader and resident sexist, arm ripped off before being thrown against tree.

Larry, Stan, and Corporate Chick, war games participants, all butchered together with one swipe of the machete.

Steven and Annette, couple in love, skewered together like human shiskabob while on motorcycle.

Nikki, resident slut, head smashed through side of motor home after mindless sex.

Cort, resident stud, knife to the head as he pilots said motor home.

Paula, dimwitted counselor, viciously slashed before being thrown through window.

Cop #1, resident bumbler, knife to the forehead near the lake.

Two brief make-out sessions lead to a pair of deaths and a prison escape, but the lone fuck-fest, between Nikki and Cort, is one of the series most sustained. Nikki rides Cort like a stallion, demanding that he last the entirety of a ten-minute rock song. Exhausted, hes saved by Jasons rumblings, promptly blowing his wad well short of the goal. For Cort, the abbreviated orgasm is his last.

Most obviously, Jason is literally resurrected by a bolt of lightning from an angry sky, indicating Gods need to punish more sexual transgressions. As this was 1986, time was running out on Reagans quest to rid the world of promiscuity. Still, that paled in comparison to one of the series most blatant nods to the power of Jesus. Faced with a blade-wielding Jason, a young child recites the Lords Prayer and, pacified, he leaves her alone. And a child shall lead them? Indeed, as not a single kid was harmed in the entire movie. Teenagers with erections, by all means. But spare the innocent!

Jason belongs in hell, and Im gonna see he gets there. — Tommy

Dont piss me off, junior, or I will re-paint this office with your brains. — Sheriff Mike

Signs of the Times:

Corts torn jeans and Walkman established him as a Reagan-era icon, but it was the music — no fewer than two Alice Cooper ditties from his then-current Constrictor — that dates the piece.

Jesus Christ, Tommys even more of a hunk this time around! So much so that he grabs the immediate attention of babe Megan, who falls in love because her father says hes dangerous and likely a homicidal maniac. More than that, though, was the tongue-in-cheek tone. Its arguably the most self-aware so far, especially when the caretaker looks straight into the camera and says, Whyd they have to go and dig up Jason.Some folks have a strange idea of entertainment. In many of the scenes, Benny Hill music would not have been entirely inappropriate.

Jason tosses a man over his shoulder with little effort, tears off a mans arm, slams anothers face through the side of a motor home, twists off yet anothers head, and keeps plugging away despite being hit in the head with rocks and shot at least two dozen times at point blank range.

As a way of announcing its silliness, the opening credits allude to James Bond, as a close-up of Jasons eye reveals an even smaller Jason, walking much like 007, turning suddenly towards the camera and, rather than firing a gun, throwing a machete.

Hawes, the first murder victim, is the dude who played Horshack in Welcome Back, Kotter. In addition, Crystal Lakes name has been changed to Forest Green. And, despite being the worst of the series so far, it does feature Alice Coopers Hes Back (The Man Behind the Mask) during the closing credits.