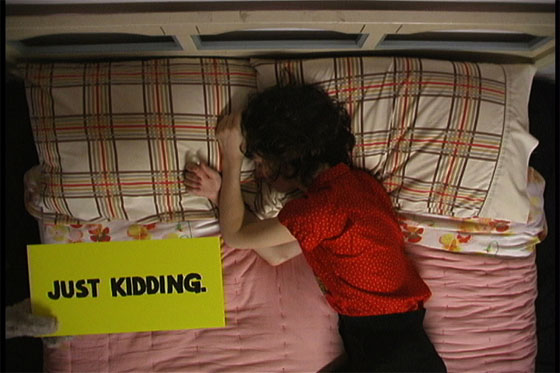 Born in 1974 in Barre, Vermont, likely to a bearded mid-wife as the winter wind whipped a patriarchal moon, Ms. July, merely responsible for the criminal act otherwise known as Me and You and Everyone We Know (merely in a way that Stalin merely purged his republics of entire generations), is perhaps the decades most emblematic atrocity; a self-absorbed, self-involved, dull-witted razor across the wrists of a dying culture who so upped the quirk quotient that well likely never again witness a straight face. Her maiden cinematic effort, the type where her sweet-tempered cancer of a character asks only that you call her at 3am, utter the word macaroni, and return to your obsessive navel-gazing, left me reeling for the better half of the decade, and at last gave the Mark David Chapman in me my own personal John Lennon. And then, as if to nudge us ever closer to the brink, she released a collection of smirking short stories, No One Belongs Here More than You, coupled with the short film, Are You the Favorite Person of Anyone?, which posits that if someone, somewhere isnt thinking about you every minute of every day, its best to fill the gap yourself, preferably with doodle-ridden post-it notes. Among her other accomplishments, she wears funny hats, goofy glasses, and wide belts, and isnt above going out in public sans bra. She also believes that if it cant be done with a dollop of gay, a cup of whimsy, and a bucket of menstrual blood blessed by an Apache medicine man, it isnt worth doing at all. Thankfully, shes left us the worlds worst website (www.mirandajuly.com), which obnoxiously shifts everything to the right side of the screen, while proving that any revolution worth its salt must first figure out the ideal daily affirmation to leave on ones pillow. Id wish a brutal rape upon her vile soul, but shed only turn it into an award-winning performance piece.

Every decade needs its feminist icon, and who better than a self-righteous, screeching slab of entitlement fury portrayed by Julia Roberts? Oh, that Erin, having all those kids by all those different fathers, flying into a rage when her free babysitter has the audacity to move away, or believing that big tits and a gaping vagina are reasonable substitutes for a law degree. Shes the All-American gal: pushy, vain, and compensating for her mental midgetry with sassy put-downs and the kind of reverse-snobbery only a white trash mother could love. And why not? While others slave away with the actual heavy lifting, shes sitting on assorted couches listening to sob stories and bullying boob-struck men into letting her photocopy sensitive documents. By all means pay her millions of dollars! Yes, shes the kind of woman who fucks degenerate bikers, quits jobs where shes not allowed to dress like a prostitute, drops out of school in the 3rd grade, and nastily rebukes anyone who isnt charmed by her abusive demeanor, all while bemoaning the unfairness of a cruel world. And yet, shes consistently rewarded for her efforts, as if to argue that because women arent cut out for life with accountability, they should chug any cock that will sign their paycheck. Its not a bad argument, if only the film meant it. No, Erin is the bulldog heroine in the best populist tradition; the relentless bur in the backside of corporate greed and masculine indifference. In reality, shes the decades flowering of femininity: the world will forgive your hateful, bitter, brain-blasting ways so long as you look good in a mini-skirt. Act like this with the mug of Betty Friedan, and guess wholl be collecting unemployment.

We all know a guy like Zach Braff –  hip, smug, indifferent to the worlds turn  but how many secure the necessary funds to write and direct a motion picture? Fortunately, the world is unkind, though this film and its rush of imitators are enough to degrade our collective taste all on their own. Yep, theres adorable Zach in the corner of the classroom, gripping his dog-eared notebook while he chews pensively on his writing instrument. He stares at the ceiling for a moment, flashes that unmistakable grin yet again, and quickly jots down another idea.  Hell recall bits of a conversation he had the week before, adding a dash of color to push it along just so into the realm of the unbelievable. Here a scene, there a scene, all lacking continuity, of course, but making for brilliant set pieces in search of an idea. Year after year, Zach collects these tidbits and morsels of twee for the movie to come; the one he feels compelled to make, and will most assuredly bring him the fame promised by guidance counselors and smothering Jewish mothers alike. The hero, a drug-addled young man coping with loss, who believes recovery can only be found in the mad eyes of an eccentric epileptic who conducts hamster funerals when she isnt collecting your tears in a Dixie cup. And be sure to add the kid who wears a full suit of armor at the breakfast table, or the Gulf War trading cards, or screaming with cathartic release next to a boat thats been turned into a house, or maybe even a rich kid who invented something he calls silent Velcro. Or match the heros shirt with the wallpaper while a sad pop song plays on the soundtrack. Or even the odd duck of a black guy who becomes a detective to find out who exactly urinated on his video game console. My god, how we loved them all. Representative of no one, reminding us of even less, we were transfixed in no uncertain terms; imagination unhinged in the face of cruel conformity. He spoke at last for a generation that cant stop talking about itself.

She first came to my attention in the fevered nightmare of All the Real Girls. She told me she had a dream where she invented peanut butter. Then she stood  like that  in the bowling alley. You know, the way one does when they want the whole fucking enterprise to shut down and look in their direction. She demanded love, and got it, because every man on earth should want the girl most likely to leave you 634 voicemails on the Friday you dont call her back. Shes the girl who speaks in riddles, sing-song blather, and allusions to college radio. And then in Yes Man, where she fronts a group called Munchausen By Proxy, a bar band with three fans, just in case you wondered how she could afford to live in Los Angeles. And in case she didnt have you convinced of her authenticity, she put a seahorse on her head to, you know, separate herself from someone who gives a damn. But again, youll love her, because shes so cute and cuddly and warm and fuzzy and, well, psychotic, but in a way that might lead to anal. And then, in (500) Days of Summer, shes the new Annie Hall, a la-de-da sweetheart for a new generation unaccustomed to sanity in their women. She has you at hello because shes unpredictable, zany, and prone to chronic unemployment. Shes the girl who doesnt have to try, falling back on soft tones, warm eyes, and a paycheck that involves leading joggers at 6am as they learn how to take pictures as they sprint. A fuckable Miranda July who loves video games, comic books, and your kind of music which is so fucking cool, if only you dont mind the crying fits, bizarre disappearances, and requests to dance naked in the rain. Shes hot, but not too hot; approachable enough for desperate nerds everywhere who dont mind a pink, spangle-dusted boot heel on the groin whenever you fall and fall hard. Shes irony incarnate, and gone by breakfast. She was also in my favorite movie of the past 25 years, which might be her most devious crime yet.

When the history of this most appalling decade is written, few need consult a source outside the comfy confines of Diablo Codys ode to the improbably articulate teenager; the one film of its time so pre-occupied with being clever and smarmy and whip-smart that it failed to realize its own rich status as the most conservative slice of American culture since the slasher film equated sex with violent death. But thats our Diablo: so desperate to jam in allusions to cartoons and TV icons that pre-date our heroines birth by mere decades that she becomes the only pro-life advocate with pink hair and a guild card. Sure, young people do in fact speak in sly slogans and tele-speak, but the ones who get pregnant dont exactly have two working parents around to gently poke their ribs. Hell, they dont even stay in school. But rather than delve into the reality of teenage motherhood, with its poverty, neglect, and decided humorlessness, our sweet Juno makes it so damn appealing that wed gladly submit our own for insemination if it meant theyd be as well-read and up to speed on classic rock. Its the Hollywood gloss that grates, and the insistence that language should get us nowhere but the next witticism. Theres also a creepy condescension afoot, where Diablos sense of superiority is voiced by the stepmom-cum-nail tech, a stand-in for the armchair populists sense that expertise or accomplishment are diminished in the face of knowing the names of He-Mans comrades. Where being flippant can get the job done just as well as training, education, and dedication to craft. And where even the most sarcastic, mean-spirited demon cant Shop-Vac her spawn because being smart is always a cover for being scared shitless. Oh yeah, and Michael Cera. And the Daniel Johnston-inspired soundtrack. And the track team motif. And a mailbox overrun with Tic-Tacs. Because we all know the corner store that stocks them by the thousands.

Slumdog Millionaire  Because the most beautiful woman in India shall be sold into prostitution and remain a virgin.

Wes Anderson  Because you forever ruined Me and Julio Down by the Schoolyard.

Adrienne Shelly  Because shes dead and gone and I want to kill her myself for Waitress.

Lady in the Water  Because having a character named Cleveland Heep was not the worst thing about it.

Jennifer Hudson  Because she now has exactly one more Oscar than Stanley Kubrick for bleeding out eardrums worldwide in a ghetto fright wig.

The Pursuit of Happyness  Because homeless black men so rarely become millionaires. Or demand sole custody.

Rent  Because transvestites with AIDS should pay for their own damn cups of coffee.

A History of Violence  Because William Hurt is not Irish. Or a gangster. Or an actor.

The Passion of the Christ  Because I dont like to mix my anti-Semitism with my homoeroticism, at least not in public.

What the Bleep Do We Know?  Because New Age is the new Christianity. And stupid is the same stupid.