Well, it is kind of cool that an outlet as big as moviephone… I mean, sigh, moviefone has chosen to essentially steal our content. Even if I never read their usual articles about the “top 10 movies from our sponsors in contrived category “X”  that are now available on blu ray!” I am kind of half flattered and half embarrassed. But, with the exception of file sharing, stealing is wrong. So let’s just get down to it. Our 80s Action articles start of as follows, then go on to waste a bunch of space with actual writing and junk. 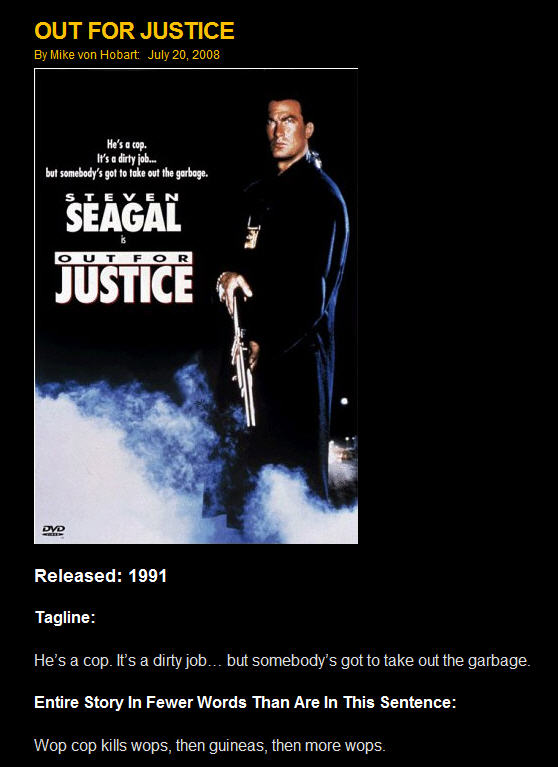 The moviefone article has a little preamble about how Steven Seagal is not as popular as he once was and then consists of nothing more than a list of his direct to DVD movies using the exact same format: release date, DVD cover or poster, tagline, tongue in cheek summary.  To author Kevin Polowy’s credit, however, he doesn’t copy our format any further by continuing with actual writing.  So here’s the moviefone version: 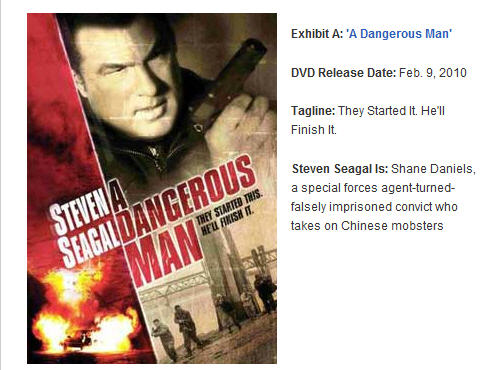 I guess the similarities speak for themselves.  Oh, and yes, we did do a series on the direct to DVD videos of 80’s action stars including four of Seagal’s films. So it’s not like moviefone even came up with that aspect of it.  The format is tweaked slightly in our version of the direct to DVD reviews.  For those, we still have the taglines, but the summaries are longer.  Also, we decided not to use the box covers as much to try to freshen up the format.  I guess freshening up the format is less important if, like Polowy, you are just stealing your format from someone else and hoping nobody will notice so that it will seem fresh.  But, other than that… see for yourself.  Here’s our review of Out For A Kill. 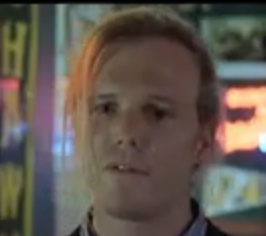 Of course the joy to be found in later Seagal has been explored in several other outlets, like The Film Fiend as well, and everybody fucking knows about these movies and making fun of them is a very common internet past time. Polowy didn’t just stumble upon this incredible discovery, as he tries to represent. He’s dumbing down and regurgitating content from all across the web and pretending to do something original. He is however, specifically ripping off our format to do it.

Obviously, this pisses me off because it involves our site.  But there’s a trend towards very big sites like this one and The Huffington Post simply stealing content from smaller sites and communities and passing it off as original articles.  In the case of moviefone, they actually bothered to rephrase our stuff rather than copying and pasting it.  Kudos to them!

The net is a huge, stupid clusterfuck and one function of the high traffic outlets should be to cull some of the better, but more obscure content out there and bring it to their readers.  But be fucking honest about it and don’t steal.  Maybe include one whole sentence saying “here is some cool shit I found at another web site” or “let’s use the Ruthless 80s Action formula for a quick glance at some of Seagal’s recent work.” Then, everyone is happy. Don’t pretend to have made it up yourself, because then you reveal yourself to be a hack with no integrity.  Or worse still, one day, you might just push the wrong man too far. Polowy, I’m gonna take you to the fone.  The blood fone.