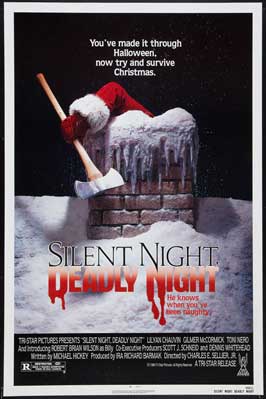 An escaped mental patient dresses up as Santa and does what we all wish we could do at some point during the holidays.

Until Terry Zwigoffs Bad Santa, the 1984 slasher pic Silent Night, Deadly Night was the most controversial movie ever made about Christmas, bringing calls from the moral scolds of the day to have it banned from theaters. While Zwigoffs film is a hilarious, mean-spirited romp through drunkenness and coarse language, Silent Night, Deadly Night showed not one, but two Santas as cold-blooded killers, as well as numerous exposed breasts, evil nuns, and frightened children, all without a trace of intentional humor. While its nowhere near as good a film, of course, it has its moments of rare charm, and is arguably the most radical movie ever made about the holiday season. That said, the production values are atrocious, the acting even worse, and the effects somewhere just south of a student production. Nevertheless, what we have here is a cinematic treat that makes a direct link between religious fundamentalism and murder, though the eras conservatism sneaks through a bit whenever the clothes come off. Still, its undeniably entertaining as a period piece, and who on earth could judge a brutally ugly death march set in Utah, of all places?

The movie opens in 1971, as young Billy travels to grandpas house with his younger brother and beaming, wholesome parents. Little do they know, an escaped lunatic from the Utah Mental Facility is on the loose, and has just shot a clerk to death in a botched robbery. To make matters worse, the killer is dressed like Santa Claus. Billys parents notice Santa by the side of the road with his hood popped, assuming that he needs a bit of help. And hell, they can introduce Billy to the man himself! But instead of Christmas cheer and a twinkle in his eye, Santa is armed to the teeth, and blows the father away, getting blood all over his new sweater. He then marches over to the passengers side, and tears the mom from her seat. He beats her up, throws her down, and rips open her shirt, revealing a nice set of tits without a bra in sight (foreshadowing: not a single woman in this movie wears a bra). Before actually raping her, though, he gets frustrated and slashes her throat. Billy witnesses the entire episode and though he survives, is sent to St. Marys Home for Orphaned Children, which just happens to have the exact same sign as the mental ward. I guess grandpa didnt want the poor boy.

Cut to December, 1974. Billy is now among dozens of wee ones celebrating Christmas in a bleak, Dickensian warehouse. A few of the nuns look out for him, but Mother Superior is a nasty bitch, and she beats the snot out of a copulating couple to prove it. Billy also witnesses this attack, which forces him to forever associate sex and punishment, which of course is not at all the Catholic way. Billy continues to be haunted by dreams of the gruesome murders three years earlier, and now cant stand the sight of Santa (or sex) without flipping out. Mother Superior, wonderful lady that she is, commands Billy to sit in Santa’s lap when he pays a visit, which prompts Billy to scream and shake, and eventually unfurl a right hook that could drop Ali in his prime. Santa flies through the air and crumples on the ground, while Billy is punished again for his crimes. The tension builds and we know the little boy is but a few years from boiling over.

We then flash forward ten years to Iras Toy Store, where Billy asks for a job in the stock room and is nearly turned down until he flashes his trunk-like arms and golden boy smile. Billys all grown up, and how! Mr. Sims, owner of the shop, looks him up and down like a slab of beef, so we know there will be after hours activity. More to the point, since its clear that Mr. Sims is gay, and that this is the Reagan era, hell be dead within the hour. Billys first week or so on the job is productive, and accompanied by the cheesiest song ever featured in a film about killing the innocent during the holidays. Titled, Its Always Christmas on the Warm Side of the Door, none of the lyrics match the on-screen action, and further, make us wonder how something so upbeat made it into a film featuring insanity and bloodshed. Billy seems fine, though, that is until hes asked to play Santa by Mr. Sims, which prompts more flashbacks and sweaty, shake-filled stares into space. Billy threatens the kids, demands that they not be naughty, and during breaks, falls asleep and dreams about fucking big-titted women, only to slice them to ribbons. The madness has begun.

At the Christmas party, when two co-workers sneak away to the store room for a romp, Billy follows, and when the guy gets a bit rough, Billy steps in and strangles the bastard with Christmas lights. Sure, he saved the woman from rape, but shes still upset, so he guts her like a fish. Throughout, he sounds like Frankensteins monster, chanting, Punish! Punish! And because they were partially naked and near orgasm, their deaths were sanctioned by Santa, Jesus, and the President himself. And then the fireworks begin. Billy slams a hammer into Mr. Sims head, leaving him to die in a pile of boxes, and then shoots the last co-worker with a bow and arrow. She drops for the last time in a pile of fake snow. Somehow, the good nun from Billys childhood shows up after the killings, screams, and calls the police to be on the lookout for a murderous Santa.

Next, we visit a semi-nude pair of teenagers getting in on while sprawled out on a pool table. Tits come out, his shirt comes off, and he utters the classic line, Two ball in the corner pocket. But his girlfriend has to let the cat in, so she runs upstairs, fake tits stiff in the wind, and yells out the door. Billy appears out of nowhere with his righteous axe, once again bellowing, Punish! Punish! Theres a brief struggle, but the topless tramp is eventually slammed onto a large set of antlers hanging on the wall. The boyfriend runs up and is briefly strangled with a phone cord, only to be thrown out the window. Again, we hear Punish! filling the night air. Billy does run into a little girl before he leaves, and while hes tempted to kill her, he thinks twice and instead hands over his box cutter as a gift. Billy then runs into the forest and decapitates a kid who stole someones sled.

Anticipating Billys next move, the good nun and a sheriff drive to the orphanage, hoping to save the day. Another officer arrives first and, having been told to shoot to kill, assassinates Santa in front of a dozen terrified children. Only this Santa wasnt Billy; it was Father OBrien, and he didnt respond to the cops calls because hes old and deaf. The kids are pushed inside, the building locked down, and Mother Superior leads everyone in cheerful Christmas carols. Billy arrives, slams the axe into the cops chest, decapitates a snowman for good measure, and is let in the orphanage by a trusting child. Just as hes about to bring the axe down on the vile Mother, hes shot dead by the other sheriff on the case (you know, only two officers in the entire state hunting down a serial killer). Still, Id like to think that Mother Superiors chant, There is no Santa Claus! There is no Santa Claus! saved her life more than the heroic officer. As Billy dies, the axe falls at the feet of his younger brother, who is clearly marked as the heir apparent.

So its an interesting mix of the reactionary and the rebellious; a film that aims to scare the shit out of kids by making them think Santa is after your life, not just your milk and cookies, but one that also kills everyone who even thinks about fornication. Religion is clearly a source of evil, but as its Catholicism thats targeted, one could think that thats well within the all-American tradition. Women are loose and easy, but men are weak and limp, unable to protect their womenfolk from harm. Being a good Samaritan will get you shot between the eyes, but so will having a gun under the counter in your convenience store. And what kind of movie set in the Beehive State doesnt feature a single Mormon? And what sort of parents let their kids go sledding on Christmas Eve when its nearly midnight? The kind that refuses to settle in as a typical horror film, friends, and one that has no other motivation save the massacre of seasonal cheer, innocence, and good taste. In other words, a film worth revisiting during the holidays. Im expecting to make it an annual event myself.