Among the more indelible images of the year, surely to remain blasted into my psyche well past Thanksgiving, is that of Johnny Knoxville, dressed and made up as an old man, waltzing down the street oblivious as you please, while a phony, but remarkably believable nutsack peeks from an opening in his ludicrously tight shorts. Peeks? No, it actually hangs, and Ill be damned if I didnt roar like a retard at a velvet giveaway. Perhaps it is because his dirty grandpa is so authentic, or perhaps because it seems built into our very DNA to laugh uproariously at the ill-timed exposure of our privates in a public setting. Who knows, but there I sat — and I had tears in my eyes, and even down my cheek. The other hidden camera event involved director Spike Jonze re-imagined as an elderly woman, only with grotesque tits sagging down his chest, as if begging to be smacked around in a game of tetherball. Jonze accosts street-side salesmen, asks stupid questions of passersby, and, on his first appearance, tears his dress upon leaving a car, so that his god awful nakedness could be on pitiful display. Without fail, I loved every eye-popping second of it, and now hope that between gigs, Jonze will star in a burlesque show. Hes that good.

Nothing else in Jackass Number Two would tickle my funny bone as severely as the old folks, but theres much more to enjoy, as if I had to convince anyone already familiar with the show. This, of course, is not a movie at all — and surely not one to be analyzed — but merely a series of brutally masochistic acts, all with the most overtly homoerotic imagery ever seen in a mainstream motion picture. If anything is clear about these people — Knoxville, Steve-O, Bam, Chris Pontious, Preston Lacy, Dave England, and the inimitable Wee Man — it is that they never waste an opportunity to show their bare asses, and even appear fully nude if necessary. Sometimes the butt cheeks require an appearance (taking shits and farting wouldnt make sense otherwise), but for the most part, they enjoy male asses for their own sake. They like to look at them, touch them, be as near as possible to them, apply ointments and lotion to them, and even, when the mood is right, singe them into advanced states of infection with penis-shaped branding irons. The pain is our pleasure, of course, for what but delight could follow the observance of consenting adults submitting to humiliation and torture? Its like peeking behind some forbidden curtain, only being exempt from any real guilt. If they are severely injured or even die, thats exactly how theyd want it. 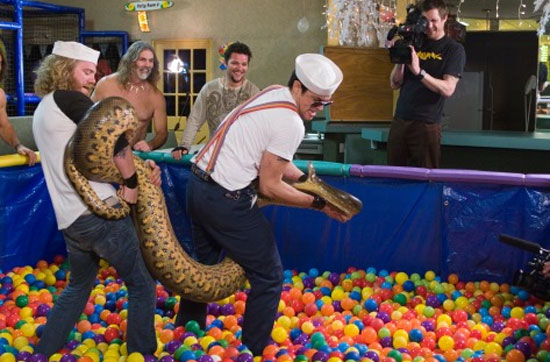 But the gayness never goes away for long. I half expect an on-screen orgy at some point, perhaps in the middle of a busy highway while being shot at by paint guns and flaming crossbows. Hell, we even get a closing musical number that would make any Brodway producer green with envy. The homoeroticism was never as potent, though, as during the butt chug, which involved Steve-O taking a healthy amount of beer into his asshole via a bong, all while sticking his legs straight into the air. The all-male cast and crew stood at rapt attention, which soon yielded to a man with a plunger, who helped suck out the tasty beverage from Steve-Os colon. It was a delightful scene in every way, if only because it brought something to the screen I had never expected to see in a thousand lifetimes. And for a cinema buried beneath tortured clichés and dreadfully dull remakes, why not applaud images that have no forerunner? Grabbing an overheated horses cock from the vagina of another horse, placing it in a vagina-like sheath, bringing said horse to climax, and then offering the sperm to Chris for consumption? Its in there. A grown man eating horse shit for $200? Done. A nude midget being jumped on by an obscenely obese man, who himself is in possession of the worlds largest set of balls? There you go. And yet another unhesitating young man dressing up his penis as a mouse and sticking it inside a cage full of agitated snakes? Absolutely. 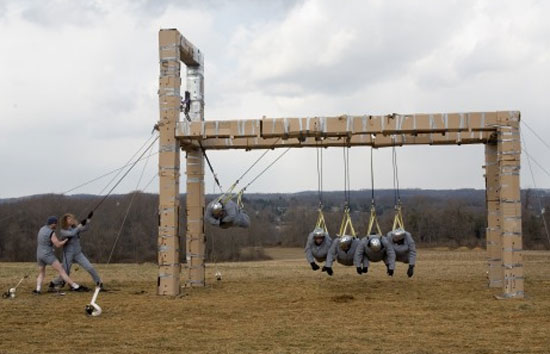 Even now, Im not the biggest fan of Knoxvilles daredevil exploits, such as rockets to the moon or propelling shopping carts into a lake, but Ill take them nonetheless. And sure, riding giant bicycles, landing face first on the pavement, or blasting rubber balls at exposed flesh dont provide the same thrills as sticking a fish hook through ones cheek and fucking around with sharks, but the hits and misses have a way of blending together in a perfectly juvenile concoction, best sipped while glassy-eyed and distracted. And yet, despite the sheer idiocy of what we see and how we react to it, theres something noble in it; as if performance art, once an essential element of the art world but now reduced to jaw-droopingly esoteric gibberish that fails to evoke any sort of reaction at all, has been scrubbed clean, re-invigorated, and presented to an audience that could not care less about the personal or the political. No longer feminist, post-structuralist, or deconstructionist, these artists turn the human body into an engine of self-inflicted violence, as if to make it okay to laugh at the absurdity. Theres a message here, but not anything requiring an advanced degree to understand. At this point in our history, nothing could be more apt.

Surely these freaks have nothing to say about the world we live in, but consider Knoxvilles shirt: Fuck art.lets dance. In one sense, its the nitwits revenge; fuck high-brow pretension and the very idea that movies or TV should concern themselves with anything other than mindless entertainment. On the other hand, its a refreshingly honest declaration about what usually results from noble intentions (i.e. boredom). Art, so debased and devalued as a term as to be nearly valueless, has, at least in recent times, been used less as an accurate label of content, and more as a political sledgehammer to inflict taste and decency on others. If its not good for you, it is said, it can only serve to harm both the individual and the culture at large. Art in service of morality is almost always propaganda, but its greatest crime might be in its failure to provide a good time. The very concept of Jackass, then, is a rebuke to the idea that edifying entertainment is the only goal worth pursuing. Moreover, it understands that while human beings erect great monuments to their alleged desire to strive and progress, what they really want is to have the other guy feel the sting of lifes woes. All of our frustrations, resentments, hatreds, and bitterness can be expunged in one great swoop, all by watching our fellow man put each other through the ringer. And the more blood, semen, shit, and pubic hair, the better.