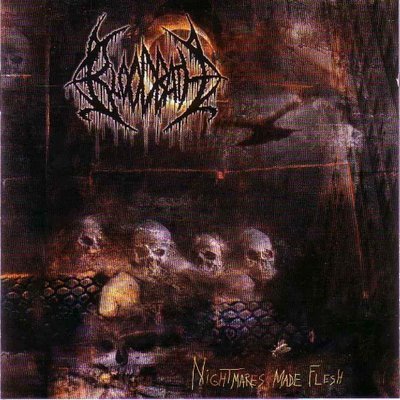 After hearing the single, Eaten, from Nightmares Made Flesh, I decided then and there that I didnt need to hear any more of Bloodbath. Eaten is one of the lamest, most preposterous death metal songs ever, and in a genre of music dominated by campy themes of apocalyptic ruin, shredded torsos, and serial murder, its pretty god damn hard to write a song that might be considered the lamest this late in the game. With Eaten, somehow, Bloodbath has achieved a previously unattainable state of silliness, where Tägtgren goes on about how he wants his body torn limb from limb and consumed. He growls, My only wish is to be eaten. Thats right, eaten. Seeing as how Ive never been much of a Hypocrisy fan, I wouldnt mind if Tägtgren ate his own ass at this point.

Nightmares Made Flesh was recently given to me and Im excited to say that minus Eaten, its actually quite listenable. Hell, parts of it are pretty good, way more than anything on the painfully mediocre album with Åkerfeldt. Much of this is a result of a change in lineup that kicked Dan Swanö off the drums and over to bass where he belongs, not to mention an infinitely better production job to boot. This is just straight up old school style death metal, through and through. Early Entombed, Grave, and Dismember all come to mind so if youre a fan of the Swedish variety, this isnt something to pass up. My main problem with the album is Tägtgren. Sure, the guy can still hurl some commanding vocals (old Petey is pushing forty, people) but he never fucking shuts up. Is it really necessary to fill every moment of downtime with random screaming and nonsensical growling? I mean, while death metal has always been about nonsense, has it not always been about the musicianship as well? Granted, good death metal vocalists have always overridden dull and unremarkable riffs with wanton roaring, gurgling, or laughing, but Nightmares is nothing to drown out completely.

Apparently Tägtgren is gone now and the band is looking for a charismatic replacement to fill his giant, wooden clogs. I wish them the best of luck because Id like to see a third effort with a different, not so over-the-top vocalist. Anyhow, Im not done discussing Eaten. Its not fair to say it sucks based solely on lyrical content because most metal lyrics are inherently absurd. It got me thinking of other death metal songs that share the same ludicrous earmark, be they shitty tracks or good ones. Consider Tools of the Trade by Carcass for example, a little jig where Bill and Jeff go back and forth naming surgical instruments. It rules not only because its a great song, but because it never took itself seriously. Eaten blows because its a colossal drag where Tägtgren distinctly and concisely speaks about being devoured with the sincerity of a two-dollar Tijuana whore. Was I actually sitting around listening to a near forty-year-old man talk about being chewed to death? I guess I was, but not for long thankfully. In fact, Im convinced its songs like Eaten that kept me a reclusive, virgin shut-in throughout my teenage years.

Ive often wondered how young men arrive at and revel in the abyss of black/death metal. Is it a response to the pressures and angst of being a teenager? Perhaps coupled with a turbulent domestic life and lack of female interaction? Obsessive masturbatory habits? I deal with plenty of kids and I certainly dont see too many of the well-adjusted listening to Exhumed or 1349 on a regular basis. For me, black and death metal provided the ideal soundtrack to accompany my contempt for religion and humanity during my formative years. But by maintaining a strict aural diet of this music into my twenties, did I prolong my seclusion, hatred, and social ineptitude? Somehow, through all of it, I emerged relatively unscathed. I can only hope the kids these days can do the same whilst feverishly polishing their cocks to the pigshit that currently passes for black and death metal. While Ive long since let go of the mane, the virginity, the anger, and a fraction of the hatred, its evident to me that many of the adaptively ill-equipped, lesser metalheads still slogging through the trenches wont be able to cope. Consider the banal and unintelligible lackeys at over at ANUS.