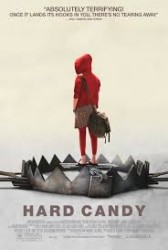 The new film Hard Candy is, above all, a showcase for the astounding performance of 19-year-old Ellen Page (playing 14-year-old Hayley Stark), a newcomer who, if there is any justice in the cinematic world, will continue to take bold risks rather than simply aspire to be the next Sharon Stone. Page does so much with this role, in fact, that shes bound to let us down with subsequent efforts. Moving from naive, cutesy, and frail to assertive, brash, and terrifying, she never lets us see the strings and always falls back on a winning authenticity that cannot be taught, at least not in any of the sausage factories that pass for acting schools in this mediocre culture. Needless to say, shes from Canada. As the young tart who, at first blush, appears to be falling in typical aw-shucks fashion for an internet suitor several decades her senior, she is so nuanced and multi-layered that we gasp in shock that an American movie has seen fit to provide a difficult, complex character. More than that, though, she goes all the way  never compromising as a fictional creation or as an actress.

We anticipate a last-minute rug pull, or at least a catch to temper the intensity, but thankfully, one never arrives. This chick is hardcore, and shes cheerfully, defiantly unapologetic.Throughout, I was reminded of the painfully underrated Polanski effort , though in that stagy film, the setting and motivations were decidedly adult. Here, the focus of rage and untold violence is a young girl, and yes, were much better for it. As shes bookish, and precocious, and instinctively clever, shes instantly engaging, and shes not merely reading lines like shes out of her element. While we dont get any real back story or characterization in the classic sense, we accept that this girl  flirting her way around the web like a seasoned pro  is exactly as we find her, and whats left out is not so much frustrating as it is intriguing. Sure, I want to know more, but Im just as willing to admit that if such knowledge became available to me, I might cover my ears and walk away.And shes that much more a mystery because her story  and her actions  do not lead in a predictable direction, especially when Jeff (Patrick Wilson) asks her back to his home. I knew the film involved a predator and his prey, but had no clue the roles would soon be reversed, and that the horrors all men live with on a daily basis would soon be fed to me, much as a bitter pill.

So as we begin, Jeff meets Hayley in a coffee shop after making arrangements in a chat room. They had been speaking for several weeks, with the usual exchanges of frank sexuality and private fantasies. Jeff is a photographer, which is the perfect way to get women of all ages out of their clothes. We suspect that hes lying, but once back to his home, we seethat we does in fact have the knack. Hayley is extremely bright and a bit unconventional, so she might in fact resort to the internet to find attention. Would she really accept a ride from a man who clearly desires but one thing from her? Her self-confidence might force us to answer in the negative, but that same spirit has likely alienated her from boys her own age, who as we know are scruffy simpletons who can barely wind their own watches, let alone converse about enlightened topics. Having arrived at the house, we again think we know where this is going, and for a moment I imagined a cut to some police station where an investigation would begin, but not before tearful parents arrived to provide more details. But this story has nothing to do with outsiders.

This is Hayleys focused, exacting revenge on the poor sap who believes he has the upper hand.Hayley knows all the tricks pedophiles use, so she drugs Jeff first and as he awakens, he discovers that hes bound tightly to a chair. What follows is a game of wits, only Hayley calls the shots, at least all the important ones. She has him pegged, you see, from the pictures on his wall to his sly way of working his way into the lives of the young girls he seduces. She even knows about his private stash of truly grotesque images, and figures out the combination through the most obvious deduction (child rapists still have a sentimental side, it seems). She levels accusations, charges, and other verbal lashings, and Jeff, despite denials, feels her almost cheerful wrath. Shes pissed, but not so much that she cant have a good time. But why the attack on this guy? She doesnt reveal much, and from all appearances, shes not a victim herself. Is she standing up for a friend? Making a statement against all mankind, or simply the penis and its propensity to wreak havoc on all it penetrates?

And this leads to the most talked about sequence in the film, at least for those who would rather have their balls remain fixed to their bodies. Having discussed her rudimentary skills as a surgeon (shes studied some of her fathers texts), she spreads Jeff on a table and preps him for the unkindest cut of all. Using only a bag of ice to numb the genitals, she proceeds with abandon, pushing Jeff (and the audience) to sweaty hysterics. Using just the right angles, sounds, and imagery, the scene creates a feeling of helplessness not unlike the infamous dental extraction in . And yet, despite the savagery, we never really ask her to stop. Some might believe a child molester deserves such a fate, but my reluctance to suspend operations has more to do with the thrill of the moment. Hell, Ive seen a lot in a movie theater  including untold death and destruction  but never before has a sweet-faced cherub ever removed two testicles from a screaming man and thrown them in the garbage disposal. If I was moved to applause, it was only for infusing a bit of originality into an increasingly unimaginative medium. My only objection was that I wasnt given a birds eye view.

Sure, it was a bit of a letdown to learn that Jeffs neutering was but an elaborate fiction, but as he wasnt aware of it until later, I could cheer the illusion for a bit. The twist also became a cause for alarm as I thought it might signal a change of heart, or perhaps a revelation of identity that would make her an undercover cop, or something along that oft-traveled path. But then came the rooftop sequence, and an ultimatum that forces Jeff to choose between humiliation and prison, or a quick suicide. Thankfully, Jeff decides to jump with the noose around his neck, fully believing that all the evidence of perversion will be destroyed, only Hayley adds an …or not once the decision becomes irrevocable. So yes, Jeff will be stone dead and posthumously raked over the coals, much to the delight of our young heroine. Shes put a sick bastard through the gauntlet, and why not? Right? Hes guilty, isnt he?

Its enough of a statement to reveal that deep down, so many so-called civilized human beings want to see others tortured to madness, but it becomes even more of a dilemma to call the scumbags guilt into question. What did he really do, after all? We arent allowed to see these damning photos (another nice touch), and Jeff never admits to anything substantive,even after being pushed to the brink. Is Hayley really striking back at what is universally believed to be the most heinous of crimes? Or is she sick and demented herself and just might have the wrong man? Even more fascinating, is she acting out her own fantasies of power and control, and Jeff will do simply because hes available and all-too-easy to manipulate? After all, arent we all guilty of making assumptions based solely on a few surface details and the fact that, for some odd reason never fully explained, we always trust the word of a child over that of an adult? The lack of answers  and the possibility that Hayley will keep going  are an unexpected delight, and help make the sort of experience that helps a cinephile wade through the doldrums of spring.