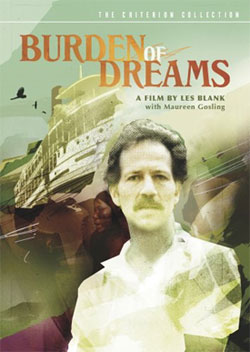 Herzog defies all odds to make Fitzcarraldo without killing Kinski

“We have to articulate ourselves, otherwise we are cows in the field.” — Werner Herzog in Burden of Dreams

Werner Herzog is a great madman of the cinema; an individual so obsessively driven that while we recognize his somber sense of obligation, we also detect a curious lack of joy. This is an artist in the truest sense of the word; a slashing, brutal force of nature who creates for no other reason than to stay alive. It would be impossible to imagine him in a state of relaxation or idleness; for the universe as he understands it only makes sense if he is always and forever on the verge of a complete mental breakdown. One can detect this despair in most of his films, but it’s never quite as clear as during Burden of Dreams, Les Blank’s 1982 documentary about the making of Fitzcarraldo. Perhaps only someone of Herzog’s hubris would dare make a film about someone so outsized and grandiose, but it is fitting that he should do so. For if Herzog had chosen instead to portray simple men and their modest ambitions, it is likely sheer boredom would have killed the inspiration. 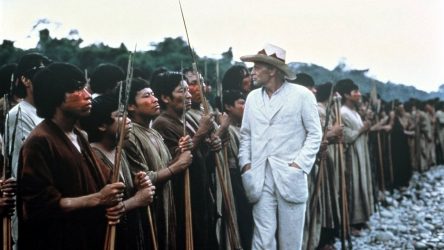 Criterion’s release of Burden of Dreams in 2005 had been anticipated for quite some time, and since it is available, the Herzog circle is nearly complete. No fan of his work can live without it, for within its 95 minutes is a stunning portrait of will, largely unseen in the annals of film. This crazy Kraut — this demented genius — tries vainly to tame that which he knows cannot be tamed (nature, as well as Klaus Kinski), and yet curses the result. He believes that he, like the character in his film, can haul a massive ship over a hill and through a jungle, and would be aghast at anyone who would dare ask why. Here’s the boat, there’s the hill, let’s get it done. He’s like Patton with a film crew.

The filming of Fitzcarraldo, as one would expect given its scope, was beset by problems from the onset of pre-production, and it’s a testament to Herzog’s dogged insanity that it was ever finished at all. First, the Indians of Peru and Ecuador (many of whom will act as extras and an ad-hoc crew) are engaged in a power struggle of their own, and death threats circulate the set, most of which are directed at Herzog himself. Rumors are in the air as well, including the belief that Herzog’s men plan to rape the native women. Someone even brings in a picture of the Nazi death camps and suggests that Herzog is somehow responsible! Perhaps this can explain why so many Indians speak quietly about Herzog’s “plan” to take the grease from their dead bodies and cook it up for his own amusement. All of this is before original cast member Jason Robards (eventually replaced by Kinski) is hit by a severe case of dysentery, forcing Herzog to start from scratch after having completed 40% of the film. Mick Jagger also abandons ship, preferring a Stones tour to the rigors of inhabiting the Amazon. 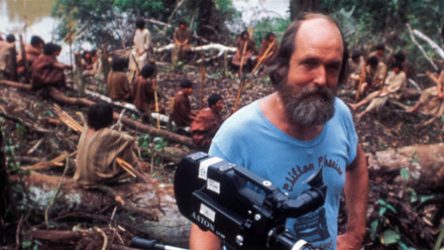 Herzog is also preoccupied by river levels (vital if the ship is to maintain its course), the hazards of remote locations (bugs, filth, snakes, frequent arrow attacks from rival tribes, etc.) and increasing hostility and impatience among the crew. He is also consumed with the need to preserve the local culture, although he has no illusions about the environment in which they live. Herzog is refreshingly unsentimental regarding nature, saying with blunt honesty, “I love it against my better judgment.” He also believes that there is no real harmony in the universe, and in a quote that should live down through the ages, he states, “The birds don’t sing, they just screech in pain.” Herzog sees misery, fornication, anger, vileness, baseness, and obscenity, not romance and peace. While he does not necessarily believe in God, he does say that if such a being exists, it no doubt created the land out of anger and spite. When so many well-meaning stewards of the earth speak to a nave co-existence (if not mastery), Herzog understands that we are engaged in a bloody (and losing) battle for our very humanity. 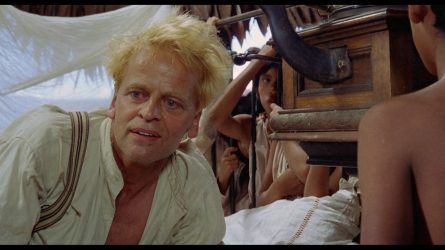 Herzog tries to do right by his enormous staff (even bringing in local prostitutes to sooth frayed nerves), but all efforts are compromised by his disregard for anything other than his magnificent obsession. When it is suggested that a 20 degree slope would allow for a smoother transfer of the boat over the rugged terrain, Herzog demands 40 degrees, solely because his “metaphor” would be lost if the task weren’t as daunting as possible. This might be why when Kinski speaks directly to the camera for one of the only times in the film, he refers to the “fucking, stinking camp.” Bodies are crushed, caked in mud, thrown into unwinnable situations, and treated like cogs in a self-destructive machine, but Herzog’s vision prevails, as it must. He is the artist, these are his dreams, and if failure dooms the project, he alone must answer to the suits and more importantly, himself.