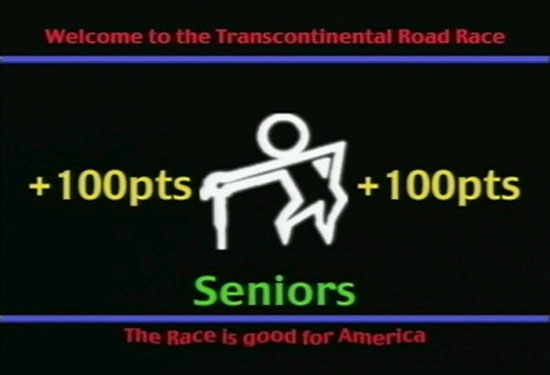 Written by Ib “Nose Pain” Melchior, Robert “Rolled Up Dollar Bill” Thom and Charles B. “Higher Than You Are” Griffith

Jonny and Mike von Hobart watched a movie together…

Mike: Dude!!!!!!!! The part where they are all bringing their cars up to post before the race and Stallone pulls up and curses the crowd, calling them lousy sons of bitches! He stands up, pulls a machine gun from the back seat, and opens fire on the fucking crowd!!! It’s rad. So, you really wanna do a joint review? I mean, there’s not much to review except just talking mad shit about it and how over-the-top cool as fuck it was…..

Jonny: That’s what we’re doing, dipshit. Yes, Stallone murdering strangers rules, but not as much as when Stallone puts it in reverse and kills him own mechanics… for 40 points!! Oh yeah, so like in the Death Race 2000, points are awarded based on who you kill. So, like, you get 10 points for a man, 20 for a woman, 40 for a baby, and 70 whopping points for an elderly person!

Mike: If I remember correctly, you get 100 points for “feebs,” or disabled people.

Jonny: Oddly, I checked and Matt Cale was only three-years-old when Death Race came out. 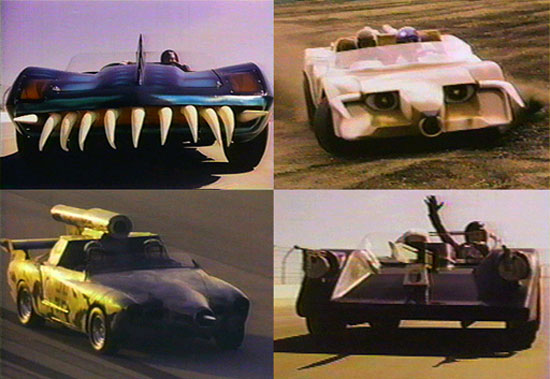 Mike: Had I been in the race, I probably would have wanted to go out of my way to run over, impale, and mangle as many disabled folks as possible. Also, the hospital has “Euthanasia Day,” where they wheel out human vegetables and the terminally ill, setting them up in the middle of the road for eventual slaughter. However, the best novelty death (in any movie I’ve ever seen) is when Stallone chases down the fisherman, runs him over, and peels out on his head, kicking up waves of bloody water!

Jonny: Yes!!! Peeling out on his head was mesmerizing. But you are forgetting that Frankenstein — yes, the main character is named Frankenstein — elected not to run down the elderly and the infirmed on “Euthanasia Day,” and instead he pulled a fast one and took out all the fucking nurses!

Mike: Oh man… that was beautiful.

Jonny: What about the giant foam Rambo-knife that was grafted onto the front of his car? I mean, his car had two Tommy Guns and an overgrown survival knife mounted to the hood! Nowadays those weapons would be popping out and shit — or not even working at all — not so in Death Race 2000. He actually uses his Tommy Guns to run people over!

Mike: Let’s not forget the quick-time filming in many scenes. I seriously think there was a scene–I was rather stoned mind you–where they actually used miniature remote controlled models of the cars. Some of the backdrops were the worst I’ve seen in any movie. And by “worst,” I mean fucking awesome!

Jonny: The whole Benny Hill nature of the car chases were off the hook. I’d like to redub the movie and put Benny Hill music to it. And what was up with the music anyhow? Like, during David Carradine/Frankenstein’s and Stallone’s big fight, they were playing soft-jazz. What on earth? 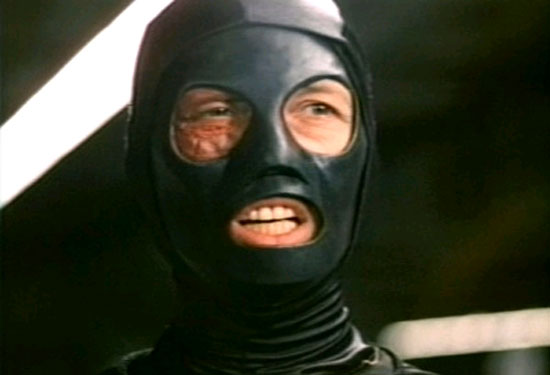 Mike: Yeah, the score was totally unprecedented. When Stallone was running down the fisherman, they had disco-funk bumpin’. And now that you mentioned it, that fight between Stallone and Carradine is among the most bizarre and unbelievable I’ve ever witnessed.

Jonny: Exactly–Stallone was so obviously not fighting very hard. Dude… what about the Nazi chick!?! I mean… So, there’s this car driven by “Matilda the Hun” and both her and her co-pilot are wearing German World War One helmets with swastikas on them… and she mutters stuff like, “I have the final solution to the Clamity Jane Question!” Unreal.

Mike: It was unreal. I honestly, at times, couldn’t believe what I was watching. I was half bewildered and half dead from laughing so hard, literally slapping my knees in disbelief. Let it be known that the Nazi chick had huge numbers of fans in the crowd, waving mini Nazi flags-and some of them were black! You brought up a good point in wanting to know how much coke was consumed during the filming of that movie. It must have been mountains, fucking mountains….

Jonny: How much cocaine? Dude, if there wasn’t a worldwide coke shortage in1975 I will be SHOCKED. Seriously, we’re talking as much or even maybe more coke than Zardoz.

I can see the pitch:

“So, (sniff), we have this national race across the country — it’s totally satire about the oppression of the man and shit — and like, uh, you know… they have to kill people.”

“Thanks — SSNNOORRTTTT — No man, just like five. Five racers. Five is all we need cause then we can really focus in on the different personalities.”

“Totally — Snort, snort taste lick — like each racer can represent a different part of the country. Nazis and southerners and… an Italian guy. And we’ll put David Carradine in a black vinyl jumpsuit with a cape and a gimp-mask–he can represent Washington DC.”

“Yes, yes, yes, like, uh… fuck, where’s Eddie? After this eight-ball and the next eight-ball, we’ve only got two eight-balls left! Call hookers.” 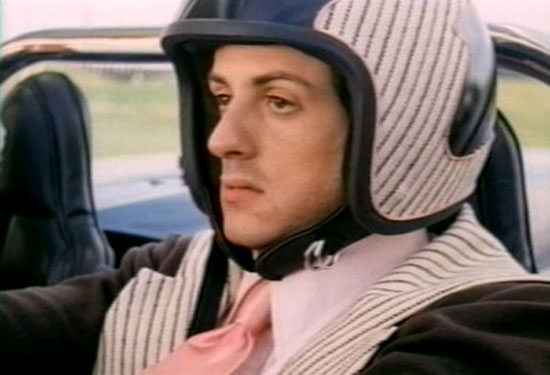 Mike: That little dialogue you just wrote needs to go into the review as is. Fucking perfect. You should just post this flurry of emails as the review…. Anyway, there is a whole network of underground anti-race fanatics that attempt to botch the cross-country excursion with booby traps, fake road-props, and even landmines. Ultimately, it comes down to Stallone, the enraged womanizer/woman-beater vs. Frankenstein, the Zen leather-daddy. And why does Frankenstein feign his own injuries and wear a mask? Like, what?

Jonny: Are you on crack? That’s the whole point of this email exchange–to post it as a review.