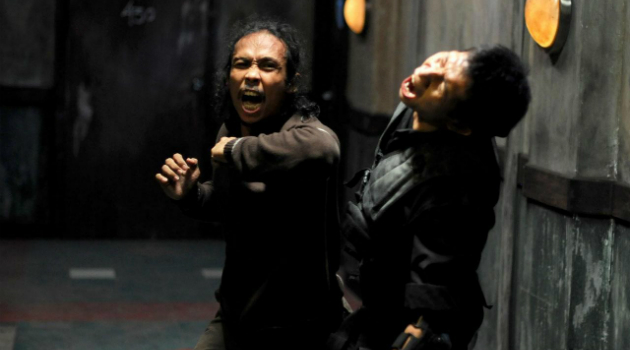 If Gareth Evans’ hyperkinetic Indonesian import The Raid had not been the handiwork of shifty foreigners, it would be a perfect candidate for the 80s Action canon. The plotline is moronic in its simplicity: Cops Must Brave 15 Stories of Machete-Wielding Thugs. There’s a decidedly fascist kill-’em-all approach to crime fighting accompanied by plenty of Stupid Political Content, consisting of various interchangeable characters railing against police corruption; a Stupid Chief Lieutenant, a soaring body count that approaches triple digits, and most importantly, dozens of sweaty, well-built athletic men thrust into intimate close-quarters combat with one another, grunting and gasping and grappling moistened bodies with enormous phallic knives thrusting in and out of orifices, lubricated with enough bodily fluids to saturate the gutters of Jakarta for weeks on end.

There’s a lavish surplus of Novelty Deaths to go around, too. Men are body slammed face-first into splintery wooden planks, contorted into unnatural forms after having their spines shattered, thrown out of high windows (landing on rusty fire escapes several stories below), stabbed in the larynx with shattered florescent light bulbs and burned to a crisp by exploding refrigerators, to say nothing of the dozens who are shanked, strangled, or shot in the face repeatedly at point-blank range. Even an unarmed child gets a bullet in the throat and a gooey slow motion death scene. What’s more, the action is lovingly staged without the faintest hint of Paul Greengrass Seizure-Cam to nullify the dedicated work of countless Indonesian stuntmen or sully your appreciation of their efforts. While there’s nary a witty quip to be found, The Raid makes no bones about its single-minded dedication to grisly violence.

All of this seems tailor-made to appeal to the less judgmental part of me, but suffice it to say I was not drunk and did not have the foresight to smuggle a bottle of rotgut into the theater. As the film wore on, dispatching the majority of the cops with carefree ease and leaving only the inhumanly skilled “rookie” Uko Uwais with his lightning fists and lethally efficient blade skill comparable to a food processor, I began to feel more and more like I was watching highlights of a video game, and less and less like I was watching a narrative unfold. The Raid isn’t one of those next-gen games with 30 minute cut scenes and impossibly convoluted storylines, it’s more of an early 90s side-scrolling arcade brawler.

Most of the action sequences consist of Uko strolling down a corridor with goons obligingly popping out of doors one or two at a time and being dispatched just in time to be replaced by two more goons, ad fucking nauseam. Seeing as how they have an obvious strength in numbers, wouldn’t it be more prudent to coordinate their efforts and surround him? If you were one of these thugs, and you were fortunate enough to have a gun, wouldn’t you try to claim the free-rent-for-life bounty by being stealthy and shooting Uko in the back, as opposed to running into the hallway with gun arm extended, screaming your retarded ass off and giving him a perfect opportunity to break your arm like a breadstick? Shouldn’t the Final Boss, with his wall of monitors surveying the entire building, be able to figure out Uko’s location and send all his men into one or two floors and hit every room at once, as opposed to sending a single underling to methodically search them one at a slow-ass time? While this provides a humorous attempt at suspense, any tension that could possibly be wrung from this material is undermined by the fact that the protagonist is a fucking human Cuisinart who can withstand cartoonish amounts of punishment.

There is never a sense of danger instilled, never a sense of urgency or a feeling of escalation. Sure, Uko is literally escalating up the building’s crumbling stairwells, but any stakes that could be raised by introducing his brother in a baffling plot twist are deep-sixed by the characters’ nonexistent personalities. We know nothing about our protagonist, other than that he is a Muslim, has a pregnant wife, and is in peak physical condition. These facts alone are not reason enough to care about whether he lives or dies. We know even less about his brother: he’s been in the gang for six years and he’s about to be an uncle. What little could be gleaned about their relationship during this single confrontation is through purely expository dialogue. Every scene that doesn’t involve spewing arteries has been chopped to within an inch of its life in favor of relentless forward momentum, just like the cursory “story scenes” between levels in any given arcade game.

The Raid blows its load prematurely during a seemingly never-ending battle in a soundproof torture chamber lined with steel, a locale more than a little reminiscent of the flamethrower execution room in Don’t Go in the House. While the endless technical displays of pencak silat are invigorating for the serious martial arts practitioner (marvel at how the combatants switch between various disciplines without apparent effort, going from using bladed weapons, to a fluid form of kickboxing involving use of and extensive damage to elbows and knees, to brutal compound-fracture-intensive grappling at will), by the time you’ve witnessed Face Punch #500 or so, things begin to feel more than a little monotonous. There’s a plot twist telegraphed from about 10 minutes in and an anticlimax that would incite genuine rage in an audience that wasn’t already in a stupor from an hour and a half of mind-numbing carnage. No bonus points if you guessed that the corrupt police department might actually be corrupt.

I should have bolted for the exits the minute Stupid Lieutenant informed Uko that they could not call for backup because “It’s a Secret Raid!” So if they called into HQ anyway, they would have been told to go fuck themselves and have fun getting hacked apart by machetes? What about calls from tenants in the building or neighboring high rises? The fucking teeming pile of dead cops on the sidewalk wouldn’t have been sufficient to alert innocent passers-by that something was rotten in the city of Jakarta? What about the father/son sniper team, introduced with much pomp and circumstance to the pulsing strains of the atonal synth score, who decapitate two cops and are then never seen or heard from again? In a video game, such shit can easily fly by the wayside, but writing this sloppy is inexcusable even in a brain-dead action movie. How I longed for the narrative panache of Cadillacs & Dinosaurs.