Written and Directed by Stephen Chow

I love this film. At certain times of the day, Kung Fu Hustle
is exactly everything you want from a movie. Now, I qualified that last
sentence because sometimes I feel like watching more political minded
cinema, like Dr. Strangelove or Patton. Other times I seek more gritty, personal-saga style works, such as The Barbarian Invasions or House of Sand and Fog. Still at other times I crave scathing, philosophical commentaries on the modern world, best embodied by movies like Bring Me the Head of Alfredo Garcia or Bring it On.
That said, there are times when I want nothing more than to be bathed
in sheer entertainment, and Stephen Chow’s delightful new
Action/Adventure masterpiece, Kung Fu Hustle delivers exactly that. 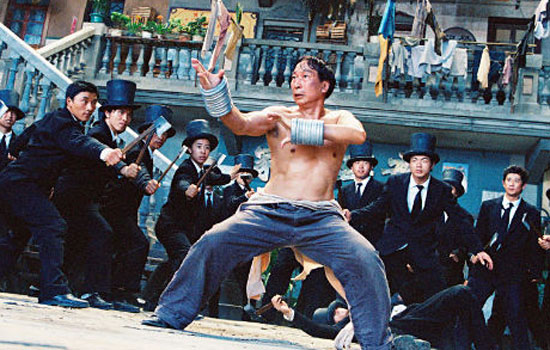 The film starts out with the ridiculous and inherently funny “Axe
Gang” asserting itself as the supreme bad asses in whatever province of
China they happen to live in. They slaughter a rival gang (with axes)
and when the girlfriend of the dead gang leader pleads for her life,
the leader of the Axe Gang (Brother Sum) very causually lets her go.
Two seconds later he shoots her in the back with a shotgun. How do they
celebrate their victory? With intense choreographed axe dancing!
Duh. We then meet the denizens of the “poorest housing project” in all
of China. They are lorded over by a philandering Landlord and his
cruel, cheap, chain-smoking wife. At one point a kid is trying to
shower in the central plaza and the water is turned off. When he
complains to the Landlady, she only slaps him and doubles his rent. And
when she catches her husband covered in lipstick, she tosses him out of
a fourth-floor window in a scene that is honestly the best use of CG I
have ever witnessed. He lands on his face and then a pot falls on his
head in a homage to the Looney Tunes so hysterical, complete and pure that I am still amazed. 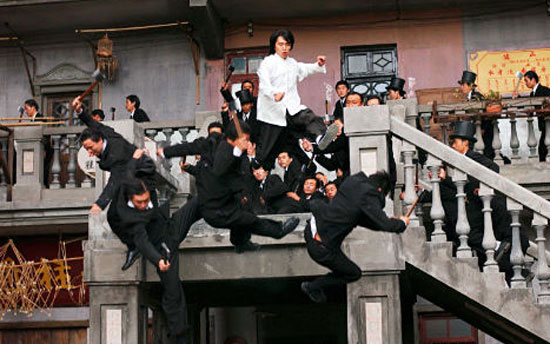 Do to a particular deceitful mix up, the Axe Gang shows up and
wants kick everyone’s ass in the housing project. Turns out that three
of the complex’s residents are super-duper stud kung fu dudes. One guy
(Coolie) is just strong as fuck, one guy (Donut) not only owns the
noodle shop but is a master of six-sided pole-fighting, and the third
guy… I really need to pause and explain that Tailor (the town’s
tailor) is the most original character in the last ten years of cinema,
easy. He’s the tailor and he’s gay–red underwear and everything–and
he’s tougher than all of them. His weapon consists of twelve stainless
steel shower curtain rings that he wears like bracelets, allowing him
not only to block axes but to seriously break faces. Any one of them
could have beaten Neo to death within seconds, leather turtleneck or
not. Within a few minutes the three of them dispatch with the totally
out-gunned Axe Gang. So, Brother Sum hires these two blind musicians
(who are actually two of the world’s deadliest assassins) to kill the
three uber-kung fu dudes. Which they do (it was very sad to see Tailor
go), but then we learn that aside from this one dude (we’ll get to him
in a minute), the Landlord and Landlady are actually the best kung fu
masters in China. After they dispose of the blind killers, the two are
asked by the other residents why they didn’t fight when the Axe Gang
first showed up. The Landlady explains that they didn’t feel like
fighting. When one of the tenants reminds her that “with great power
comes great responsibility,” she slaps him and triples his rent.

Enter “The Beast.” Man.. did I mention I love this movie? The
Beast is the number one kung fu dude in the land. But he spent so much
time perfecting his kung fu that he went nuts. He keeps himself locked
up in a mental hospital because he can’t find anyone worthwhile to
fight. The Axe Gang (sort of) breaks him out and when the Beast hears
of the two challengers, he is totally excited to fight them. Now, I
need to explain the penultimate fight scene for you, visually. The
Beast is about sixty-five years old. He is dressed in shower slippers,
boxers and a wife beater. His glasses are crooked and unkempt doesn’t
even begin to describe his greasy hair. Meanwhile, the Landlord and
Landlady are dressed like you might if you were your grandparents and
you suddenly had to go to Boca Raton for a timeshare convention circa
1966. Stretch pants and polyester shirts made exclusively from the
green, yellow and white color pallets… And they fight in a casino! It
was simply the funniest and most enjoyable fight scene I’ve seen since
Arnold tears the Glendale Galleria a new asshole in Commando. And what’s so great about Kung Fu Hustle
is that the finale, while not as totally ridiculous, is nearly as good.
I mean, when “The One” (told you this baby was self-aware) takes off to
the sky like Superman, er, I mean, Neo, he inexplicably steps on an
eagle! Blah, blah, turns out “The One” is the Landlord’s kid and as
they watch him beat up on The Beast, the father decries that he truly
is “The One.” To which the mother answers that he’ll hopefully make a
great doctor or lawyer, or more likely, “a stuntman.” 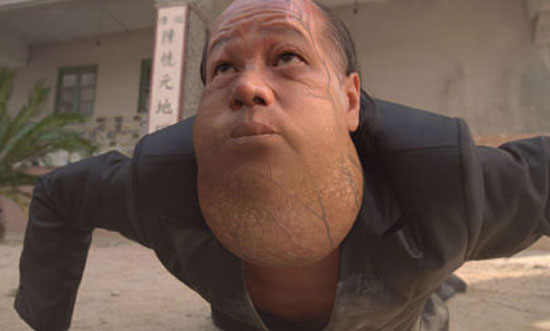 For reals, this shit is dope. And fun. Go see it.