Jonny would like to think he’s a tough Jew…

Let’s be honest. Knockaround Guys
is sabotaged for all intents and purposes by it’s cookie cutter and
uninspired script. Also, the need/necessity/studio mandate to keep the
movie under an hour and a half long further served to sell the actors
short. Aside from the above and a predictably obnoxious and lousy
soundtrack, Knockaround Guys was OK. I’ve seen worse.
I’m not giving this movie a pass, by any means; it’s just that I was
sort of interested in the give and take happening between Brooklyn’s
young-set Mafioso and the low-down small-town folk of Montana —
culture clash that was more than just dumb-ass teen movie jokes about
rednecks. Of course everyone but the two main guys die in the end as a
result of a Tarantino style “We’ve all got our guns pointed at each
other — whose going to accidentally shoot first, triggering a massive
and unnecessary blood bath?”

Barry Pepper stars as Matty Demaret . He’s the son of Barry
Chains (Dennis Hopper) a major Brooklyn underboss. When Matty is 12
years old his uncle Teddy (Malkovich) leads him into a basement where a
guy is tied up. This guy sent Matty’s pop to prison. Uncle Teddy hands
little Matty a gun and tells him to decide whether this guy lives or
dies. Being a fucking 12 year old, Matty can’t bring himself to pull
the trigger, even after Uncle Teddy (lamely) cuts the guys tongue out.
This of course becomes the crux of the entire movie. “You
couldn’t shoot that guy in the basement when you were twelve, and as a
result you can’t shoot me now.” Except Matty (of course) does shoot
Uncle Teddy in the end, thereby becoming a man, etc.

See, Matty is pretty screwed up. He can’t get a legit job as a
sports agent because of who his father is, and he can’t be a hood
because he failed that test in the basement when he was 12. His friends
are all pretty much dorks. Seth Green is Marbles, a pilot, who screws
up the modest job Matty’s father decides/relents to give Matty and his
“crew.” A bag with $500,000 in cash goes missing in Montana. Marbles
had to stop to refuel and there were these cops there so he put the bag
down and these two stoner baggage handler kids get a hold of it because
it isn’t tagged and, well, hi jinks ensue. 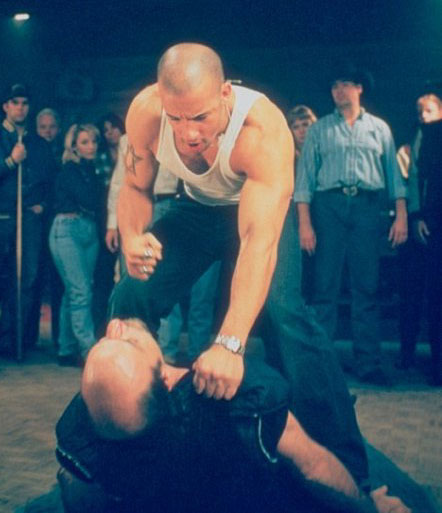 The only really good part of the movie is when Vin Diesel beats the living shit out of the guy who played Waingro in Heat.
Diesel’s character is Taylor, a Jewish thug with an enormous Star of
David tattooed on his even more enormous bicep. Unlike Matty, Taylor is
a hardened, well, not killer, but, tough guy. Yeah. He’s really fucking
tough. Like Matty, he can’t ever really make it as a mobster either,
because he’s a Jew. Some of you might find the idea of a tough Jew
laughable, but I know a guy who’s also got a Magan David tattoo (on his
back) who could rip Diesel’s guts out. Maybe it’s a recessive gene
going back to the Macabees, but every once in a while you run into a
tough fucking Jew. I knew another guy who was the arm wrestling champ
of Brooklyn. I saw him pick up the back of a car once. Granted, it was
a Camry, but still… Taylor is fairly interesting — sort of the
warrior philosopher. [Ed Note: Contrast this sober, near-stirring
performance with the new Diesel. Oy Vey]
He’s the only person in the movie besides Pepper who actually took the
role seriously and doesn’t have in tongue in his cheek the whole time.

Malkovich must be strapped for cash. He just coasts right
through this role, calling on his enormous reservoir of spooky tough
guy talent to get him through the motions. Worse than his performance,
which was actually just flat and uninspired, was the plot line
surrounding Uncle Teddy. At the very end, there is a twist (yawn) and
it turns out that Teddy has been screwing over Matty’s Dad this whole
time. The problem is that we are never given enough a back-story to
understand how in the hell Teddy could double cross Hopper. Or why. He
just sort of does it to move the plot along and provide the requisite
and seemingly mandated “twist” ending. Of course, in the hour and
twenty-four minutes the director (or should I say, studio) bothers to
give us, Teddy is clearly not a man of his word so the twist was more
of a line-dance. I saw it coming, and sadly, didn’t care when it
arrived. 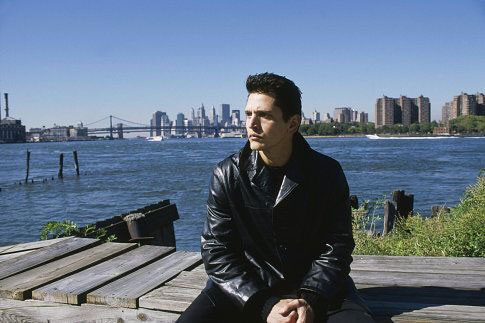 To sum it up, with the exception of Pepper and Diesel, Knockaround Guys
plays like your typical mob spoof written by some asshole at a
Starbucks in Brentwood on his laptop who has never even bought pot off
the street let alone done anything “organized.” Hopper is way too
inherently comical to play a ruthless mob boss. Malkovich is basically
Sideshow Bob but without all that humor. Green is an annoying little
midget of an actor and scores about a one as a tough guy,
cokehead-hood. I’d literally be more scared of one of the Culkins in a
street fight. At least they don’t look like they’re smiling when they
are supposed to be smirking. Tom Noonan, who plays the sheriff, is
almost convincing, but in the end he just points a gun at everybody and
gets shot. Too bad, cause Knockaround Guys had potential.

Fun Fact: This movie sat on the shelf for two years and then when
Pepper and Diesel had big hits coming out, the studio dusted it off.