It’s always a nice surprise when you blindly grab a movie off the shelf at the video store and it turns out to be compelling, interesting and enjoyable. It probably helps that my video store is the greatest in the world (Jerry’s Video on Hillhurst and Franklin in Los Feliz), but nonetheless Kitchen Stories is exactly that sort of film. Smart, playful, sometimes cruel, but never for the sake of cruelty itself, and finally kind — in a way that only a film which rails against the horror of loneliness can be. Filmed in Norway by a guy named Bent Hamer (really) and starring
dudes who I have never seen act in my life, Kitchen Stories was truly a wonderful surprise.

Here’s the set up: In the mid-1950s, a Swedish research team is “observing” how women use their kitchens. A group of “observers” watch the women cook and clean and make note of how many times they walk along the same path. Their goal is to build the most efficient kitchen possible for women. Having achieved that goal, they now want to figure out the most efficient kitchen possible for single men. To accomplish this, half a dozen or so observers attach trailers to their Saabs and
head to a frozen northern outpost in Norway populated almost entirely by single lonely men. Here comes the good part.

The observers are not allowed to talk to or interact in anyway
with their “clients.” All they are to do is sit in the men’s kitchens, perched atop these highchairs–like what tennis judges sit in–and make diagrams of the men’s movements, etc. It’s just totally absurd and really basically pointless; hence the brilliance of social democracies (put a sock in it, Wardo). We meet Isak, one of the crankiest old men in the history of film. The only dude I can think to compare him with is Osias from Eu Tu Eles. I wish I could think of a more well known example of the type of curmudgeon I’m talking about, but I can’t think of any. It seems that in American films, old-farts have to always be comical. Like Grandpa Simpson. Here in Kitchen Stories, Isak is just a dick.

The guy observing him is Folke, a seemingly buttoned-down Swede who patiently and methodically recordes Isak’s every move in the kitchen. Or tries to at least, for the old man will not play ball. Isak starts cooking all his meals on a stove in his bedroom, so all Folke gets to see is the old man smoking his pipe. This goes on for weeks. Also of note is the fact that every time Isak leaves the room he shuts the kitchen light off, usually while scowling. If he manages to leaves the room without turning the light off, it is almost guaranteed that a
second later an arm will pop back through the door and flip the switch. Folke just has to sit up on his high chair and wait. Even better, in my opinion, is the fact that Isak drills a little hole in the floor and begins observing and taking notes on Folke! There’s a particularly snarly scene when Folke jumps off his perch to grab some salt for his egg and puts it back in the wrong place. When Isak finds out his salt has been fucked with, he gives Folke the Norwegian equivalent of the evil eye. Really more of a haggard, frigid, whale-killer eye. 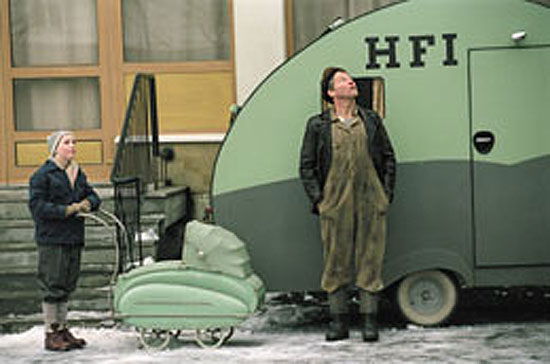 Eventually, and of course, Folke gets Isak to leave the light
on. The old man is out of tobacco so Folke throws him his pack. Sure it violates the rules, but the old man would have to walk to town and it is freezing out. Eventually the two become fast friends. Close friends, even. This is much to the dismay of Grant, Isak’s only link to humanity. First of all Folke is a hated Swede. Second, Isak is all Grant has, too. One thing I oved about the film is how the Sweden vs. Norway rivalry gets played out and dealt with. For those of you have never traveled to or had any Scandinavian friends, everyone hates the Swedes. They just hate them. The Danes have a great expression for describing Swedish folks, which I will translate here, “The Swedes who come to your home and piss on your fence.” I spent some
time in Hellsingborg, Denmark, and it is like one mile from Sweden by ferry. I guess the beer is like 50% cheaper in Hellsingborg because boatload after boatload of Swedes would come over and buy beer by the palette. I’m not kidding; there were five liquor stores next to the dock. Forklifts and everything. And the Swedes I did run into were drunk motherfuckers. Not that the Danes aren’t a bunch of drunken
bastards themselves, but anyway…

The film starts with the Swedish team of observers crossing the border and having to drive on the wrong side of the road (I guess at the time Norway was right-hand drive). Folke’s boss, a good Swede named Malmberg, has to pull the car over because he so nauseous from driving on the em>wrong side of the road. Obviously, the man is just
expressing his feelings for Norway. Moreover, the single men in the Norwegian town are trying to watch a film explaining what the kitchen observations are all about. The projector breaks and Isak mumbles, “Swedish piece of shit.” When Folke and Isak start talking to each other, Isak says that Swedes are the perfect people for this job since they “observed World War II.” Later on, Isak picks up a pack of Swedish tobacco to repay Folke. Grant is dismayed when he sees the old man has made such a purchase. I don’t know why, but I have long been fascinated by these seemingly harmless sibling feuds. Like the Flemish hating the Walloons so much, or the Austrians hating the Hungarians. And even though it can blow up into a Rwanda-style machete massacre once in a while, when it is just a bunch of clever insults back and forth it cracks me up. Needless to say, over some good Baltic herring, Folke and Isak are able to get their differences ironed out.

Obviously, the central theme of the film is not tribalism.
Rather, it is about the fascinating–almost loving–relationship that develops between a hardened old misanthrope and a bright eyed younger man. I am going to go ahead and call their relationship “sweet” in the best sense of the word. For it is a relationship that all of us should be envious of because it is one of acceptance. One of the finest scenes in recent memory is when Folke and Isak celebrate the elder’s birthday, apparently for the first time in years. All they do
is eat cake and drink bourbon, but it just so absolutely heartfelt and full of joy that you almost feel compelled to stand up and applaud. Various forces conspire to drive the two men apart, but the friendship they form, in the end, is stronger. Well, sort of. Rent it and see for yourself.