THE KING OF COMEDY

Martin Scorsese’s unsung masterpiece is one of the most misanthropic films ever made, the equivalent to a nasty, unforgiving (and continuous) slap in the face. Every single person we meet — from Robert De Niro’s Rupert Pupkin to Jerry Lewis’ Jerry Langford — is an egomaniacal bastard; even the man of the street is a self-absorbed lunatic who will wish cancer upon you if you don’t do his bidding. Sandra Bernhard’s Masha is shrill, delusional, and obviously insane (as you’d expect). At one point, while “dining” with the kidnapped Langford, she strips down to her undergarments and announces, “I want to be black.” In the context of the film, we know exactly what she means. In this world, everyone wants to be someone else; self-hatred is sold cheerfully by the yard. Even Jerry’s passive-aggressive assistant (played by Shelley Hack) has so much contempt beneath the surface that it wouldn’t surprise us to learn that she boils infants in acid on her time off. Scorsese’s world (courtesy of a savage script by Paul D. Zimmerman) is entirely closed off from reason and simple decency; people scheme, plot, maneuver, and attack, never once considering the feelings or needs of others. Fame, success, popularity — all are ends to be coveted, yes, but for these folks, they’re seen as a birthright. If I’m not famous, someone’s keeping it from me, and I’ve got the self-proclaimed talent to prove it. Never mind that no one, especially Rupert, possesses a shred of competence; it’s enough that he wants it. And if the powers that be don’t see it his way, he’ll break the law to get it done. Ain’t that America?

Let me skip ahead for a moment. One of the most brilliant touches of the film is the conclusion. Any way you read it, it’s an indictment. After Rupert kidnaps Jerry and, as ransom, asks that he be put on Jerry’s late-night program, he gives the single worst stand-up routine in the long history of comedy. Yes, even worse than Jackie Mason or Sid Caesar. He’s mind-blowingly awful, stammering through inane recollections of childhood and observations that might pass muster in a mad house. From what we see, however, the crowd eats it up. After being arrested, Rupert secures more fame than he ever could have known, and has a book deal to boot. Or does he? Given that we see numerous fantasy sequences involving Rupert’s warped frame of mind, these final scenes could easily be pure fiction; Rupert’s last gasp while rotting away in a jail cell. Still, if it is meant to be taken literally, we are raked over the coals, as what sort of people would make a simpleton like this famous? Taking a look at our current pop icon chart (the Sisters Simpson, the Sisters Hilton, Hilary Duff, Britney Spears, etc.), we’ve arguably taken an even lower road since this film’s 1983 release. I’d like to believe that Pupkin did make it big, as it would support a much stronger cinematic vision — yes, everyone will indeed be famous for fifteen minutes, and the more repellant you are, the better. It’s the triumph of the lowbrow writ large. 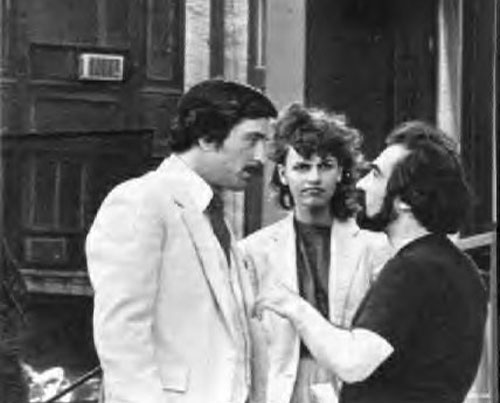 De Niro’s performance is one of his best, mainly because he inhabits nearly every frame, yet is so creepy that we want him to go away each and every time he appears. There’s never a doubt that he’s in his own world; that small, dank prison of the mind where even he’s a hip dresser, a smooth wordsmith, and instinctively charismatic. He’s none of those things, of course, but like so many who dot our sick landscape, he’d consider contrary opinions fightin’ words, and he’s not above putting a bullet in and through all contrarians. It’s a tale as old as time, right? The disappointed and rejected nerd who takes it out on the rest of us for being born without a purpose. Hell, none of us are destined for anything, but only people like Rupert grow violent when answers aren’t easily found. Either that, or they turn to the tonic of the alienated — religious devotion. Clowns like Rupert are, in fact, the truest believers of them all; taking others at their word to such an extent that when an ultra-famous celebrity says “Call me later,” he’s not trying to extricate himself from an uncomfortable situation, but actually asking you over to his summer home. But don’t mind the locked door, just break in and bring enough chutzpa to stay the night. Rupert’s mind is so literally inclined that he’s like a naive child; truth seems so sacred and absolute that areas of gray aren’t even possible. So when Rupert is told that he should “send in a tape,” he takes that as an invitation to be a guest. Why not a co-host?

In many ways, The King of Comedy is the twin sister of Nashville, where America is a wide-open amusement park of talent-less drones seeking their moment in the sun. They’re pathetic, yes, but endearing in that they’re yet to be jaded enough to see the writing on the wall. No, rather than meaning “no,” is just another way of saying “try again,” and of course with more force of will. As such, eventually we’ll all get our record deals, book tours, and hosting gigs. We all have so much to say, after all, and these airwaves belong to us, do they not? In that sense, I don’t loathe Rupert, nor do I damn him for his dreams. He’s so typical as to be dirt common. And I certainly don’t mean that one needs to waltz past a casting call or watch hours of American Idol to visualize the average Rupert. He’s in the next cubicle, or at the game, or even in your living room. Hell, you may be that guy. As a mass, we’ve been afflicted with the disease of narcissistic desire; pay attention or else I’m coming after, well, someone.