I’ll tell you right off the bat, I enjoyed King Arthur a whole hell of a lot more than I was expecting to. Penned by David Franzoni of Gladiator fame, King Arthur is not a bad film. Now, it is not a great film and even “good” seems to even be pushing it a bit, but it is not
bad. By any means. Sorry, Doc. Standing on historically shaky ground,
this film shows the struggle within King Arthur the man between his
allegiance to Rome and the papacy vs. his love for the people of
Britain. I should mention that the only Brit he meets who he does not
slaughter (this is a violent film) is the ravishingly delectable Guinevere (Keira Knightly). Given that she seems to represent all of England, I’d be torn, too.

So yeah, King Arthur is half Roman, half Anglo and his band of
knights are actually Samarians who were enslaved as youths and stolen
from the steppes of the Black Sea to become fearsome Woad-killers
(Apparently “Woads” are Scotsmen). So, right off the bat, King Arthur
is probably the most hated movie to come out in Britain since
Australian model George Lazenby strapped on the toupee to play James
Bond. How historically accurate it is, I will leave to amateur
historians to fight over; for me, it was an interesting if not slightly
insulting story. Insulting only insomuch as part of me is from Britain
and, well, it’s like saying the Queen is descended from Germans. Most likely true, but man… it sucks. 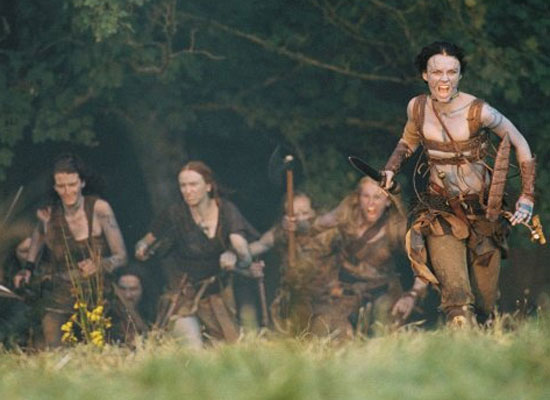 The deal is that the Samarian warriors (the Knights of the Round
Table) are to be lead by Arthur for fifteen years and then set free.
Not helping any of this are the casting decision to have Arthur
portrayed by Clive Owen, a man who is way older than the twenty-five-year old is supposed to portray (he’s thirty-six). Moreover, an insanely sexy
looking Ray Winstone is not only supposed to be about mid-twenties
(he’s nearly fifty) but he is supposed to be foreign born. People,
Winstone looks as if he was extracted from a cave in
Nottingham–specifically a cave called The Inn of Jerusalem. Worse though is the fact that Arthur is already–before
he unites all of England and becomes king–a living legend. Both of his
main adversaries–Stephan Dillane’s Osama bin Merlin (I stole that…)
and Stellan Skarsgård’s Cedric–spend much of the film muttering
“Arthur” under their breath and regarding him as if he were a god. And
the guy is twenty-five? Lazy screenwriting like that really pisses me
off. It is every bit as asinine as Lucas casting a four-year-old to
play Anikan in The Phantom Menace. Dear screenwriters; we’re not that fucking stupid! All you had to do was write “twenty-five years later” instead of fifteen…

Anyhow, I forced myself to get past the above idiocy and once I
did, I was left with a beautifully filmed movie with lots of bloody
battle scenes. Director Antoine Fuqua seems to have an uncanny knack
for portraying the inherent beauty of battle. He did it in Tears of the Sun and he does it again here in King Arthur.
My only gripe with the sets would be that many of them looked too new;
too fresh. Now, some dork out there is going to say, “Jonny! This movie
is set in the past, so shit that is old now was new then.” Fine, except
that fully fifty percent of the movie takes place around Hadrian’s
wall, which was built in about 120 AD. Also of note, is that a quick
Google search turns up that Hadrian’s Wall was abandoned by the Romans
in 383 AD and this film takes place in 467 AD. But why split hairs?
Point is everything looked good, especially the ice-battle. Only, does
it get cold enough in Scotland for frozen lakes and snow-capped
mountains? Again, no matter. 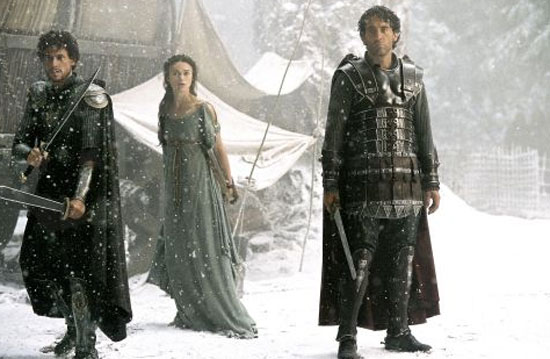 And the ice-battle was the shit! So, for a whole variety of
reasons, Arthur and the Knights are evacuating some Romans from an
outpost north of the wall. They have to make an end-around to the east
cause the uber-Viking Saxons have flanked them to the south. They get
caught on this frozen lake in a mountain pass and they decide to stay
and make a stand against the pursuing Saxon Horde headed by Cedric’s
son Cynric (Til Schweiger, who is sporting a goatee stolen from the
guitar player of Rob Halford’s old band Fight). It is seven
Knights and the deadly Guinevere against about a hundred men. OK, in
the film she is supposed to be deadly, but seriously, Knightly is so
fucking hot what Arthur should have done rather than use her for battle
was to have her walk into the enemy camp and simply tell the Saxon men
“no” when they ask her out. All hearts would be broken. In Guinevere’s
defense, there is a really funny line where she tells Lancelot that she
won’t let any Saxons rape him. Anyhow, Roman technology was apparently
much better than Saxon and the Knights are able to shoot quill after
quill of arrows into the enemy, while the Saxons’ projectiles fall
short. Cynric makes his men advance; only as they do they notice the
ice is breaking. Arthur instructs his Knights to shoot at the flanks,
forcing the approaching Saxons to huddle up, which puts even more
strain on the ice. Cynric is no dummy and he commands his men to stay
in formation. The ice will not break. So, this big fucker Knight runs
forward with a battle-ax and begins beating on the ice with all his
might. The ice gives and the ensuing pandemonium is beautiful in its
savagery and bleakness. I mean, what’s more satisfying and solemn than
dozens of drowning Vikings? 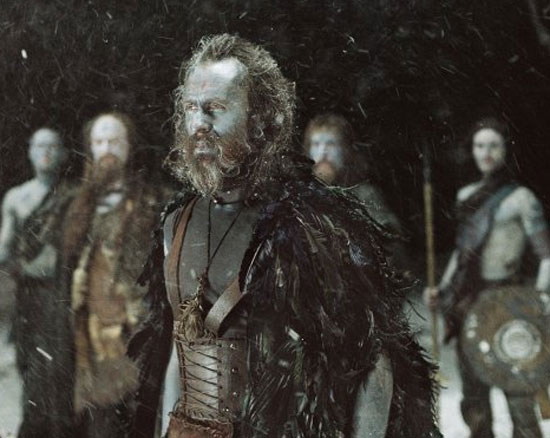 To conclude, yeah, I know this is a Bruckheimer picture but he
just isn’t his usual pig-fucking self. Fuqua is too strong a director.
Still, the story tended to plod along at times and the dialogue
is totally inane (luckily it was super easy to tune out! Seriously, I
think every fourth word uttered was “freedom”). Still, the actors
themselves were all quite strong and the action was almost non-stop.
Not that I am a huge fan of epic battles, but it was refreshing to see
actual humans getting chopped to pieces rather than computer
animations. Yeah, I liked Braveheart better than Troy.
The central issue here, loyalty to ideals vs. loyalty to formality is
an interesting one, but like most “blockbusters” only passing lip
service (mostly in the form of every other character screaming, “FREEDOM!!!“) was paid to any philosophy. King Arthur
is all about mass killing and Keira Knightly’s beauty. And, like, you
know, it’s not the worst way I could think of to spend two hours.