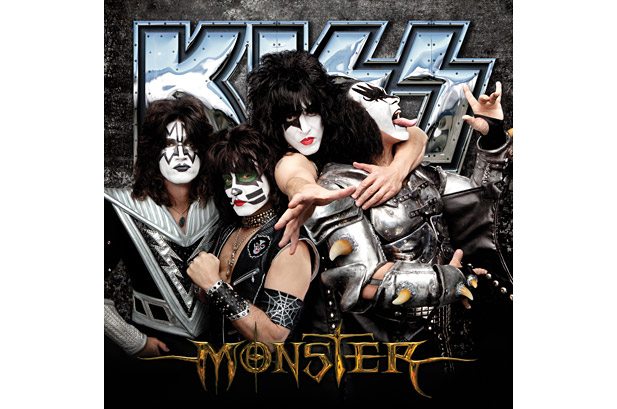 Ever since I can remember, Ive wanted to be buried in a KISS coffin. Depending on mood or the state of my ever-deepening virginity, said burial need not have occurred post-mortem, and more often than not, I simply wanted the damned thing around as a reminder of where I could be if the fates remained hardened and unkind. I never did visit with one face-to-face, nor has my fantasy gone beyond a brief, fuzzy glimpse during some random television appearance, but I always imagined the coffin being the ultimate in rest and relaxation. Surely Gene Simmons  profit-obsessed, crass, and uncompromisingly miserly  would still insist that the KISS Army (his KISS Army, if were being frank) spend eternity is plush, silk-laden satisfaction, even if the tunes of an era played nevermore. Or maybe there was a sound system inside, pounding away the best of Love Gun, Animalize, or Alive II for a good year or so before the inevitable decay set in. Would there be room for the Destroyer Boots of my choosing? That is, if I were so inclined to insist on fashion immortality? Were there secret drawers, fur-lined pockets, or compartments for assorted KISS loot, up to and including KISS condoms? No sense in not getting the deluxe treatment, even at death, and as adolescence turned bitterly into adulthood, my fascination remained ever-present. Mind you, I had (and have) no idea how much one of these fool things would set me back, but above all, I could ensure that my graveside service would remain a topic of fevered discussion, at least through my sparsely attended memorial. Surely I deserved a break after once spending a good month defending Hot in the Shade. 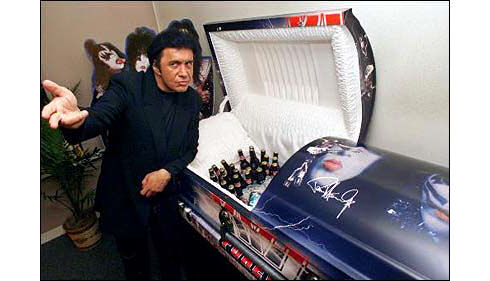 And so we get from there to here. From KISS coffins and bad albums to the scripted drama of an A&E series and even worse albums. From marketing genius to marketing abominations, where suckers like me drop a few bucks to bear witness to yet another perfunctory effort from octogenarians in clown makeup, even if the powers that be stopped counting the loot long ago. Are there otherwise rational adults in a similar bind? Those who know exactly whats coming, yet willingly steel their souls for the barrage of mediocrity? Here, in 2013, having just celebrated (okay, paused briefly to acknowledge) my 40th birthday, was there any reason under the sun to purchase, open, and pop on a new KISS record? After all, had I not given the lowly Ratt another chance after last flirting with their inanity in the early 90s? Sure, I listened to their newest CD but once, and only remember it now because I believe the liner notes mentioned the death of an original band member or something, but was I not the ultimate creature of habit? A man so sadly devoted to days gone by that I actually cared what Simmons and Stanley hath wrought? I cannot tell you why I got Monster, why I listened to it, and why it remains in my car to this day. Will there ever come a time when it feels right? What state of mind will demand its insertion? Some songs take us back, conjure up fondness or pain, or even keep the world at bay. Music is arguably the one exclusively emotional medium, and yet what emotional gash would ever, in a thousand lifetimes, require the salve that is KISS? Was it simply a matter of bad taste?

Whatever the motivation or the cause, Monster remains the most forgettable release in the history of the band. Not the worst, for the worst would have at least been memorable, but the one disc in a 40-year history that has no reason to exist. Easy to say after Smashes, Thrashes, and Hits or that one foray into disco, but here it is at last: KISS Waterloo. Or, to be fair and accurate, their Auschwitz. I know what youre thinking  did it really take until 2013 to produce the one KISS record youd be ashamed to have in your tricked-out coffin? Yes and no. No, in that I have no doubt a strong case could be made for any one of KISS seventy-nine records being the ultimate affront to music, culture, and the American Way, but an emphatic yes in that at long last, I finally stooped to care. Am I maturing in my tastes at last? Embracing nuance, subtlety, and aural complexity as I face wrinkles, obesity, and pain? As I continue to strum my steering wheel whenever I hear Flight of Icarus or that Orleans tune that, then and now, sounds like the opening credits to a 1981 sitcom cancelled after four episodes, I am a self-described buffoon when it comes to the musical arena. I like Dylan, Elvis, Sinatra, and CCR, but Im not above perking up to Saxon or Boston, either. I tap along to classics and carnage, anthems and ass-splitters, and if someone like me finally makes a break with KISS, the world sure as shit better listen. This is serious business, this long-delayed burial, and if Matt Cale says a KISS record sucks balls, lock it in as fact. Our orbit around the sun couldnt be any more scientifically sound.

Theres been a debate in certain circles  okay, only on Ozzys Boneyard on Sirius, and even there, only from Eddie Trunks name-dropping lips  as to whether or not KISS warrants Rock N Roll Hall of Fame consideration. Until now, I had always felt that it wasnt the quality of the music so much as the cultural impact that determined induction. I mean, KISS had little classical talent, but they took the nation by storm in the 1970s, and even had their own movie. A shitty one, but a celluloid testament nonetheless. Did they not perfect, if not invent, the bombastic, overwrought concert experience? They spit blood, crapped fire, and did everything humanly possible to distract the audience from noticing that a guy dressed as a cat was bringing your girlfriend to tears with the eras most appalling rock ballad. That these idiots made a great living producing swill should be rewarded in some fashion, right? Or is it enough that they are rich beyond the dreams of avarice? Now, however, its all different. And it took Freak to make it happen. This particular song  track #3  claims, with complete unironic detachment, that the kid with streaks in his hair is the national martyr of the moment. People point and stare and this youngster, as if its 1959 all over again and national fiat dictated a marginalization of the odd. Here, in 2013, when gay marriage is all but accepted nationwide, and no one save the Amish are attempting to beat back the truth that sex, drugs, and ineptitude won the day, KISS heartily roars that its a genuine cross to bear to be the sort of person who dances in the streets and doesnt care who knows it. Yes, rock music has always been an ode to rebellion, but these guys collect Social Security and we long ago stopped singling out kids in parachute pants and dog collars.

So I guess the kids still need to know that Paul and Gene respect their courage to be independent, but how on earth does an album with twelve indistinguishable tracks accomplish that purpose? Maybe its Back to the Stone Age, where KISS insists that to be truly free, one must continue to rage for the ladies, even after the ball sack appears more pendulum than house of demon seed. But the whole world drives Gene insane, so I guess hes entitled to some respite. No one works harder to ensure they wont have to work hard. And if any doubt remained by the time you reached Shout Mercy, Gene was there to tell you that he wants to get a little crazy and make a little ecstasy. Im pretty jaded at this point, and perhaps cynical beyond redemption, but not even I want to spend any amount of time hearing about Paul Stanleys penis. Sure, its far past the time when I should have seen the damned thing, but the songs done played out. At least both men end the tune with a plea that they dont want anyones sympathy. And then they hit Long Way Down, which is one of the few contemporary tunes to still equate gypsies with good sex, though it escapes further scrutiny by acknowledging that when one beds down with such a person, its always on a bed of lies. Even the battle-tested Eat Your Heart Out limps along, generating no heat in images of shattered backbones and sparks a-flying. Gene even tips his cap to the fatties, blurting, You give me pleasure like a big girl should. Yes, we now live in a world where Gene Simmons has admitted a fupa fetish.

As the disc drones on, Gene admits that, perhaps, he is in fact the devil, and that if youre feeling all alone, fucking is the only way out. So sex is a cure for alienation and loneliness.I guess were never too old to acquire a new pearl of wisdom. Cue up the foot-stomper that rock and roll is our salvation (still?), sex the ultimate high, and that no wedding ring should ever be a barrier to screwing backstage. In the end, though, Take Me Down Below is still about sex on an airplane, Last Chance still about living life to its fullest (like fucking on an airplane), and Hell or Hallelujah, natch, ends up siding with hell. I wanted to care, but couldnt. Wanted to shout, but went mute. Wanted to rock, but rolled over and went to sleep. Its over, guys, and god help you all if you release anything else. Im just in the mood to take you out. Worst of all, poof goes the coffin dream. I hate the sight of it now. Pity that after all this, Ill have to choose cremation.