Consider the matter settled. Forget the YMCA, your average fraternity, spontaneous games of touch football in the park, or even the Ruthless Forum: the U.S. Marine Corps — born, bred, and shaped for the single purpose of sniffing out life, reacting with heartless efficiency, and ending that same life without regret — is the single gayest gathering of the male species the world has ever known. In fact, the homoeroticism is so overwhelming that it becomes instantly clear the sole motivation for joining the Corps would be to spend long periods of time in the presence of equally sweaty, ruggedly shirtless men; not killing for king and country. These horny, hardened young men sleep together, bathe together, wade through the mud together, and, when danger rears its ugly head, shout each other’s names with the force and passion of a jilted lover.

During those moments when they aren’t putting expensive ammunition into the skulls of the godless, they hoot and holler in cultish covens that, at their core, are devoted to the flawless beauty of the male form; more specifically, the mighty phallus of the bloodthirsty warrior. Cocks are grabbed, exposed, released, unfurled, and thrust about with abandon. More importantly, they are given names; personalized so as to lend an air of intimacy to the proceedings. Chests are oiled, thighs glisten, butt cheeks shimmer, and marble-like abs drip with the hard-earned dew of a thousand battles. Death itself, while feared, is tempered by the realization that within the bowels of their brethren, they can return to their own quiet innocence; a sacred sanctuary of longing and fulfillment, where existential terrors are breathlessly transformed into ejaculatory releases of the damned. 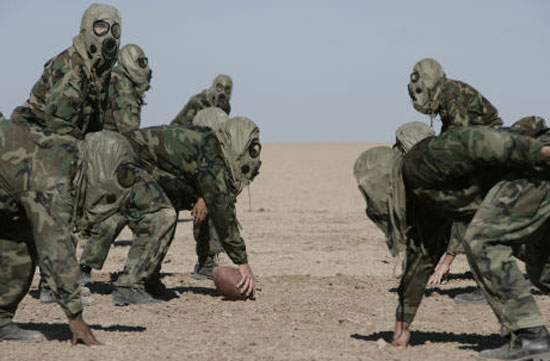 Coupled, of course, with the strut-filled preening and holy rolling of majestic sausage, is an unmistakable misogyny; a hatred of women so deep and refined that it becomes as instinctual as breathing. Females, though often objectified and seemingly the target of lustful gestures, represent weakness, apology, and regret, as well as a home front that can never be embraced in the same way again after the flesh-feast of combat has released the inner demons of same-sex attachment. Hearth and home (as well as civil society) keep homoeroticism at bay with rules, regulations, and a code of masculinity that punish overt displays of gayness. In the Corps, however, only loyalty to one’s “unit” — in both senses of the term — is of any practical importance. This liberates the beast within; ushering forth a flood of figurative and literal ass-pounding that would send shockwaves through even the most ostentatious of bath houses. Those called by honor, duty, and the sting of ever-present death are, then, the best — and perhaps only — witnesses to what war teaches us about the nature of man: ending a life is the only comparable sensation to the orgasm, and both require a set of carefully shaved balls of hard-bitten iron. And when they swing, they destroy.

And so we have Jarhead, the latest from Oscar-winning director Sam Mendes, the man responsible for the equally homoerotic American Beauty back in 1999. There, a lone Marine sat unfulfilled and therefore, murderous, due to his buried longings; here, the entire institution of manhood seems at war with its own sexuality. As expected, there are towel-snapping incidents in the shower, naked dances around a bonfire, and, most blatantly, field fucks, where recruits strip down and simulate oral and anal sex with each other. Anthony Swofford (Jake Gyllenhaal), whose story this is (based on his best-selling memoir), also puts a Santa hat on his head and penis as he struts to O.P.P., which is both a sexual taunt to his fellow blue balls, but also a fuck you to the woman he left behind, who he knows is cheating on him. So while we have men worshiping at their own altars, we also witness the contemptuous attitudes towards those they claim to love, if only for the sake of tradition. They might be bored, scared, and distracted while overseas, but they couldnt imagine being anywhere else. After all, one is literally surrounded by strapping hunks that would die for you at any moment, which is more than can be said for the cheap whore back home.

All of that aside, Jarhead is a curious document of men-at-war in that traditional forms of release — the big battle, for example — are denied to both the soldiers and the audience. These men want to fire their guns with every fiber of their being, yet all of their training is wasted on silly drills, preparation, and waiting around for the killing to begin. That they achieve release through masturbation and hazing rituals reinforces every point made about the sex/death connection, even if the theory is overly familiar. And thats the central dilemma to Jarhead, after all: nothing revolutionary occurs, yet throughout, we get the feeling that this is no ordinary exploration of wars tedium. After all, if we take what we see at face value, there is no conceivable way that we could respect or lionize these men, for even if they do not kill before our eyes, they remain remarkably ignorant, simpleminded, and one-dimensional engines of testosterone. From their arrival at Camp Pendleton, through their boot camp training, and up to the moment when they are shipped out to the Middle East for the first Gulf War, they perform exactly as expected. Theres an asshole drill instructor, orders being barked from every corner, forced push-ups, tight green t-shirts, and the exchange of family pictures. If youve seen a film about the military, youve been over this ground before. And yet, perhaps unintentionally, the clichéd aspect to these scenes speaks to a deeper issue about the nature of the fighting man. Why, for example, is he so easily transformed from raw recruit to cold-blooded assassin? Moreover, why — knowing full well what to expect — would anyone subject themselves to this truly extreme makeover? The film avoids issues of class, race, and politics, so all were left with is the obvious (and original) point: homoeroticism is a mans primary comfort zone. Jobs come and go, chicks are unreliable, and civilian life is unpredictable and usually uninspiring. But the mighty cock is always there. It never lets you down. 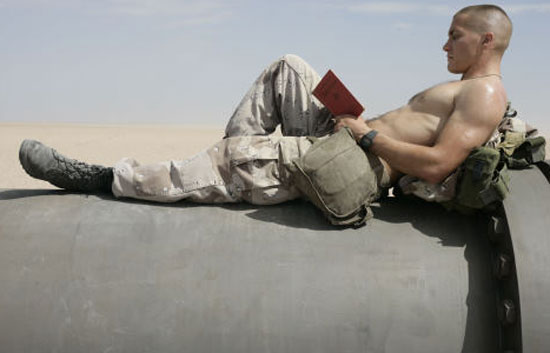 When the film shifts to the desert, it often plods along with obligatory scenes, but at the same time, were taken aback by the lack of forward momentum. If were bored, imagine the soldiers lot, when he was quite literally expecting the mother of all battles. Of course, we have the typically diverse group — a cracker, a dipshit, a Negro, a Mexican, and some Irish dude (we know this because he proudly displays the Irish flag) — but the film doesnt try to give each of them their own story. We get a few tidbits from home (Troy, played by Peter Sarsgaard, has a criminal record, we soon learn), but nothing that forces us to swallow yet again the shopworn idea that were all in this together. For one of the few times I can remember, the lack of strong character development worked because, frankly, I dont give a shit about these people anyway. They are cannon fodder, and by willingly putting themselves in this position, I can only stand back and cackle with derision. What else can be said about dimwits who cheer Apocalypse Now like its the Super Bowl? And what would I learn, anyway? That Bubba cant read or write, or that Jimmy never felt whole until he joined the Corps? It seems best that we not complicate these people too much, and the film wisely chooses to direct its attention elsewhere. Fine, we are viewing this through one mans eyes, so the voice is not entirely detached, but Swofford doesnt go to the trouble of digging any deeper than is necessary. Here I am, he says, and this is what I saw. Were he to inject politics into the equation, it would have been laughable.

Mendes does manage to craft two remarkable sequences, one of which involves the infamous Highway of Death. The carnage is presented matter-of-factly, without the usual emotional cues to guide our tear ducts, and it also appears this way to the soldiers themselves. Swofford does vomit after walking over a hill and finding some particularly gruesome corpses, but we can just as easily believe that this was due to the stench as any assumed moral outrage. Swofford isnt a witness to the inhumanity of war (at least not in his own mind), but rather the pungent (and literal) odor of death. In other words, hes not about to take on the cause of pacifism when he returns to civilian life. Hes a proud Marine, and this is what one encounters on daily rounds. If anything, he regrets not being the one to have caused the poor sots bitter end. After all, what sense is dying if there isnt an immediate and identifiable cause? And these people died after being torched from the skies; an act that has none of the satisfaction of a personalized, face-to-face kill. Perhaps that is the lament of the modern fighting man: remove the heroics and grunt work of war, and all youre left with are the dehumanized tactics of the machine. The second sequence of note is after the oil wells are set on fire, and the skies are blackened by smoke, soot, and falling crude. As the oil covers the men and soaks the sand, it is a powerful image of what these men were actually risking their lives to protect, only to watch millions of barrels waste away into the mist. More than that, their blackened faces are a hilarious contrast to the red splattered faces of other wars, where the men would have given anything not to fire a shot, instead of breaking down at the absence of slaughter.

And as fervently as the film avoids partisan wrangling, it does manage an ironic laugh near the end, as the men celebrate sans clothing after being told that the war is over. Firing their guns in the air and cheering for the simple fact of being alive, one young man states, Well never have to come back to this desert again! Little did they expect that the coitus interruptus of Iraq I would later become the full-fledged fuck of Iraq II. The son cleaning up for the old man. The bulging hard-on pushing aside the flaccid cocktail weenie. Whatever turn-of-phrase you choose, it involves, as expected, male cocksmanship. Whether its men releasing their wads on the first available recruit after failing to see the pink spray (as they call it), or boys playing circle jerk with their washed-up dads, warfare is intercourse by other means, especially when those involved have no other way of finding an identity. For a nation that claims to be the home of so many devoutly religious human beings, it remains a curious fact indeed that they continue to seek meaning through alternate channels. Normally, I would applaud this push away from God, only its not a fitting substitute to want to play him.