There’s only one thing that matters in a film like this; do we get to see Jessica Alba’s tits?

Yet again, the powers-that-be have decided that the only possible reason for ANYONE to see this crap–a hottie’s melons exploding in full-tilt THX–would be removed in favor of ensuring a larger audience for that all-important opening weekend. In other words, we’re treated to a sanitized PG-13, no real violence of any kind, and of course, only respectable cleavage, which simply won’t cut it when I’m asked to endure two hours of this deafening bullshit.

He is, which is only slightly better that Captain Meanie or Doctor Danger. And we know he’s the bad guy because he holds creepy board meetings, lusts after the chick we know is meant for the shy (but hunky) scientist, and is so vain that he insists on a massive statue in his honor. In a move of surprising innovation, he becomes enamored with his new powers and seeks to control the world through sheer force. 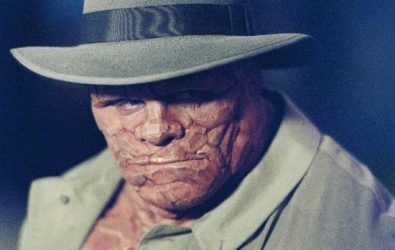 These “powers,” as you call them…..how were they acquired?

Our Fantastic Four–The Thing, The Invisible Girl, The Human Torch, and Mr. Fantastic–become who they are after they encounter a molecular storm of some kind while conducting research for Von Doom’s corporation. The storm alters their DNA and they can, in order, exhibit great strength, turn invisible, become a fireball, and stretch like rubber. Needless to say, the storm in question is based on dubious scientific principles that fly by so quickly and with such confusion that it becomes clear we’re supposed to accept it on faith. And of course, this event must be followed by a counter-event, which involves the construction of a “great machine” that will reverse the process and return our heroes back to normal. However, because a sequel is guaranteed in this case, the foursome rejects the machine and decides to, uh, fight crime or something. Whatever it is, it promises to be excruciatingly dull. And I’ll be there.

And there’s a coda, right, where the Doom dude isn’t really dead?

I saw “The End,” but of course there was a scene that followed, apparently to show that Doom would be back for another round. I couldn’t tell you how exactly, as I rushed from the theater in the hopes that I could beat the crowd to the parking garage. As tempted as I was to listen to the audience members carry on about how “frickin’ awesome” the whole thing was, I got a sense of their collective opinion during the film. The bearded bikers behind me said “wow” or “cool” at least a dozen times each, the family of nine ahead of me was so impressed that you would have thought that they were witnessing Christ himself coming down from the cross, and the guffaws often reached laugh track levels of joviality. Me? I sat impassively, occasionally scanned the audience, and began to slump down, hoping I could find a warm place to hide my pain.

This may be difficult, but what qualifies as the Single Dumbest Scene you witnessed?

I could be clever and say “the one that transpired between the opening and closing credits,” but I’ll play fair and be more specific. The Thing (known as Ben Grimm when not a freakish rock creature) is saving a suicidal man on the Brooklyn Bridge, which leads to mass chaos and the sort of traffic accident usually reserved for fog-shrouded highways, and the arrival of emergency crews, as well as the other members of the Fantastic team. Again, there are hundreds of stalled cars, hundreds of bodies cramming and jamming for elbow room, and flame and twisted metal for all, and yet Ben’s wife manages to show up at the front of the crowd and set down her wedding ring, signaling her retreat from a relationship that once meant everything to her, but now cannot work because her husband is literally made of stone. It’s bad enough that she managed to make it through the sea of wreckage, but I ask you–how on fucking earth did she even know that her husband was at the bridge to begin with? If she saw it on TV, she still would have had to drive through the heart of New York City in less than five minutes. Does this really matter in a film where we are asked to accept a man who heats popcorn in his hand? I say yes, for dumb is dumb, even in a film based on a comic book. 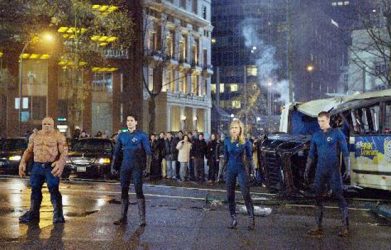 One could argue he was on hand to perform some wacky bike stunts that would wow your average red-stater, but let’s face it–no other opportunity presented itself to feature product placements en masse. I counted Burger King and Pepsi as the most obvious, but have since forgotten the dozens of others that littered the arena. That fact should trouble the companies that spent millions to feature their products, but as this is easily one of 2005’s worst movies, they’ll be happier in the end to avoid any connection to such a travesty. That said, boycott Burger King and Pepsi. Forever.

You mentioned The Thing….didn’t he end up with a new chick after his wife left him?

I thought I had seen everything, but yes, the rock creature ends up with a blind woman he met in a bar. Moreover, there’s actually a scene where she rubs her hands all over his body and pronounces him a fine catch indeed. The ick-factor was sealed when they walked off at the end flirting shamelessly and exchanging sexual banter. Just roll your eyes and keep moving.

It probably doesn’t matter, but what exactly is the story here?

The Fantastic Four become afflicted, come to terms with their powers, and wait around until Doom decides to get rid of them so he can take back the company that let him go. TWO FUCKING HOURS this shit took, when a brisk 75 minutes would have been more than enough. And I thought Catwoman’s “killer skin creme” angle was lame… 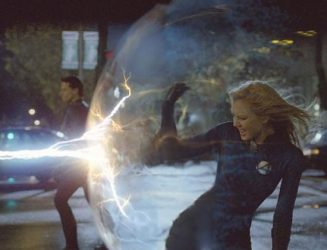 Back to Alba–did she really play a scientist?

I’m out of wisecracks here, as it must be accepted that if a hot chick will be cast in a summer blockbuster, it stands to reason that she’ll portray something way out of her range, which leads to embarrassing dialogue aplenty, and an obligatory scene where she puts on glasses to remind us that, despite the tight abs, delicious booty, and heaving bosom, she can so say intelligent stuff. And this reminds me: the “glasses moment” never occurs while the chick is scantily clad. She could be half-naked, sweaty, and delightfully whorish for 99% of the film, but when she reaches for those frames, she’s magically buttoned up like a prune-faced librarian, with a tightly wound hair bun to match.

Oh, did you hear that this piece of ever-loving shit made $56 million in its opening weekend?

It just came over the wire, friend, and I’m not at all surprised. And so my appeal moves from the muttering stage to a dull roar: if Al Qaeda is looking for new targets, I beg them to consider the average middle-American multiplex. Imagine for a moment a world where, in an instant, thousands of lost souls who CHOOSE to spend the precious minutes of their lives staring helplessly at a screen that projects swill like Fantastic Four, are removed for all time? Would the birds not chirp a little louder? The air not seem a little crisper, even cleaner? The possibilities not seem endless?

But wouldn’t you also be a casualty?

I’ve been gone for years, man. I’m just waiting for the night.