The Door’s Ray Manzarek: Eulogy for an Organ Player

Ray Manzarek is dead, 74 years ain’t bad, but cancer…I’m sorry that’s how he had to go. May that he is infinite now.

Ray Manzarek was the songwriter. Morrison was the lyricist. Morrison gave the songs of the Doors the direct empathic heft, the dizzying drop into a fever dream of bohemian revelation. John Densmore provided the jazz influence, and Robby Krieger’s flamenco guitar gave the tenor melodies a dexterity absent on most mid-60s rock. But Manzarek fleshed out the sound into a symphonic summer wave that was unlike anything else in 1967.

It’s hard to listen to the eponymous debut of The Doors and realize just how much it changed everything, when everybody was adopting that sound six months later. But rock and roll has rarely again sustained such an exquisite tightrope between daytime desire and night-time terrors.

Of course everybody is going to focus on Jim Morrison. Just like any conversation about X-Men steers to Wolverine, or talking about classic SNL goes to Jim Belushi rather than Dan Akroyd. The wild men do that. They get attention.

But without Manzarek, Morrison would have been a hot mess. At most, a fascinating poetic figure of 60s psychedelica. Not the icon of America.

Every Dionysis needs an Apollo. Every enfant terrible requires an elegant man. Manzarek’s sweeping and lingering rhapsodies of the electric organ opened a world for Kraftwerk, Neu, and Yes to explore, one that would lead to the rise of modern electronic music.

Manzarek was a pioneer of the multiple keyboard array. Before him, keyboardists would usually have just one organ. Manzarek would alternate between a Fender Rhodes and a Vox Continental. His wide, glowing chords and arpeggiations did as much to define the psychedelic sound as Lou Reed’s guitar.

More than that, he defined what a keyboardist should look like as a stage presence (well him and Stevie Wonder). That prim focus, the racks of equipment encapsulating him like a cage. He was both a perfect complement and contrast to the gyrations and explosions of Jimbo.

My friend Ross turned me on to the Doors at the same time that I discovered Nirvana. Before that, I didn’t much care for rock music- fifth grade was Phillip Glass and Geto Boyz. Nirvana may have been the ugly awkward side of puberty. But the Doors was the promise, of women like maenads and strange days and crystal ships, wild loves riding the desert. It’s easy in this age ruled by cynicism to forget the spiritual power of indulgence. Who still seeks, or even believes, in widening the doors of perception? Who longs now for erewhon, in these Kali Yuga days?

I am unashamed to say that the Doors have been an overpowering dream in my life. To achieve that shamanic purity, that freudian intensity, that raw psychological power- I’ve been smitten with the legend of that band for my life. There are better expressions of l’artiste monstreaux (Morrison basically lived the longest performance of Brecht’s first play, Baal) but Morrison is still the first name that I go to. A potent dream- the delusion that poetic genius could be a substitute, could be a metamorphic force, a pathway to apotheosis.. I was always a poet and a singer and a shouter. But when I heard the Doors at the age of 12- that’s what made be want to be a poet, not just a poet, but the best poet of the 21st century. I shall always dream of my language somehow igniting the night, as deferred and elided that desire may prove within my person.

I dreamed of meeting a person like Manzarek, with that sort of auditory reserve and equilibrium, with that appetite for baroque grandeur, unafraid of making music that sounded simply beautiful. I even hope that I am a friend to such a person. Such a friend could mean the difference as to whether I create anything of the faintest social or aesthetic value. God knows I’ve pawned a lot of job opportunities in pursuit of having a song-writing partnership that was 1/1000th as good as the team that was Morrison and Manzarek. 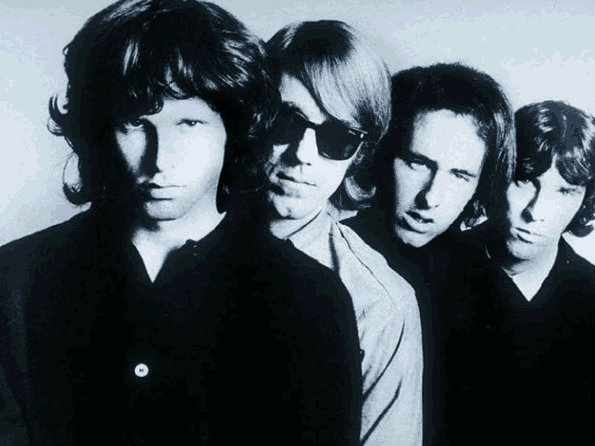 Manzarek’s legacy was not merely the Doors. He also produced and mixed the albums of X, one of the underrated fixtures of the original California punk scene, one of the closer analogues to the post-punk scene then emerging in NYC and Manchester. He also helped to produce Echo and the Bunnymen, the 1980s heirs of psychedelic music. He collaborated with Skrillex more recently. He kept working, even if he never achieved as definitive a role as he had with the Doors.

I’m sad for this world. I am sad for all the haters and trolls pissing in the comment bars tonight, so desperate for their armor of irony that they refuse to sleep a wink of dreaming in a better world. I’m sad for the people that settle for the ersatz sensationalism of Moulin Rouge instead of the rawness of music like this. I’m sad for a media, a society, a civilization, so twisted that it can no longer engage seriously with the ideals of 1967- free love, mind expansion, a reversion to a shamanic connection. That crystal ship has sailed without you or I. We are SO MUCH poorer to lack such dreams.

I cannot speak to the man. I can only speak to the music and the tremendous influence and power that it has held across the width of my life. Thank you, Mr. Manzarek. Lousy poets such as myself can only hope to flicker dimly within the shadow that you have cast.