This was the best movie of this year. Everyone else can just stop making whatever they’re making and give up. DEEP BLUE is INSANE.

If this movie had any flaws whatsoever it was this: not being 6 hours long. Some of the shots are so amazing — like being 50 feet underwater, camera pointing straight up, filming the sun coming directly into the lens, but distorted by the rippling waves — or, shots from inside the halfpipe of a breaking wave, or zooming in from a whole beach to one single grain of sand — that I could have watched them for an hour. If they made those scenes an hour long, there is the danger I would turn into someone who meditates and wears crystals. But still that is a danger I would risk, because that shit is just so amazing. Also there is lots of breathtaking nature footage, kind of KOYANASQUATTSI style, but it’s difficult to write about that using words so I will just write about the violence instead. 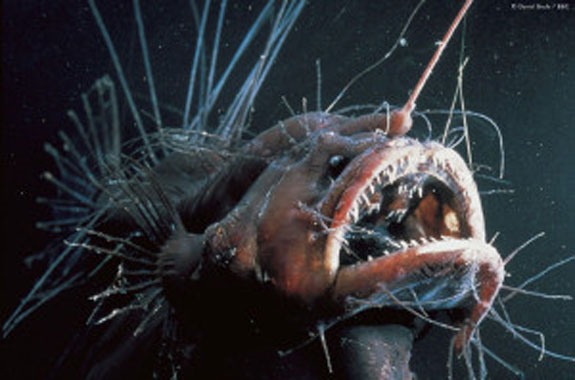 I mean, they have whale-on-whale deathmatches filmed in the middle of the ocean. What the fuck?? How do you even FIND that shit? This isn’t some cushy Hollywood director with a big SFX budget who just dials his cell phone and is like;

“Hey, is Gary there? This is David. Can you make me a whale fight? I need it by Tuesday. Let’s do some blow!”

You can’t invent that shit. You can’t buy that shit. It’s the BIGGEST ANIMALS ON EARTH and they are killing each other, and the waves are RED WITH BLOOD. What the FUCK!?!

Not only that, but they have clouds of like 3,000,393,383,387,322 fish swimming in a loop, thus making this like giant living whirlpool of solid bodies a kilometer in diameter. Then like a million dolphins and 2 million sharks all swoop in from 4 dimensions and start eating everything in sight, and these guys are all filming it from the fucking inside. I swear it was like MATRIX THREE but REAL. I kept expecting them to cut to the old general guy inside his tank going “RAHHHHHH!!!” because it was that intense AND not even made up. 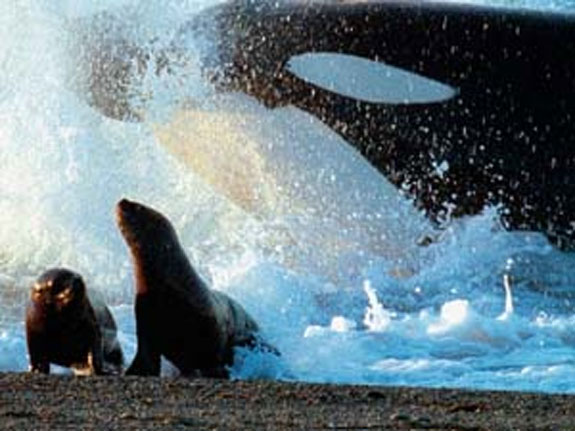 It makes me think, jesus, if that shit was the shit they DID film like no problem, all in a day’s work, what kind of shit did they see but COULDN’T film?? that thought fucks with my mind way more than any of the other boggling things that are actually IN the film…

Then after all that, it gets all calm and peaceful and it cuts to some baby seals playing on a beach. It is very nurturing and new age. They are cute and cuddly and have big eyes and they are just about to enter the water for the first time on their own. . .and then LIKE FIFTEEN ORCA WHALES FUCKING JUMP OUT OF THE OCEAN LITERALLY ONTO THE FUCKING BEACH AND JUST EAT THEM IN SLOW MOTION. I was like “Holy shit, they got Bob! NOT BOOOBB!!!!” I was like, “You guys are such fuckers for even filming this,” because they must have known this shit was going down. They must have asked the locals “Where is a good place to shoot orcas totally eating baby seals? Because we need to film that shit.”

Not only that, but - and I bet you didn’t know this — orcas play with their prey like a cat plays with an injured mouse [Ed Note: I knew that]. All throwing it up in the air and catching it. The last scene in this vignette is this: an orca getting all Harlem Globetrotters on a dead baby seal: fuckin’ USING ITS TAIL to flip the seal up in the air like easily FOUR HUNDRED FEET straight up, just spinning, entrails all coming out. . .just FUCKING INSANE.

The polar bears were lame, though.

But then they do other shit, like go to the deep sea areas and film just unbelievably crazy jellyfish with little pulsing neon lights and stuff. You have to see this to believe it because it looks like nothing you have ever seen before even in a science fiction movie with a billion dollar SFX budget.

Keep in mind that I am only praising the more ordinary, laid-back shit in this film because the REALLY interesting stuff cannot even be described in the English language. Half this film will make you want to jump on the next boat with a camera and some swim fins, and the other half will make you want to move to Kansas and never even bathe for fear of what lurks inside the water.