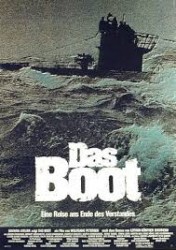 Das Boot opens with a bunch of drunken sailors pissing on a U-Boat Captain and his officers. This is no doubt a metaphorical stab at the fact that the Nazi overlords essentially sent literal boatloads of U-Boat men into the meat grinder. 40,000 sailors went out in German subs. About 7,000 came back. Even more poignant is when the Captain’s #1 is shocked by this behavior, while the captain himself just shrugs it off as part of his duty. Das Boot is not your average war movie and it sure as hell ain’t a war-by-numbers calculated pile of crap like U-571. In fact comparing the two movies is like pitting Fyodor Dostoevsky against Danielle Steele.

There is a scene towards the end of the movie where the Captain (Jurgen Prochnow) is on top of the sub, all by himself, as the boat is racing through the Straight of Gibraltar while being fired on by half the British Navy. This was at the two and half hour point. I jumped up off of my couch and began cheering. Rarely do you ever get to see a scene so brilliantly conceived, filmed and executed. The only other scene that jumps to mind is in The Claim, when Peter Mullan’s character Dillon has a large team of men and horses literally move his house across a snow covered plain in order too woo his ex-wife. But this scene in Das Boot is better.

The Captain and his crew are essentially put on a suicide mission by the incompetent Nazi naval commanders. The sub is supposed to get itself into the Mediterranean, which is completely controlled by the Allies. Showing unparalleled charisma and balls, the captain presses on. The scene is even more powerful in light of the fact that writer Lothar Buchheim went to great lengths to establish the fact the Captain and his crew, while ostensibly Nazis, are in fact just military men fighting for their country against what they see as a cruel, drunken, crippled enemy. That being Winston Churchill. I have serious doubts if U-Boat commanders were actually this benevolent, intelligent and caring, but I definitely was able to suspend not only my disbelief, but my intense hatred of Nazis for the duration of the film.

Das Boot is great on several levels. First and foremost, the cinematography is tremendous. All praise is due to Jost Vacano, the principle cinematographer. Whenever there is an “Alarm!” (When the ship suddenly has to dive and dive fast.) the submarine comes alive. The camera follows dozens of sailors as they leap into action, spinning valves and swinging though tiny little openings. Almost the entire movie takes place inside the sub or from the point of view of the men in the sub. Even in scenes where the crew encounters other vessels such as a British Destroyer or the Captain’s mentor Thomsen’s sub, Director Petersen and Vacano keep us tightly wound inside the boat – claustrophobic, wet and cold.

The “cinematic devices” Peterson employs also work extremely well. In historical pieces such as Das Boot you typically have a ton of explaining to do. Think horrid amounts of tedious exposition. Usually it is because American audiences are so horribly ignorant of anything that wasn’t on Leno last night. Petersen is faced with an even larger challenge, because most Germans in 1981 didn’t know shit about was what the hell their parents were up to during the war. Remember, this is a country that went into national psychosis when Schindler’s List hit theaters. Point being, a load of exposition was needed. Petersen handled this expertly by employing the talents of Lieutenant Werner, an SS reporter who knows nothing about U-Boats or the Navy. The 2nd Lieutenant spends a good deal of time explaining the Captain’s actions to Werner. This succeeds wonderfully by always keeping the audience in the know. Also, the two actors (Herbert Gronemeyer and martin Semmelrogge) have excellent chemistry together. Their interactions also set up the most dramatic moment of the movie as the crew watches the depth meter climb and climb and climb.

Like all really good dramas, Das Boot has plenty of ups to go with all its many downs. Lighthearted moments which showcase the character’s personalities and quirks. Unlike say Requiem For A Dream where all we know about the characters is that they are stupid junkies, we actually see the crew of the sub having fun, playing music, talking about girls and laughing. There is one really great part where a young, boyish solider gets a case of crabs. Not to give the whole thing away, but the uptight, uber-Nazi 1st Lieutenant comes down with a case of crabs in his eyebrows. All of this development ultimately serves to make the viewer care immensely whether or not the crew lives or dies. Unlike the aforementioned Requiem where all the characters were such pieces of human filth that you didn’t give a damn if their arms fell off or not. Plus the fair well party scene at the beginning made me want to get stupid drunk and attack women.

In the end, it is the performance of Prochnow that makes Das Boot not just great, but memorable and important. Not to quote Madonna, but Prochnow “gives good face.” He is the story and his range, like the scope of the movie, is vast and intense. Besides the incredible ride he takes atop the sub while trying to enter Gibraltar, there is another scene just earlier that sets it all up. See, we are already all in love with the Captain by the time he makes his daring run. Earlier however, the U-Boat torpedoed a convoy of British cargo vessels. A couple of destroyers give chase, but the wily Captain and his kick-ass sub manage to evade them. The sub goes back to survey the damage and they realize that one of the British boats is still afloat. So, they fire another torpedo at it. When the new torpedo hits, the Captain and the rest of his staff realize that the sailors had never been evacuated form the burning and sinking vessel. The British sailors jump into the ocean and begin swimming towards the sub. The Captain, in a defining moment, orders the Chief Engineer to back the sub up, away from the drowning men.

Now of course in a perfect world the dying men would be saved. All of you who want to watch movies about a perfect world go watch Pay It Forward. For the rest of you, the Captain’s cruelty is a very necessary evil, and one that he ultimately suffers for. Often in military movies, a commander of some sort will do something extreme and evil and we get no explanation as to why. In Das Boot, the Captain makes a very tough decision, but spends the next ten minutes in existential crisis wondering, “Why weren’t those sailors rescued?” The part that wasn’t spelled out for the viewers is what happened to German prisoners of war, which even those of you with the most rudimentary and cursory knowledge of WWII should be able to deduce. The Captain knew that in the end, rescuing a bunch of British soldiers would be pointless, cause they would die horrible deaths anyway. Still, the Captain is human, all too human.