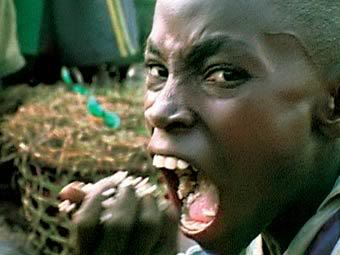 The cinematic arts are often meant to inspire, instruct, and entertain, but on those rare occasions when the mood has but one direction, they are meant to produce a level of disgust and outrage so overwhelming that its all one can do to get home in one piece. Darwins Nightmare, Hubert Saupers new documentary, is so punishing in its bleakness, in fact, that it acts as a white flag for all further endeavors. The liberal humanist in me always wants to believe that mankind might improve, or that through various political actions, despair and exploitation might be tempered with a bit of justice, but after today, I cant point to a single shred of evidence that justifies my cautious optimism. After 107 minutes of such pain, cruelty, savagery, and callousness masking itself as the laws of business, Im not sure how to approach each and every hour of the coming days; where I am constantly reminded that we in the West — fat, content, and so blissfully successful that we have to invent problems in the absence of real troubles — must either check out via the blade, bullet, or pill, or else find a way to live with hypocrisy and crushing guilt. As Ill still be here tomorrow, I know Ive made my decision (Im no saint), and Im not nearly sanctimonious enough to judge others for joining me on my well-trod path. The world suffers, whereas I do not, and Id be lying if I claimed to be doing anything real about it. That said, Darwins Nightmare is a perfect repudiation of the idea that anything can be done at all, absent altering mans essential nature. With atomic weapons.

Darwins Nightmare considers the case of Tanzania, an indescribably poor country in Africa that happens to be the home of Lake Victoria, one of the most productive bodies of the water in the world, as well as the source of the Nile. Forty or so years ago, someone (it is unclear who, but dollars to donuts it had a white face) introduced the Nile Perch into the lake, a massive fish that had no business in that particular ecosystem, except to satisfy the siren song of naked greed. As expected, the fish ate every other type of fish in the lake, destroying the delicate balance that nature had built up over millions of years. In a matter of decades, human beings, as is their lot, brought catastrophic change to the area, which seems to be of little concern to those who dont have to live there. The Nile Perch, it seems, is quite coveted by Europeans, as well as the Japanese, and flights pour in daily to retrieve the fish (after it has been prepared by grossly underpaid locals) and sell it for huge profits in other parts of the world. Capitalism at its finest, you might suggest? Perhaps, but consider this: Tanzania is in the midst of widespread starvation, and the general population, many of whom are forced to live on mere pennies a day (if theyre lucky enough to find work), are denied the very source of food that is, by all rights, theirs. Most of these unfortunate souls live on the banks of the lake, and others gut and clean the creatures, yet not a single person in the country actually gets to eat one. One may speak of markets and invisible hands until theory is literally coursing through ones veins, but it is an inescapable flaw of capitalism that a nation’s goods are wholly exported while the citizens of that country waste away and die. If thats what Adam Smith had in mind, Ill be in the corner fellating Marx.

As we watch planes take off with their valuable cargo, we are treated to gut-wrenching sights of Tanzanians subsisting on the fish waste that the factories no longer need. In a scene of nightmarish proportions, coughing, wheezing, and plague-ridden locals stomp their way through tons of fish carcasses, maggots, and mud, trying desperately to pick away some sort of meal. And yes, these scenes take place mere feet from Lake Victoria, where the water is teeming with the very solution to their woes. Not only is it horrific to imagine that human beings are forced to ingest this rotting skin and bone (theres not really any worthwhile meat), but we must also take into account the fact that these people also live among the ruins, where ammonia gas from the fish piles choke the remaining bits of life from the locals. The stench, filth, and disease are overwhelming, but this is what the market decrees, is it not? Perhaps if these Africans had not been so inept as to be born in such a region, they might have made something of themselves. And as they say, if you dont like it, pick up and move out; perhaps to the Congo or Sudan, where you can elude warlords and soldiers just long enough to be raped, after which youll die miserably of AIDS, but not before passing it on to your children.

For all of globalizations alleged benefits, it tends to be forgotten that only those with capital benefit from such arrangements. The poor and the homeless — who constitute the majority of Africa, needless to say — continue to be butchered and left to rot in the dirt and excrement. Such images leave me with an essential truth that guides my world view through each and every waking moment: In the name of jobs and economic development, the business man has committed more unspeakable atrocities than those motivated by God. The continent of Africa brings that debate to a close. That said, God also figures into the equation, as local religious figures continue to deny these people condoms because they are, in the words of one fuckwit-for-Jesus, “sinful.” My guess is that no self-described holy man ever had to eat his own vomit to survive. Okay, perhaps Jerry Falwell.

To add to the chaos, we also see planes (largely Russian, but the Netherlands and France dont escape scrutiny) bring illegal shipments of arms to the region, dump them off so that blacks may continue killing other blacks, and have fish loaded in their place. As one jaded Russian pilot states, Africans are slaughtered so that whites can move in, pick up the pieces, and make a little money for their efforts. Anyone who thinks so-called humanitarian efforts in Africa are motivated by benevolence need only look to the source of the weapons that Africans carry in their endless civil wars. The same man rationalizes his enterprises out of a predictable racism (he claims that Africans dont want to work), which should sound eerily familiar to anyone who listened to Fox News during the Hurricane Katrina coverage. So as the camera pans the painful Tanzanian landscape and we see dying prostitutes, glue-sniffing kids, and bloated infants, remember that the iron law of the jungle has spoken and fate has seen fit to dispense rewards and punishments in its infinite wisdom. And while we witness one result of mans interruption of natural selection, we also see what form of Darwinism we actually do believe in. For while we haggle over textbooks and the origin of life, we seem to take little issue with Herbert Spencers perverse vision of survival of the fittest, where those with gumption, brains, and brawn rise to the peak of their professions, while the refuse sinks to the bottom. What the West truly thinks of the African is often sugar-coated by benefit concerts and television appeals, but at the end of the day, his death is little noticed. Social Darwinism still trumps Jesus.

The film also manages some black comedy in the midst of the madness, as we are treated to a guided tour of Mwanzas airport, an operation that stretches and contorts the meaning of ad hoc beyond all recognition. Staffed by a single air traffic controller, no radar or guidance system, and only a single green light to inform incoming pilots of danger, the airport grounds are littered with the charred husks of discarded aircraft and endless rounds of maintenance. The Tanzanian man who dreams that one day his son will be a pilot shows the director pictures of planes submerged in Lake Victoria, as well as other accidents that occurred because the planes were overstuffed with their fishy cargo. How anyone gets out of this demented circus alive is beyond me, and it should surprise no one that security is non-existent, which allows for even more arms shipments to arrive without detection. Something tells me armed agents wont be patrolling the air strip anytime soon. We also meet a man who guards the fish facility at night, a risky job that earns the poor man a mere dollar a day. Still, he is quite fortunate in that the previous guard was murdered on the job, a fact that created a much-needed opening in a tight labor market. In the midst of all this, the man manages a defiant smile, as if to say, what can you do? And if he survives another night, hes achieved a small victory in a country where such things are in extremely short supply. Id argue they already left; perhaps with that first plane load of perch.