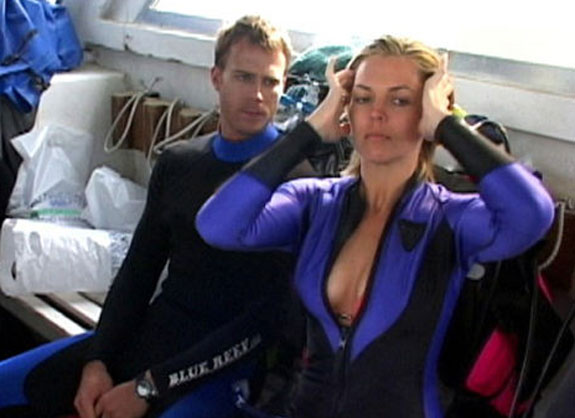 Open Water is a good film made great by an audacious ending (which I will give away). Overall, I found the film to be about as expected, perhaps even slightly less spine-tingling than promised, but the final moments were so bold and contemptuous of comforting resolution that I will recommend the film wholeheartedly to anyone who gets a perverse thrill from watching mainstream moviegoers given the finger. In fact, the surprisingly full screening I attended was visibly and audibly upset by the conclusion, which was enough to send me on my merry way with hope for the state of cinema. True, this is a cheap, grainy, independent work, and has little in common with most of the swill that floods out of movie houses these days, but whenever a filmmaker makes a film as it should happen, rather than what will be pleasing to the audience, I fall in love all over again.

Written and directed by Chris Kentis and starring Daniel Travis as Daniel, and cute-as-a-button Blanchard Ryan as Susan (whom we see naked, thankfully), Open Water is very simple, executed without a lot of psychological clutter that gets in the way of the story. We are introduced to Daniel and Susan as they prepare for a long-awaited trip to paradise, where they plan to do a little diving with a tour group. We dont learn much about these people, except that Susan is overwhelmed by work and Daniel resents her a bit for it. They appear to be a relatively happy couple, and we arent left with the impression that a tragedy will force them to confront a myriad of buried issues. Their trip seems to have been a compromise, and in bed together they seem preoccupied rather than fully immersed in their escape. That said, I believe these small, subtle details are just that — bits and pieces of a typical relationship — and dont need to be overanalyzed one bit. 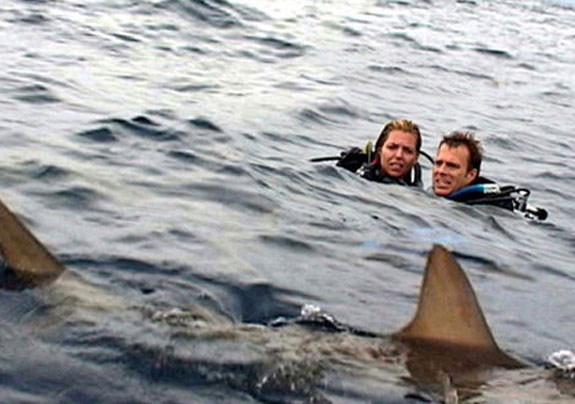 When Daniel and Susan are forgotten about by the crew (due to a miscount that seems reasonable and not at all contrived), they bob along in the vast ocean completely baffled by the situation. Their denial is similar to the pair in Gerry, in that it seems absurd that anybody could ever get truly lost in the modern world. After all, this is a vacation, and who would expect life-threatening situations on a vacation? And as the two drift along, the film cuts back to shore (and the boat) from time to time, if only to remind us that the crew is clueless until it is far too late. If anything, the film scores points by demonstrating the forced and utterly phony camaraderie of a tour group, as the smiles and high-fives of the trip out to sea are met with ignorant and uncaring silences as to the plight of the missing passengers on the trip back. How is it that no one notices the absence of the attractive couple? At the very least, Susan was a healthy set of tits to look at, which shows how single-minded these people really are. As long as theyre okay, why worry about anyone else?

The plight of the young couple is made worse by darkening skies, hunger, jellyfish, and of course, sharks. But unlike the comically fake shark of Jaws (which was a good film anyway), these are the real deal, which, along with the hand-held camera work, lends the proceedings an air of authenticity so often lacking in the thriller genre. There are no effects here, just human beings and the natural world. They share small victories (as when Susan discovers some candy tucked away in her diving suit), continue to believe that help will come, and deal with small fish who nibble at Susans legs. The pair also begins to blame the other for the ordeal, although as presented, it is less of a breakdown than the natural result of fear. This is far from an examination of a marriage on trial; it is instead two normal people who have no real idea of how to deal with a situation inconceivable to most, even those who make their life on the sea. They react, but do not overreact, in that they are not melodramatic babblers who talk about the meaning of it all as death becomes more imminent. As it becomes more evident that they will not in fact survive, they exchange I love yous, but dont bore the rest of us with talk about what might have been. When faced with the end, most of us focus on each minute of survival left to us, not carry on in a philosophical manner.

And now for the glorious finale. The film teases us with the possibility that the pair might be rescued (a member of the crew finally discovers IDs and missing oxygen tanks), and even resorts to the big mobilization scene, where we see boats, helicopters, and planes head out to sea. But Daniel has been bitten in the leg by a shark, is losing a tremendous amount of blood, and they have barely made it through a rough night. Finally, we see that Daniel has succumbed to his injuries and Susan lets him go, where he is devoured in a feeding frenzy. Susan does not panic, nor does she sob to the heavens, for at that point, she has accepted her fate. But what about the boats? Wont they find a way to reach Susan? Spielberg would have made sure of that, as would just about any other Hollywood director (we can almost see the shivering Susan on board a ship speaking about the horror of it all), but not this time. After considering the vastness of the sea, Susan pauses briefly, glances about, and plunges beneath the waves. As we pull back, realizing that Susan has ended her life before the surrounding sharks could do it for her, we also know that there are no rescue planes just beyond the horizon, nor are there any boats for miles and miles of indifferent ocean. He is gone, she is gone, and the sea continues. Its almost as if the film has said: here they were, adults full of life and adventure, who made a decision, ran into bad luck (and human incompetence), and now are no more. Once alive, now dead. No coda, no epilogue, no follow-up. And yet, it made me smile.