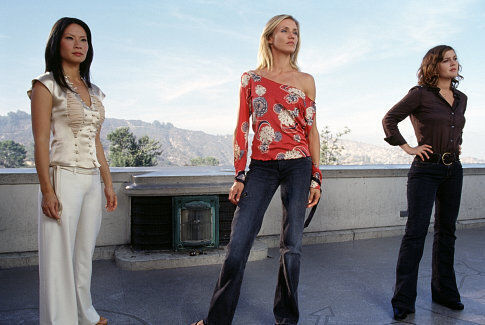 What should I expect from a movie that is directed by a grown man who calls himself McG? Exactly how many car chases, explosions, bad one-liners, and ear-splitting fight scenes should I count on from such a man? Whatever was called for, McG exceeded expectations and has delivered what can only be described as the loudest film I have ever seen. It is no exaggeration to say that not one second passes without some form of deafening noise eminating from the screen. From crunching limbs, to heat-filled explosions, to an unending hard rock soundtrack, McG has made absolutely certain that there will be no down time. Because the dialogue in a movie like this only serves to move us from one action set piece to the next, I expected brain-dead exchanges, but I certainly did not think that it was possible to have a film without even a split second of silence. Without any pauses whatsoever, Charlie’s Angels: Full Throttle is, in addition to being as obnoxious and relentless as a spurned retard in heat, as exhausting as spending the day outside in 100 degree heat. A very dry heat. Wearing a heavy wool coat.

The three Angels — Natalie (Cameron Diaz), Dylan (Drew Barrymore), and Alex (Lucy Liu) — are sent by Charlie to retrieve a set of rings that hold the identities of all those being hidden in the federal witness protection program. Apparently the rings will fetch a high price from competing mobsters who have had members put away by these people, and they are willing to spend millions of dollars to get revenge. Mixed up in all this are Irish gangsters, turncoats in the Department of Justice, the Japanese mafia, and assorted Italian stereotypes. But of course, the “plot” (surely a new word must be devised to describe what goes on in a summer action movie) is irrelevant, both to viewers and the filmmakers themselves. We are here to see stuff get blowed up real good and the Angels appear in various stages of undress. And yes, the Angels are slim and cute and athletic, but I’m not really a fan of any of them. Liu is a horrible, horrible woman worthy only of a slow death in a dank Turkish prison; Barrymore is a whiny twit who has all the sex appeal of my grandmother; and Cameron Diaz, an alleged beauty who gets less attractive the more I look at her, is a woman in need of at least three breast implants. It would be more revealing if I removed my top.

The film opens in Mongolia, and contains more mindless action in the credit sequence than most movies feature in their entirety. After being assaulted so heavily so soon, I was ready to go home and take a nap, but I knew I had to be a trooper and see what surprises McG had in store for me next. Okay, I didn’t expect a cameo from Bruce Willis, who appears for all of five seconds, utters not a word of dialogue, and is promptly shot in the head. If only all of his performances were this brief. And no, I didn’t expect to see pop star Pink act as a starter for a BMX race, which ran more like a video game than anything approaching reality. At one point, a racer in the middle of a mid-air loop stops, pulls out a gun, and fires several times at the pursuing Angels. Once his gun is emptied, he returns to his bike and finishes the race. And then there is Eric Bogosian, also appearing for less than ten seconds, and doing nothing more than portraying a dead body. It’s his best role since Talk Radio. And in a flash-forward/fantasy sequence, the Olsen Twins appeared, proving at last that America leads the world in rampant injustice when dipshits like this can amass a small fortune. I’d be surprised if these dim bulbs can even speak without cue cards. But there is more unexplained idiocy. John Cleese shows up as Lucy Liu’s father. Matt LeBlanc embrasses the hell out of himself as Liu’s clueless boyfriend. And Luke Wilson brings about a reddish flush to the cheeks as Diaz’s boyfriend. Their subplot — invloving a possible marriage proposal and the stress of moving in together — is as unnecessary as it is a fucking bore. If McG is anything, it is the master of padding the running time with worthless nonsense. And did I mention that Crispin Glover runs around as a lunatic who gets off by smelling the hair he pulls from women’s heads? Don’t ask. Please

But standing above them all is Demi Moore as former-Angel-turned-evil, Madison. Moore shows plenty of her freakishly toned body, but no amount of tits and abs can distract us from her acting, or should I say “acting.” It would be a long, exhausting search indeed to find a “star” less deserving of fame and an actress so lacking in talent. I’ve never liked her (her turn in A Few Good Men deserved a Razzie if anything did), but her turn in this film is easily the worst performance I’ve seen all year. And no, I’m not forgetting Boat Trip. Moore’s line delivery is so wooden and so artificial that even the worst teen-thing-of-the-moment would have a difficult time sinking to her level. If she’s sexy I didn’t notice or care because I was too busy resisting the urge to shout obscenities at the screen and storm out of the theater. She’s now at the top of my list of celebrities most in need of a drug overdose. Needless to say, her character is behind all of the criminal activity and yes, there is a showdown (well, several actually) with the three Angels. But not before Dylan has doubts and runs off to Mexico, only to be “saved” by an unexpected meeting with Jaclyn Smith in a seedy bar. And, by all appearances, Smith has had more surgeries than acting jobs since she left the Charlie’s Angels TV show. Dylan returns, and just in time too, as Madison has Alex and Natalie cornered at the Griffith Observatory overlooking Los Angeles. As I watched this sequence, I remembered that there was also a fight scene at this location in Rebel Without a Cause. I then thought of James Dean’s undeniable talent and a life cut short, and then focused once again on Moore’s unjust existence and continued plague on Hollywood. At these moments I cry for my country.

So yes, all is saved and the bad guys die horrible deaths (Moore, for example, is swallowed up by fire after a great fall), and the end leaves it open for the inevitable third installment. I’m guessing that there will be yet another Bosley as Bernie Mac is given little to do but shuck-and-jive, and once sober he will no doubt realize that he is needed in the annual black cop/white cop buddy cop film being thrown about in story conference as we speak. And who knows if McG will be back again, although I am hard pressed to name anything else he has ever done. Perhaps “McG” is a pseudonym, or the new Alan Smithee. In any case, a film like this doesn’t need a seasoned director, only someone willing to shout “Now blow that up….and that…..and yes, more flame!” for a few hours a day. The computers will do the rest.

And no review would be complete without a brief discussion about the crowd at the local cineplex that has given me so much fodder in the past. Alas, there were only a half dozen other patrons at my screening and unfortunately (and shockingly) they were well-behaved and remained seated throughout. I heard nary a word of Spanish and the air remained free of all cell phones and screeching babies, although it would have been hard to tell given the movie’s approximation of a war zone. But I did have the good fortune of locking eyes with the retarded ticket taker on the way out, who mumbled something I believe was “I’ll remember you too!” I don’t know what he meant — and I’m sure his diseased, half-rotten brain didn’t either — but it left me with a smile on my face nonetheless. I ignored the drooling half-wit, but life made sense again. And I welcomed the coming night.