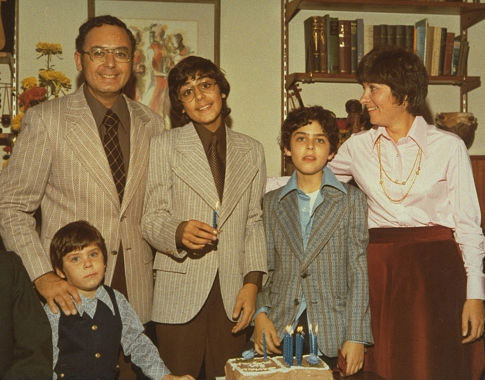 Halfway through Capturing The Friedmans I was thinking that the opening line to my impending review would be, “And you’re surprised Kafka was a Jew.” But then director Andrew Jarecki turned the tables on me. Almost completely. Instead of leaving me with a clear idea of what to think and believe, Jarecki (thankfully) left me engaged, upset, repulsed and ultimately affected. For over two hours I sat with my girlfriend dissecting every aspect of the film, every possible scenario, every piece of evidence or lack thereof, every motive, etc. Our conclusion was that the both of us were depressed and creeped out.

Arnold Friedman was a seemingly normal Long Island father. Loving, educated, a gifted high school teacher and musician – basically your typical New York Jewish dad. Then a postal inspector busts him for shipping and receiving kiddy porn. Then the sex crimes unit from the police shows up with a warrant and they find a list of young boys who are enrolled in a computer class Arnold taught from his basement/garage. Then both Arnold and his youngest son Jesse are accused and eventually incarcerated for hundreds of counts of molestation, sexual assault and sodomy. Arnold eventually overdoses on anti-depressants while in prison. Most remarkable is that the older son, David, had the presence of mind/idiot savant-like instinct to constantly and continually videotape the entire Friedman family throughout the entire ordeal.

My original thought to draw an analogy to Kafka in reference to the “railroading” of Arnold Friedman and his son Jesse came from this fact: initially, there was not a single complaint against either of them. The police went door to door with the roster list of names ala McMartin Pre-School and told the young boys that they knew Mr. Friedman had done something to them. Now they wanted specifics. The sex crimes unit knew that Mr. Friedman liked to look at pictures of young boys taking it up the butt; it stood to reason that he would enjoy giving it as well. Early on Jarecki catches a witness, now fifteen years older from the time of the incident, in a lie. The case seems so simple. The cops assumed Friedman was guilty and coerced testimony to that effect out of a bunch of ten-year-old boys. It would not be a leap in logic to assume that sex crimes units, like meter maids, have unspoken quotas.

The crimes themselves were almost laughable. The scope at least is certainly ludicrous, almost implausible. Jesse Friedman had close to 300 counts pending against him. As Jesse explained, the classes his father taught (and that the youngest Friedman presumably TA-ed for) were an hour and a half in duration and lasted for ten weeks at a time. That is a lot of rape in a very short time period. But then bits and pieces of the Friedman’s story start to unravel. First off, the guy was a pedophile. He admitted as much. If we have learned anything from the current Catholic Church fiasco it is that pedophiles like to rape little boys. A lot. And in secret, to boot. Arnold then admits in a letter to investigative journalist Debbie Nathan (who had been writing articles about the witch-hunt mentalities that surround child-molestation cases) that at the age of thirteen he had in fact had sex with his then 8-year-old brother. Many times. Not only that, but in his early teen years he had sex with boys and in his older teen years began to worry that he would forever be attracted to young boys. Worse still was the elder Friedmans admission in that same letter to sexually molesting two young boys where the family spent its summer vacations.

Further proof, in my mind at least, that something is rotten in Denmark, was the “documentary” evidence produced by David, the eldest Friedman boy. Feminist theorists often speak of the “male gaze” – bias inherent to the medium, in which the manufacturers of, oh, I don’t know, let’s say porn, automatically bring a “male” point of view. In other words, the message contained within the medium is presupposed. I feel a version of this is at work within David’s videos. Call it the “Friedman Gaze.” David, and the other two brothers (plus Arnold’s own, gay, brother) are so assured of Arnold’s innocence that what David captures on video is automatically tainted. Impartiality goes out the window as everything is skewed over to David’s point of view. Furthermore, the Friedman family is so used to pretending to be happy and “normal” while the cameras are rolling that they act as if they were indeed an intact family unit whenever the little red light was flashing. Even going back before the boys were born, we see that Arnold had often shot home movies of him and the Mrs. – in which they look very happy and very much in love. However, everybody familiar with them both (again, Arnold’s own brother) says that there was hardly ever much love or affection. The video record seems to be a salve for this very troubled family.

I should point out that very little affection is ever shown to Mrs. Friedman. In fact, it seems that even before the troubles began, she was often portrayed as the villain. After I thought about and discussed Capturing The Friedman’s with my girl for over an hour, it became obvious to me that the Friedman family unit is totally and completely fractured, and was so before the arrests. Again, I feel David’s videos were his way of spackling up the cracks. Now, no definitive proof is given to confirm this opinion. And therein lies the beauty of the film.

I just need to mention a little more; even though there is a “dearth of evidence,” both Arnold and Jesse plead guilty to the judge. Many of the witnesses confess on film to lying to the police because they felt at the time that they were doing the right thing. The various members of the sex crimes unit appear to be almost zealots in their forgone belief that because Arnold had kiddy porn magazines, he was also a serial child rapist. David Friedman, who oddly and sort of disgustingly now performs as a clown at children’s parties, never showed a shred of doubt concerning his father’s innocence. This is either complete devotion, total naiveté, or a little from column A, a little from column B. Arnold’s wife, Elaine, seems to be relieved, not just when Arnold is behind bars, but when her youngest son Jesse is gone as well. Jesse’s lawyer, Peter Panaro, in true Lionel Hutz fashion, has an office next to a tattoo parlor. The crux of the movie revolves around Mr. Panaro and whether or not you believe anything that comes out of his mouth. Honestly, there are probably about two dozen or more extremely important clues.

In the end, and again brilliantly, Jarecki leaves you to decide for yourself. The director himself claims not to know if Arnold and Jesse are innocent or not. I have no fucking idea, either. You really should check Capturing The Friedmans out. Make sure you go with someone intelligent (my girl’s a lawyer) because there is going to be so much to talk about afterwards. Like all Frankenstein stories, in the end the monster is destroyed. But who created this monster? Did he need to be destroyed? Was he even in fact a monster? Watch for yourself and make up your own mind.